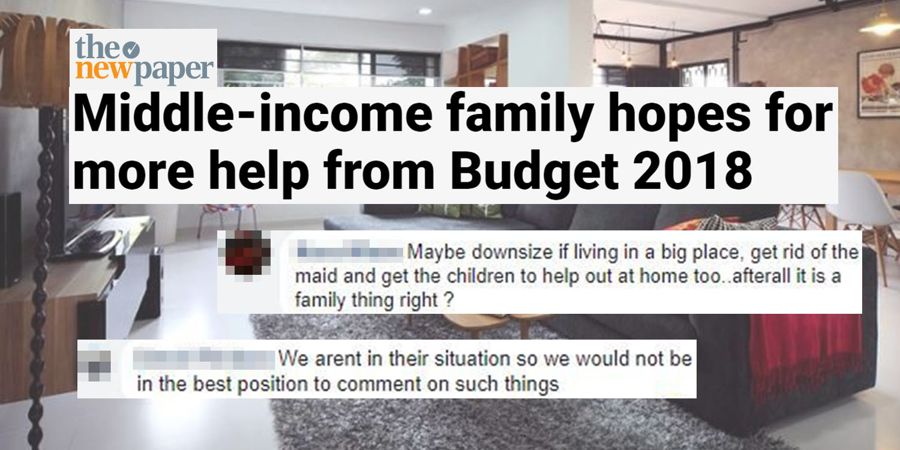 5-Figure Income But This Family Struggles To Make Ends Meet

A 5-figure income is a pipe dream for many Singaporeans. After all, the median pay here was around $4,200 last year.

But for one family, a 5-figure monthly income is barely enough to cover their monthly expenses, according to The New Paper (TNP).

An interview with said family posted on Monday (Feb 12), quickly went viral and was shared more than 3,500 times.

Netizens then flooded TNP’s Facebook page, weighing in on what they saw as poor financial management and not actual financial difficulties.

But let’s take a quick look at the familial circumstances and what netizens had to say about the matter.

Meet the Lee family. Mr Lee earns a 5-figure monthly income. We don’t know what’s his actual job or how much he earns exactly.

While Ms Lee works part-time. Similarly, her occupation isn’t stated and we don’t know how much she’s getting either.

Ms Lee recently had a heart transplant and requires pricey medication. Each pill costs $50 and she takes one a day.

But she doesn’t actually spend $1,500 monthly for her medication.

Instead, she pays less than $200 every month, thanks to insurance and “financial support”, which may refer to Government subsidies.

The Lees have 3 children, who are cared for by a maid.

Each kid also has different needs:

1. The oldest needs some $1,800 every 6 months for his polytechnic education.

2. The middle daughter is in her secondary school’s Sailing CCA. This alone costs the family $300 to $400 a year.

3. The youngest daughter is in primary school and has trouble keeping up with her studies and is believed to go for private tuition.

All these costs add up.

And Ms Lee is willing to take them on to support her children’s interests as “specific sports CCAs cost more”.

Ms Lee also hoped for this year’s Budget, to be delivered by Finance Minister Heng Swee Keat on Monday (Feb 19), to provide more financial aid for her family’s situation.

Here’s a summary of what she hopes the government will provide for her family:

Ms Lee says this would help “middle-income families” like her own who are often left out of subsidies and grants.

But for obvious reasons, some netizens aren’t prepared for their tax dollars to go towards Ms Lee’s requests.

One even neatly classified Ms Lee’s expenses as either “wants” or “needs”: 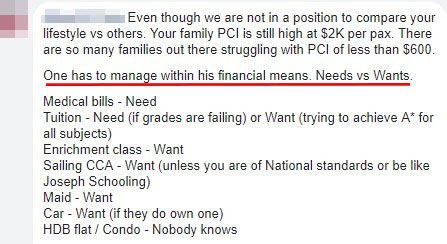 Examples of wants, he said, were her daughter’s “sailing CCA” and “maid”.

But he admitted that Ms Lee also had plenty of needs, among them medication and tuition, if the youngest daughter was failing subjects.

Many told Ms Lee to “live within her means”:

Some were on hand with “advice”, ready to tell Ms Lee how to manage her finances:

But some stood up for Ms Lee, asking readers not to jump to conclusions and pass judgment:

While others asked TNP to provide a more complete article that disclosed sums instead of using vague terms like “5-figure”:

Netizens have been riled up by this story, but it’s useful to remember that every person feels a pinch differently.

As some have pointed out, TNP provided a very vague picture of the Lee’s financial situation, so we know little else about them, like the type of house they live in or if they drive an expensive car.

Whether their requests for additional help for large families will be realised is anybody’s guess, at least until Mr Heng’s big revelation on Monday.

We’ll be waiting with bated breath.