Any Singaporean who is a frequent Facebook user should have come across the massive debacle surrounding a casting audition attended by an Indian actor, Shrey Bhargava.

The war of words has gotten rather heated, with popular social media figures like veteran blogger Xiaxue and Ah Boys To Men (ABTM) star Maxi Lim getting involved.

The comment sections have gone wild too, with Singaporeans furiously chipping in with their views on the highly controversial topic.

However, a debate that could have been a fruitful discussion on the racial situation in Singapore has turned sour and personal. Many criticisms are being directed at the commenters themselves, rather than their views on the issue at hand.

The faux pas started on Saturday evening (May 27) when Shrey shared his ABTM audition experience online via a Facebook post.

Shrey’s intentions behind the post were to highlight an issue during the casting audition, where he claimed to have been subjected to racism.

He had been asked to adopt a stereotypical Indian accent and had felt insulted that he had to portray that stereotype for the sake of humour.

He recounted feeling “disgusted” with himself for compromising his morals and participating in the audition anyway.

The post quickly drew a lot of attention from Singaporeans who fell into two groups — one sympathising with Shrey and another calling him out for making a mountain out of a molehill.

A fierce debate quickly ensued between the two groups, with both making valid points about the “racism” and “privilege” that were present in our Singaporean society.

Sympathisers felt that the audition had been a clear indication of how minorities were portrayed poorly and inaccurately in local productions.

On the other side, critics felt that Shrey was making this “non issue” a racial debate. They called him out for being an “unprofessional actor” and reminded him that exaggerating stereotypes for comedic effect has been a key feature in Jack Neo films.

Shrey followed this up with another post to answer his detractors.

With her signature caustic tone, Xiaxue blasted Shrey and his supporters for being a “butthurt” bunch and for blowing a seemingly “non issue” out of proportion.

She was also actively engaged in the comment section, responding to critics.

Things started to look bad for Shrey when Xiaxue played detective and dug up older videos of Shrey mimicking the accents, something that he now claimed to have qualms about doing. He even used to market the accents as his “talent”, she said.

This certainly changed perceptions, as many Singaporeans started seeing hypocrisy in Shrey’s complaints. If he had once been fine with exaggerating accents for humour, why was he making an issue now?

In an attempt at a comeback, Shrey tried to explain his past folly and apologised for his previous mistakes. Popular ABTM star Maxi Lim had also revealed in an earlier Facebook post that Shrey had asked him to put in a good word for him.

By this time, many netizens had had withdrawn their support for Shrey, as they felt that he had not been completely honest with them.

However, many still seemed eager to battle it out over whether the issue of racial privilege was plaguing our Singaporean society.

Unfortunately, a rational debate was no longer possible, as the whole issue had turned sour.

Name-calling by commenters on both sides and the unnecessary use of profanities had turned the debacle into an ugly war of words. 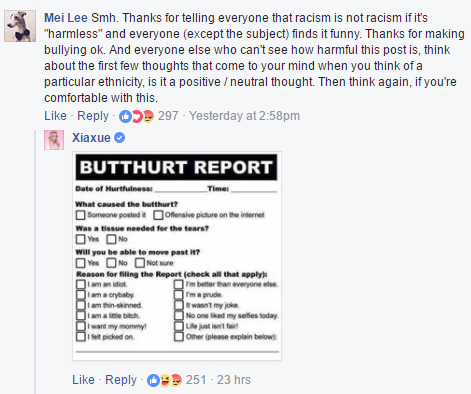 The few netizens who were genuinely interested in having a fruitful discussion were also faced with many netizens who insulted their beliefs, all in the name of being “savage” and “real”.

Many more decided to harp on Shrey’s hypocrisy and failed to realise that despite his slip, Shrey had raised a valid point about our media industry — Does Chinese privilege and racial stereotyping, and even discrimination exist in the local film scene?

In a rather admirable attempt to take the discussion on a more objective and civil path, one netizen, Mr Tushar Ismail, asked Shrey out for a conversation on the topic, with no strings attached.

The post caught the eye of a producer, Mr Sylvester Pillay, who offered to host the talk. He even assured the two parties that they will be paid for the event. 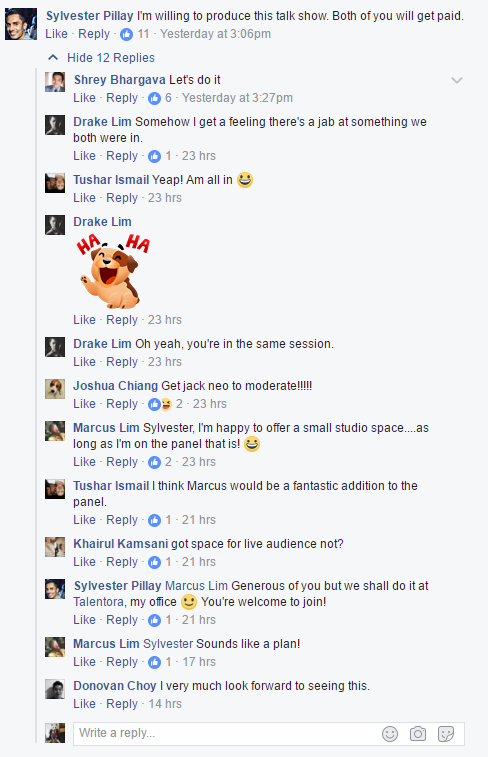 Looks like it’s going to be a really interesting video.

If this fiasco is proof of anything, it is that issues get overblown very easily online.

In a multiracial country, it’s important that progressive, objective conversations can be held among citizens. If people don’t keep their cool, the chance for understanding each other’s perspective better is lost and this can quickly lead to the nation becoming more polarised.

Let’s hope the talk show does happen and some positive discourse comes out of it.