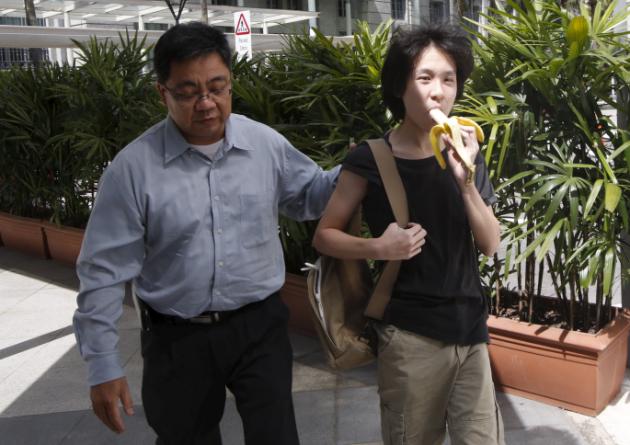 The subversive one has flouted his bail conditions

Last time on The Adventures of Amos Yee, a youth counsellor had just bailed him out. Amos then proceeded to obey his new bail conditions which included reporting to a police station daily to check on him, and to make sure he doesn’t post anything online.

Seemingly fed up, Amos Yee has taken to social media and his blog to complain about his bail conditions, in effect forfeiting the $20,000 used for the bail.

In a string of Facebook posts, Amos detailed the draconian bail conditions, such as privatising his content, and having to travel to Bedok Police Station daily at 9 am, a timing when he is usually asleep.

Professing his non-repentance, he decided that he would not “submit” to the judge and prosecutor, and started posting online again. We’re not sure if he consulted his lawyers beforehand.

Highlights of his posts

He made many posts within the hour, both on Facebook and on his blog, so we’ll pick out a few “better” ones.

1. The first one, a decision to post online despite not being allowed to do so

2. Amos forgives the grassroots leader who wanted to serve Amos’s pee-pee on a platter 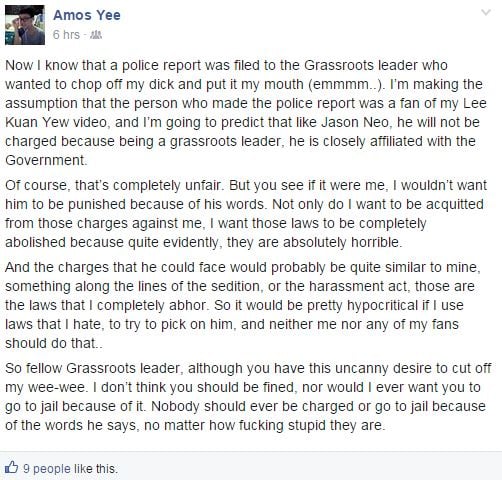 3. He wants his stuff back 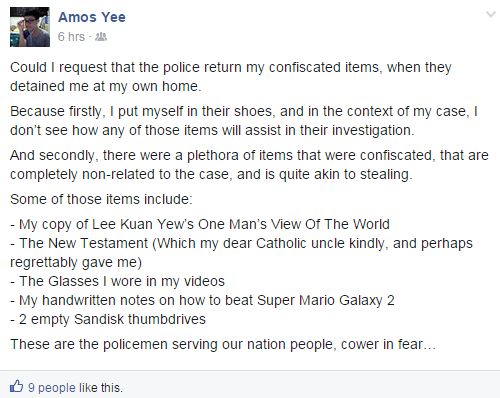 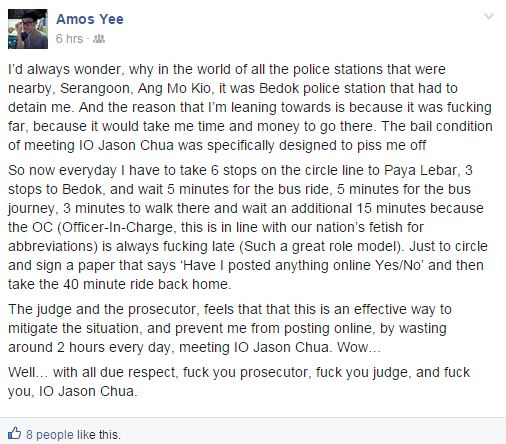 5. He talks about his father

This is in the form of a blog post, which can be found here.

In an amazing lack of understanding of societal norms, Amos details an event which occurred before his hearing, about his choice of clothing. His insistence on not wearing more formal clothing to the hearing caused a violent altercation between his father and himself.

Why he decided to share it now may be because he’s decided the bail conditions do not matter, but who knows? Perhaps he was angered at the comments of certain Mediacorp celebrities who claimed that his parents were to blame for his behaviour:

Why the beef with Mediacorp actors? We’re not quite sure either.

He also seems to take umbrage to his dad’s method of ‘caring’.

Amos ends the post off with a plea for help.

If Amos Yee has received counselling, he hasn’t learned anything from it. Even the most ardent fan of Amos Yee would be questioning his motives right now. He gains very little from making these posts, besides ridiculing the bail conditions which only the judge can decide.

Or maybe he likes being in remand without anyone to bail him out. We can’t really imagine anyone elsewilling to essentially throw away $20,000 to bail Amos out another time.

Oh, and his next pre-trial conference is today. Will his posts swing the tide against his favour further? Is the story about his dad even true in the first place? Will he whip out another banana for the cameras?

Stay tuned for the next episode of  The Adventures of Amos YEEEEEE!!!!