Must Share News – Independent News For Singaporeans
Home Lifestyle Avengers: Infinity War Is Almost Sold Out In Town. Here’s Where To... 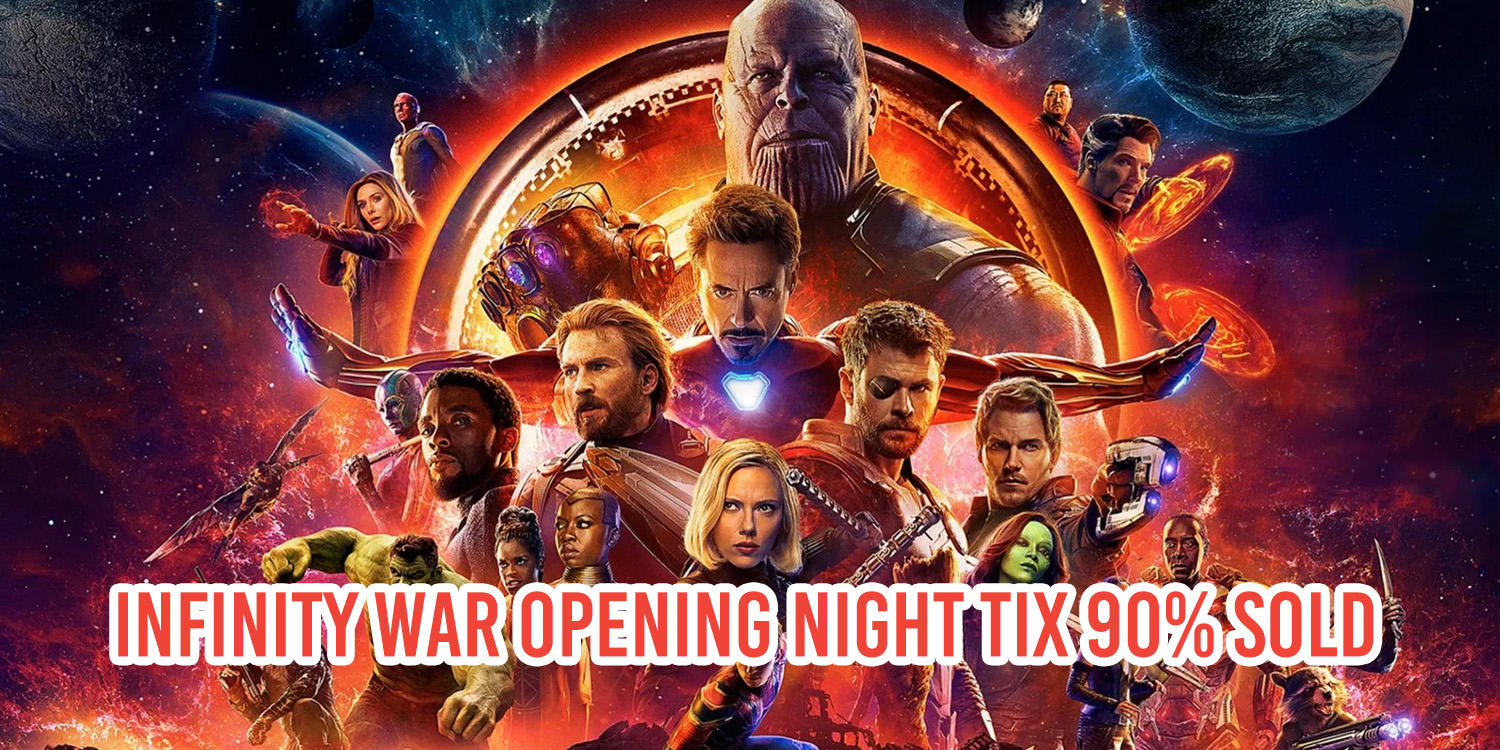 You may or may not have heard that Avengers: Infinity War is coming out soon. In 9 days, to be exact.

Hopefully you’ve already got your ticket.

If not, here is a handy guide to ensure that you get to watch Thanos deliver the smackdown to Earth’s mightiest heroes on release day.

And from a seat that won’t leave you deaf on one side, with neck pains to boot.

Not every seat is a good seat

Contrary to the oft-repeated phrase, not every seat is a good seat.

Tickets have gone on pre-sale and response has been…enthusiastic, to say the least.

Just look at the number of filled seats at The Cathay for 7:45 pm on opening day. 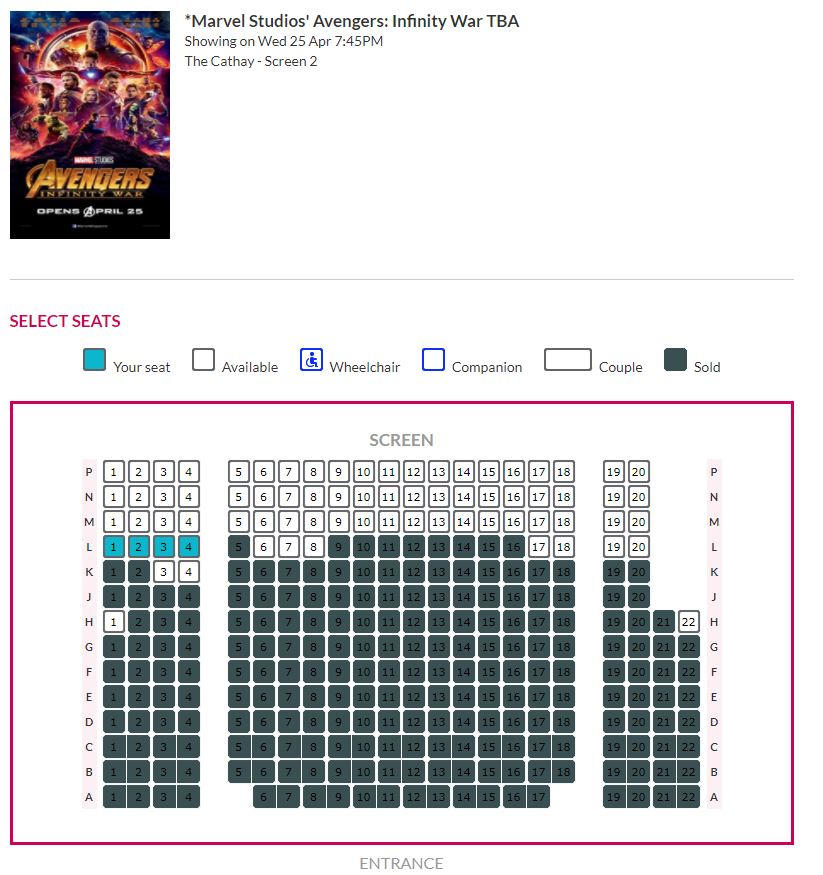 Let’s just say it’s better to be kiasu. This one time, at least.

While it might be convenient to choose a central location in town, it may sometimes be better to bite the bullet and ask your East-side dwelling friends to make the Journey to the West. Or vice versa.

Next, this guide assumes that you’re gonna be watching this after work or school.

If you have the spare time to catch a flick at 11:30 am, we hate and wish we were you in equal measure.

Last of all, what defines an optimal seat?

Sit too close to the screen and you’ll have to deal with a stiff neck the next day. Veer to far towards one side and one of your ears might feel lonely.

Luckily, this is already a much-discussed topic.

The common consensus for the best seats in the house is:

About two thirds of the way back, as close to the center as possible.

Let’s get you those seats.

Unfortunately, it seems that Singaporeans have caught onto the trick.

Northerners, you’ll have to make do with a slightly-off-centre view of the action if you want to drop everything after work and head to the theatre. 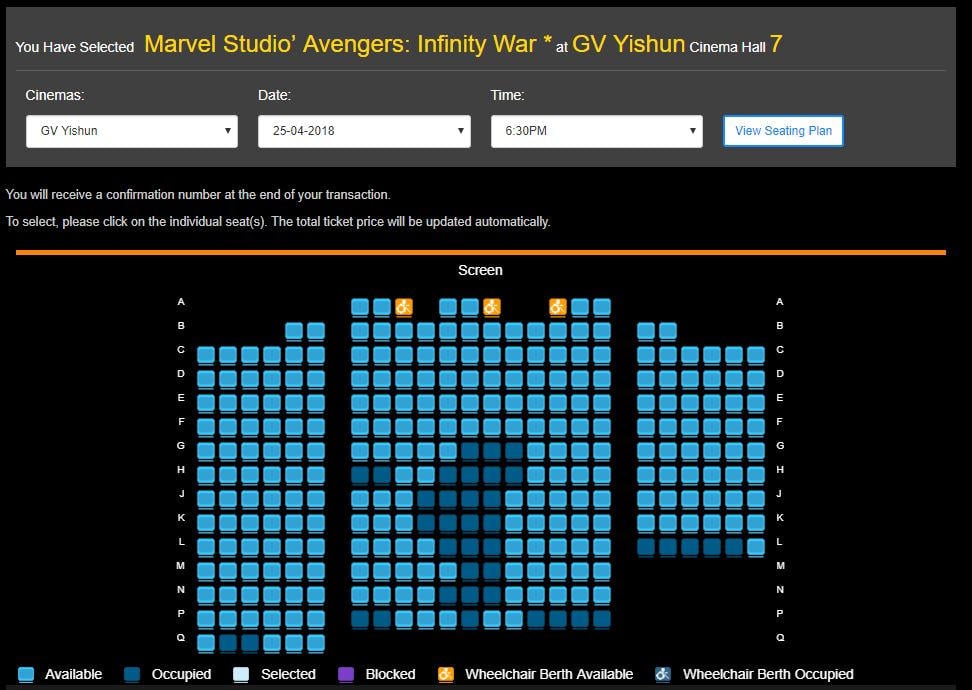 If you prefer taking your time, you’ll have to contend with a sub-optimal seat.

With an estimated run time of 2h 40m, choosing a time later than 9 pm would mean that you’ll have to look alternative means of transport home.

Competition is tougher here in the west side. 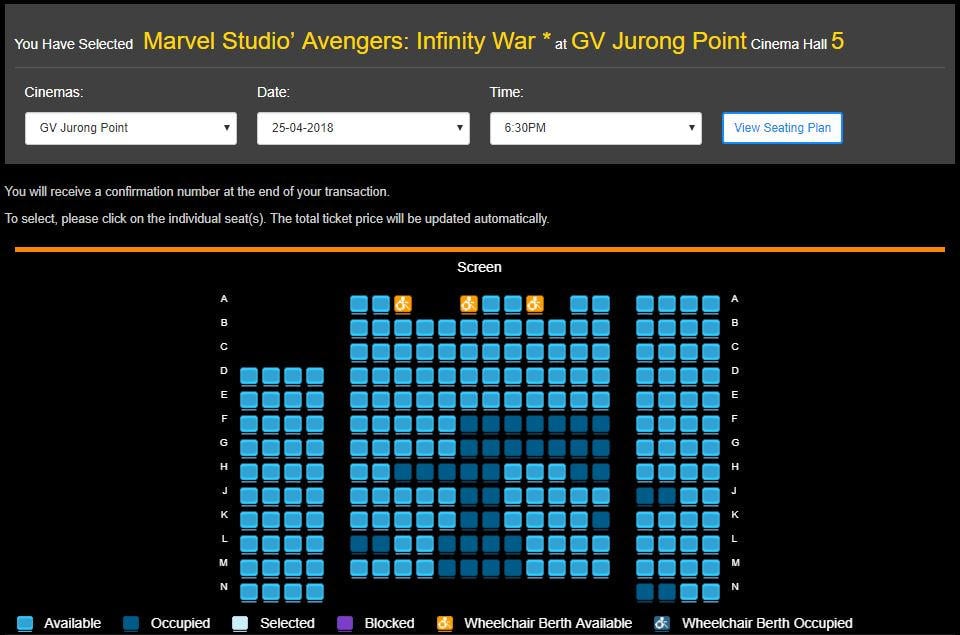 Singapore’s most accessible MRT station is also home to the cinema with the largest number of optimal seats. 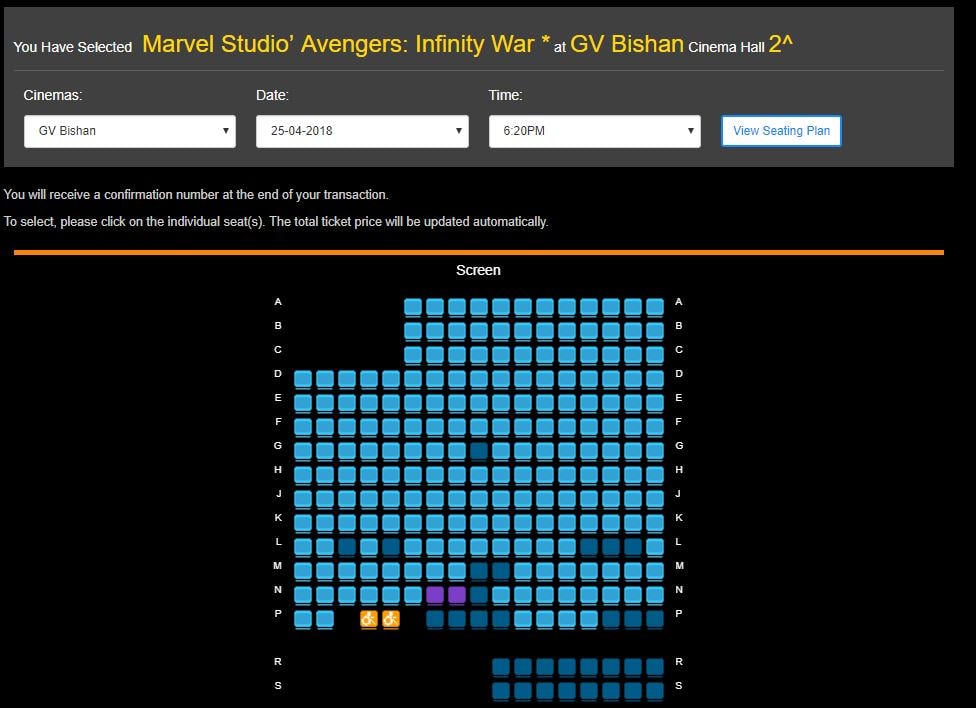 Don’t expect that to last, though.

Unfortunately for denizens of the East, the earliest appropriate timing (7:10 pm) already sees a near-packed house.

If you absolutely have to watch Avengers at Tampines, be prepared to stay up late.

Alas, it seems that we won’t be able to book a Shaw cinema ticket in advance.

For now, at least.

According to their Facebook, they “currently only have plans” to screen Avengers: Infinity War in the more expensive IMAX 3D format.

Pre booking is only available for IMAX 3D screenings, which are $22 a pop. No thanks.

Guess we’ll have to stay tuned for news on this front.

Fans of Cathay cineplexes – do not rejoice.

You couldn’t get nosebleed seats even if you wanted one. 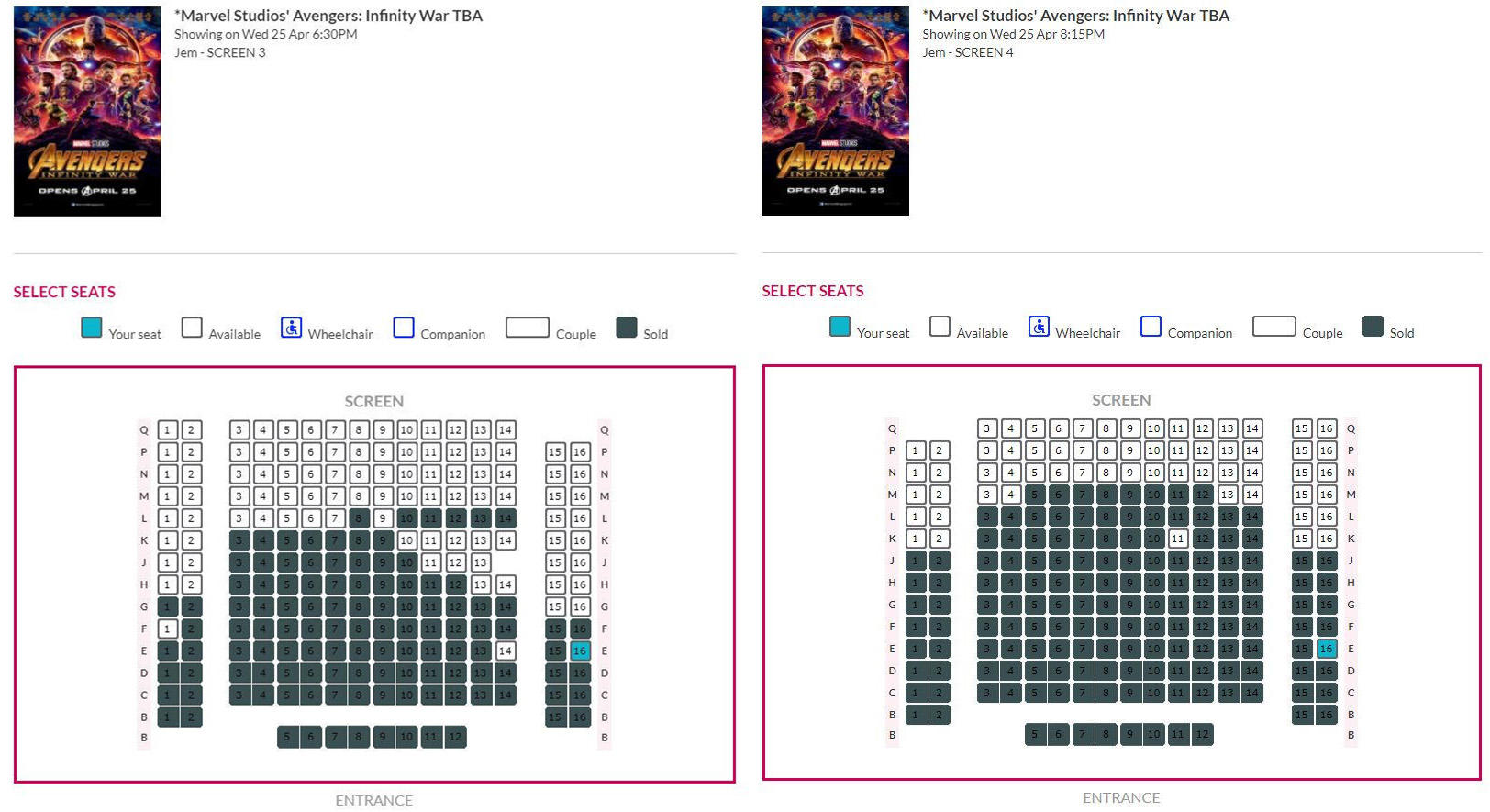 You can consider alternative timings though.

Heartlanders: be prepared to rush home straight after work if you book seats at these timings.

Bukit Buttock no more. Clearly seats are more available in this cosy theatre.

Bask in the acoustic glory on your first-of-many watches of Infinity War.

If you enjoy a tucking into a hearty meal before sinking into a food coma of explosions, web-slinging and moon-throwing, you’ll have to learn to enjoy craning your necks too. It’s an acquired taste. Just like the scope of the movie, the demand for the movie has exceeded all expectations.

Faster assemble your friends and get your tickets. 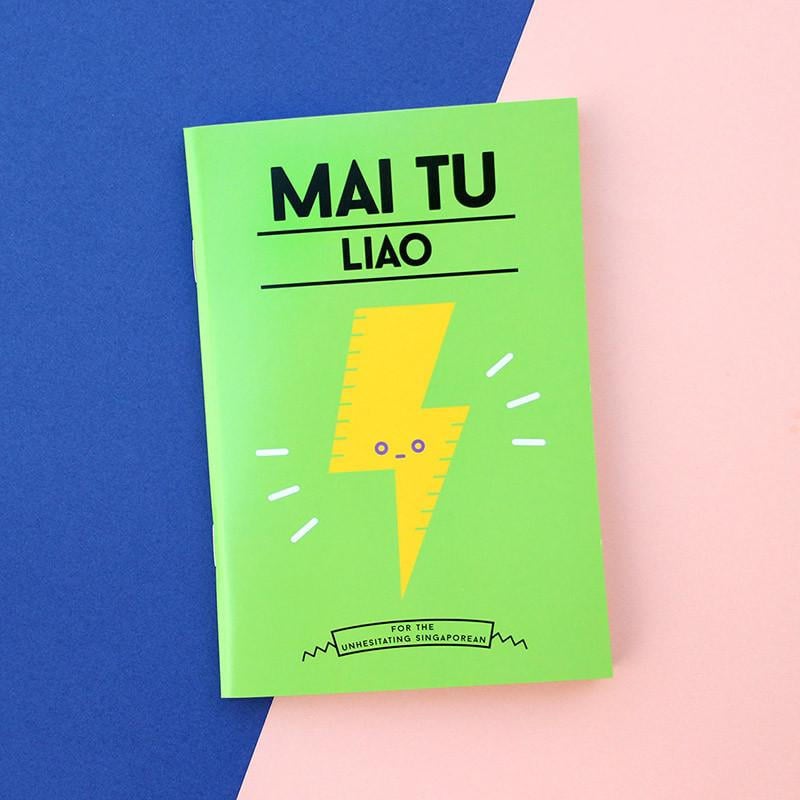 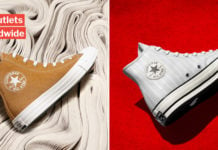 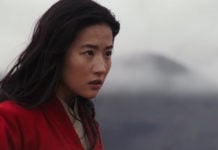 Mulan Opens In S’pore Cinemas On 4 Sep, No Need To Wait For Disney+