Dr Cherian George has no qualms taking on big institutions having spoken out against his former employers Nanyang Technological University and even the Singapore government. His latest victim comes in the form of the renowned British Broadcasting Corporation (BBC).

In a Facebook post on 24 Oct, Dr George criticized the BBC for wrongly reporting on Singapore’s latest traffic management. 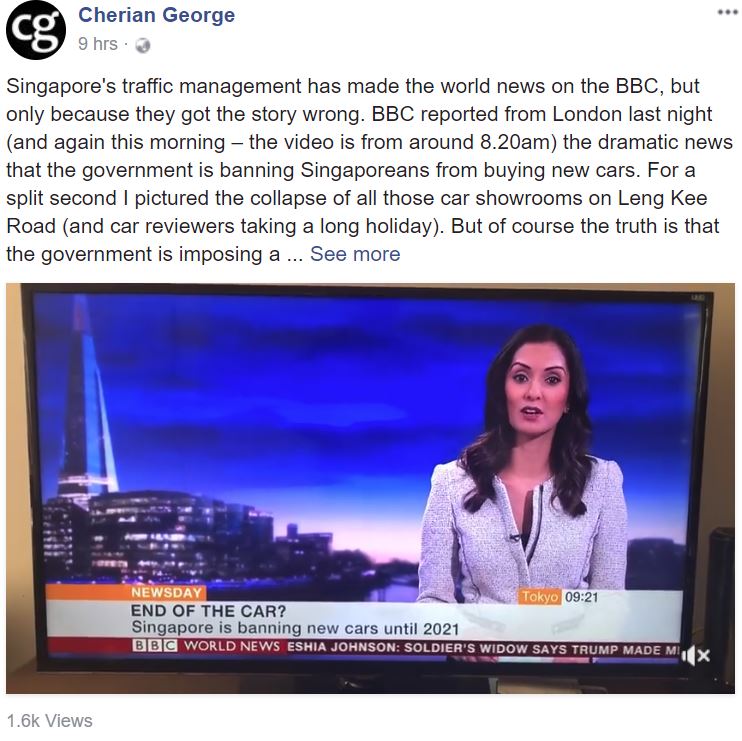 In the video, the BBC reported that Singapore would be banning the sale of new cars until 2021.

Now before you scream in anguish that your dreams of owning a car will to be put on hold till after 2021, here’s the real news.

In a press release on 23 Oct, the Land Transport Authority (LTA) announced that it would be restricting annual vehicle population growth to 0% with effect from February 2018. This comes as a result of Singapore’s land constraints and the Government’s “commitment to continually improve our public transport system”.

The current COE quota allows for a 0.25% growth in vehicle ownership per year based on the vehicle population as at 31 December 2016. This some also takes into account vehicles that are deregistered in July to September 2017.

The vehicle growth rate will be reviewed again in 2020.

Now, this does not mean that the sale of new cars will be banned. Instead, COEs for car ownership will be sold only after the same number of existing COEs expire. As such, the LTA will be able to ensure that the number of vehicles on the road remains relatively constant.

With BBC’s morning show in Asia being hosted in London and Singapore, Dr George was “surprised” that the Singapore newsroom didn’t catch the mistake. Luckily for us Singaporeans, the journalism was on hand to school the media and correct the error.