Killed Due To “Bird Flu”

In today’s episode of “The AVA Changes Its Mind Again”, the Agri-Food and Veterinary Authority (AVA) now claims that the chickens at Sin Ming Avenue were “put down due to concerns over public health and safety and not because of complaints over noise”, according to Channel NewsAsia.

Don’t take these words to heart though, they might change their mind again tomorrow. The AVA did give a different official reason just last week — saying they culled the chickens due to noise complaints from nearby residents. 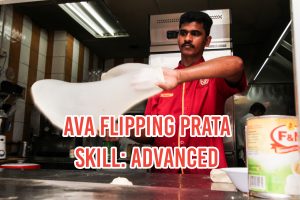 On Monday (Feb 13) though, the AVA said that the noise complaints merely served to bring the issue of freely roaming chickens to their attention, and that the actual reason for culling was the potential health risks these chickens can bring.

Interesting, AVA. Doesn’t this make us wonder what AVA has been doing for the past few years?

As a governmental agency that is responsible for healthy animals and food products in Singapore, why didn’t the AVA notice the existence of these oh so dangerous, disease-spreading chickens earlier?

After all, residents in Sin Ming Avenue have been seeing these lethal chickens for at least the past 22 years or more. The BBC even made a documentary about them, claiming they were endangered red junglefowl.

In a very timely post on his Facebook page on Tuesday (Feb 14), Prime Minister Lee Hsien Loong also got in the mood for love via some friendly chickens that happen to live just next door from him:

Apparently, Mr Lee likes to take photos of the rooster who belongs to his neighbour. 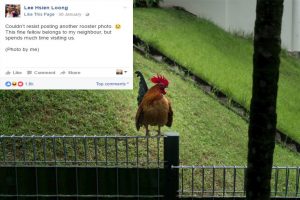 Given the AVA’s stance on bird flu, we can’t help but worry over this dangerous creature entering our beloved prime minister’s house.

As the health of Singaporeans is of AVA’s utmost priority, shouldn’t PM Lee’s health be the No. 1 priority? How could AVA let this happen?

When will be the AVA be coming to Mr Lee’s estate to cull these feathered menaces?!?

Some commenters on Mr Lee’s most recent Facebook post felt the same way, pointing out that the bird was a health risk:

Other Things To Cull

Nevertheless, now that AVA has made its stance clear, it has created more work for itself.

According to commenters on Facebook, it seems like there are many other organisms that the AVA now has to cull, including themselves:

Other countries also have large numbers of free roaming birds. Are they also adopting the same measures?

Seeing as how they are also at risk of being on the verge of a bird flu epidemic, this Facebook user has a solution:

On a serious note, the AVA has pulled off a great feat in somehow making an already bad situation somehow worse.

Nobody is pleased with the AVA’s prata-flipping over this issue:

It’s clear that AVA only changed its tune due to public criticism for culling the chickens solely based on the complaints from a minority of complainants.

But making excuses for a controversial decision by totally changing the script only adds fuel to the fire and reinforces the misconception that public service agencies are high-handed and cannot be trusted.

The AVA would have eased the situation by actually apologizing for what many people thought was a bad move. But owing up to one’s mistakes is apparently no longer in fashion.

It seems like AVA never learns its lessons. First, choosing culling when relocation is obviously a better option.

And then, an even more serious error of judgement: Thinking that Singaporeans are stupid and hiding behind a string of excuses instead of offering a sincere apology.

They need to learn some basic PR skills. Even they did not want to apologize, they could have kept quiet and let this uproar abate naturally with time.

But instead, their poorly received statement basically kept this saga going beyond the normal news cycle.

We’re disappointed in you, AVA, and your highly paid civil servants and illustrious scholars.

The chickens are disappointed in you too.

We hope to see better from you in future, but we’re not holding our breath.