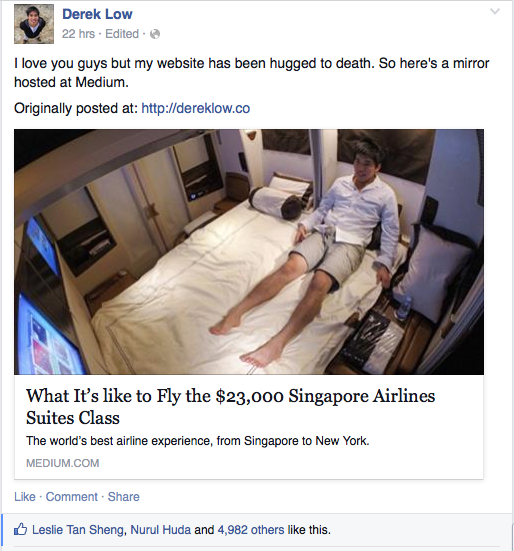 Over the past few days, you would have probably frothed, salivated, grew jealous and then cursed under your breath over blogger Derek Low’s review of a luxurious $23,000 Singapore Airlines Suites Class trip he flew on from Singapore to New York. If I ever had to pay that much for a plane, it better have a stopover in heaven. The story was basking in glorious social media limelight but is now burning online for all the wrong reasons.

Why? Derek apparently plagiarised parts of his review from various sources and the original writers have sniffed him out for it.

Hell hath no fury like the online anti-plagarism brigade released. They tore his story down to shreds and found entire chunks where content was obviously taken from other blogs with no mention of where Derek got it from.

Maybe he was bankrupt with words after the pricey trip. Some of the sentences matched word for word.

Or maybe SIA’s world-class service was not enough for a genuine review from “Princess Derek”, as he considered being called in his blog post.

It doesn’t end there.  When the social media mob unleashed their thoughts, pointing out the discrepancies on his website and Facebook page, he apparently deleted their comments and blocked some users. Yes, the original author called him out and had his comments deleted. The original author was also blocked from accessing the page.

Shame On The Copycat!

The biggest shame was that Derek had great photos and a good story in his hands, one that was enough to turn many social media ‘pages.’

He was an average Joe like most of us, being treated like a king in the skies is a worthwhile tale on its own. Derek had an insight into a lifestyle most of us would never get to experience apart from reading about it. Plagiarism is not just about infringing the law, passing off someone’s work as your own steals their opportunity to be recognised.

While the lines can blur sometimes, the Internet passed it verdict and Derek clearly got into trouble for something he didn’t write.