In the Parliament debate about the Budget 2015 last week (3 March), MPs Tin Pei Ling, Hri Kumar and NMP Chia Yong Yong raised concerns about the Government’s perceived social spending and its sustainability in the long run. In response, articles have appeared on The Business Times and The Straits Times, weighing in on Budget and the Government’s ability to spend.

According to these articles, the MPs’ claims about sustainability and social spending are unfounded, and the Government has enough reserves to fund future social spending.

1. The government factors in future spending into the year it is launched

Government calculates all projected spending into the year’s losses, even though the spending will last over several years.

For example, the Pioneer Generation Package resulted in $9 billion put into 2014 spending even though payouts will occur over about twenty years.

2. Singapore’s social spending as a percentage of its GDP is 8% over the past five years – far less that of other first-world countries

While social spending is expected to increase to 19% over the next 5 years, Finance Minister Tharman does not expect reserves to be depleted as a result.

3. The government is not using all of its reserves for social spending – far from it

The government is still largely conservative with its funds, and here’s why.

Adding Temasek’s Net Investment Returns (NIR) will only account for half of Temasek’s earnings.

MP Hri Kumar was one of the critics of this move, stating the government does not have the ability to support the increased spending in the long run.

Minister Tharman suggested that the amount allocated to social spending is considered “safe”, despite reported deficits of $6 billion, which is actually balanced out by the surplus of the previous years’ Budgets.

Under the Constitution, Singapore needs to keep a balanced budget over each term of Government, which is five years.

Singapore does not borrow money to fund the Budget. Talk of Singapore’s lack of reserves is unfounded when 50% or more of NIRs are unused and land sales revenue is not included in the Budget statement.

In conclusion, the overall stance may have shifted leftwards, but not enough that Singapore can be called a welfare state.

4. Confusion about our reserves stems from its presentation

MPs such as Hri Kumar do not appear to know about the Government’s policies because we have not drawn from reserves directly — instead, only NIR is used.

He also mentions that government spending is largely a one-way street — this is untrue when most of Singapore’s revenue comes from taxes!

There is indeed a misconception about our reserves when even MPs don’t know exactly what we do with them, and how much we take to fund social spending.

NMP Chia Yong Yong was most outspoken about the increased social spending, saying “if we lean too much to the left, we will not have much left”. Her Doomsday scenario may apply to welfare states, but Singapore is not even close to being one, for now.

5. If we complain about sustainability, what should the money be used on other than social spending?

If for example, the Government spends less on the public, how will the low-income group cope with rising costs?

By complaining that social spending is too high, are MPs suggesting that the Government to leave this group alone? They do not elaborate. Instead, the elected officials like Tin Pei Ling attacked the low- and middle-income group for not saving up for their future and claims that the Government should not provide for them.

SkillsFuture was talked about as being good for the public but giving $500 to everyone (working out to $1 billion a year to be set aside from now to 2020) represents a greater risk for misuse. Yet, fewer MPs raised concerns about SkillsFuture than for the Silver Support scheme.

The message is clear: social spending = bad. Perhaps the MPs neglected to remember that their own salaries are being drawn from the same taxes used to fund social spending.

Revenue sources, debating for the sake of debating, policy direction 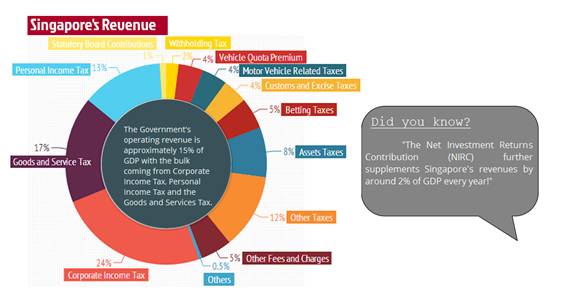 Since most of our revenue actually comes from taxes, more attention should be paid to taxes so that the public is not taxed too heavily for no reason — something also not brought up in Parliament, because social spending is apparently a greater cause for concern than taxes.

We’re also pretty sure the MPs were elected to not “wayang” (play-act) in Parliament and act like they know what they are talking about when they don’t. At least, that’s what Donald Low, Associate Dean at the Lee Kuan Yew School of Public Policy, is saying.

In questioning the increased amount of social spending, there was no alternative cited. This problem exists because the Government has not drawn a line on its policies — should it make a hard left (towards more social spending) or hard right (focusing on the economy and having plenty of reserves for a rainy day)?

While WP MP Sylvia Lim has applauded the Budget for being more left-leaning, overall spending is still very much on the right, thanks to the Government refusing to use its reserves except for emergency purposes. The 50% cap on NIR is also still there.