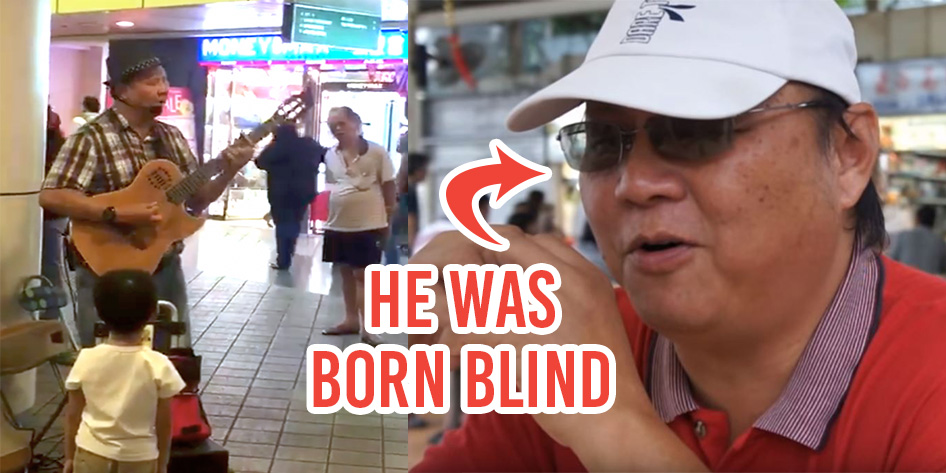 A performance by Mr Daniel Ng, one of Singapore’s most popular street singers, went viral over the past weekend.

The video was first captured outside Toa Payoh MRT station and uploaded by netizen “Kenii Wonga” last Friday (July 28). Facebook page The Alternative View re-uploaded the video a day later, where it has since racked up over 110,000 views.

Why was it so popular? Because it spoke to something that Singaporeans are always concerned with — the rising cost of living. And he sarcastically named 3 Cabinet ministers as the “answers” to why Singapore is getting more and more expensive to live in.

Check out his masterpiece here.

Oldie With A Twist

In a unique lyrical twist to Bob Dylan’s “Blowin’ In The Wind”, a song from the 1960s, Mr Ng incorporated spoken commentary into his rendition and lamented the rising costs of living in Singapore.

He also replaced the iconic last line of the chorus “the answer, my friend, is blowin’ in the wind” — instead naming Mr Lawrence Wong (Minister for National Development), Mr Khaw Boon Wan (Minister for Transport), and Mr Gan Kim Yong (Minister for Health) as the “answers” to the lack of public housing, failing transport system and increasing healthcare costs respectively.

As with anybody who produces content critical of the government, netizens started fearing for him. Some thought his busking licence was going to be revoked, while others went as far as to suggest he would be arrested. 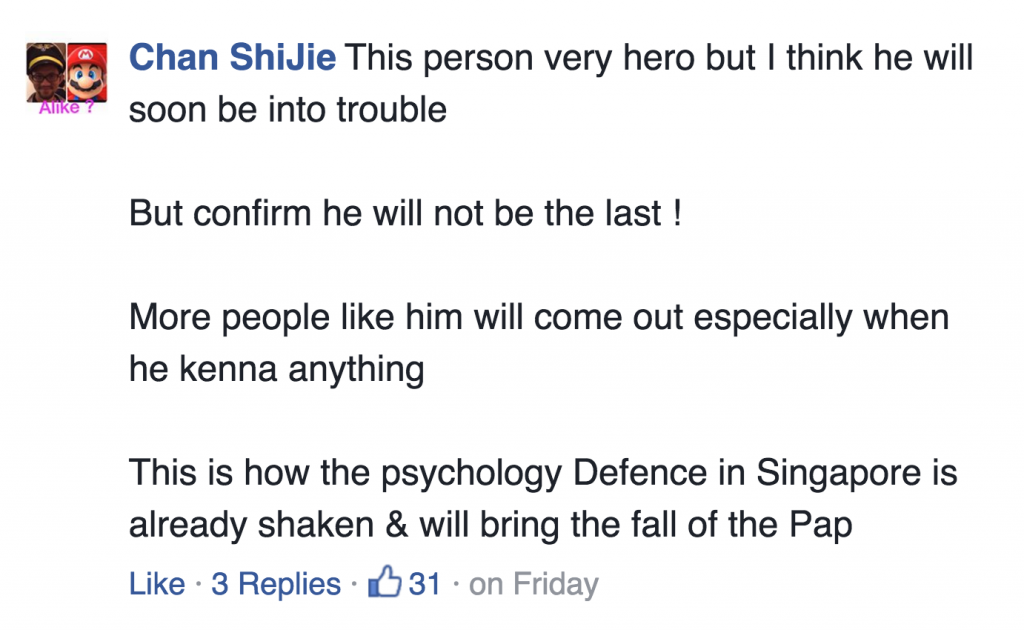 Oddly enough, the Lianhe Zaobao did a write-up on him soon after on Sunday (July 30), as part of a feature story about street performers in Singapore.

It reported that the 58-year-old switches effortlessly between Mandopop, Hokkien classics and English numbers, all while playing his harmonica and/or guitar.

Here are 5 things we have learnt about the talented musician.

1. He was born blind

While it’s hard to tell from the low-resolution video filmed under horrible lighting conditions, Mr Ng is visually-impaired. 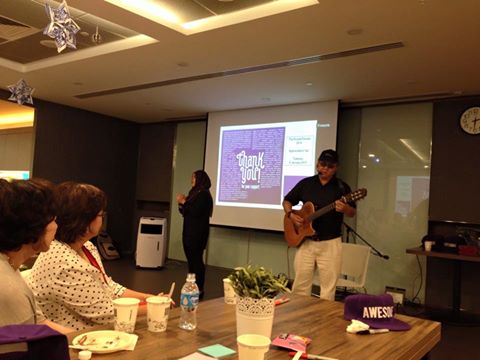 That did not discourage his musical efforts though — he learnt to play the guitar and formed a band called “Extra Touch” at the tender age of 17.

Mr Ng was actually working as a call operator in the public sector for over 18 years before quitting to busk in the streets. Following encouragement from his wife, he decided to become a professional musician and applied for a licence under the Busking Scheme in 1999, 2 years after the National Arts Council launched the initiative.

2. Most people love his performances

His song covers and parodies have notched up hundreds of thousands of views online, with many praising his soothing voice and impeccable control of his guitar.

And when Mr Ng sings “live”, a generous round of applause from curious onlookers can be heard everytime he finishes a song, as he smiles sheepishly and thanks them for their support. Sometimes, members of the public would even pat his back and buy him drinks to spur him on.

This is what he said about his adoring public:

When busking first began in Singapore, the public didn’t know how to react to them. Things have improved significantly since then, with many knowing how to appreciate the efforts of the performers.

Not everyone takes too kindly to his cheery attitude and (occasionally) controversial song topics though.

Some people would walk past me, intentionally raise their voices and exclaim that I’m being really noisy.

One even went as far as to demand that he stop playing his anti-government parodies, after he adapted the lyrics of a popular Hokkien song to criticise the Central Provident Fund (CPF) system.

Given his fluency in Hokkien and Mandarin, would you have guessed that he had close to zero idea how to speak the language till 10 years ago?

Back in the 60s, Mr Ng was only taught English and Malay (see video below), and it was only when fellow busker Kelvin Tan — also the winner of Project Superstar in 2005 — brought him to the Guan Yin Temple belt along Waterloo Street that he began to realise how popular Mandarin is.

He eventually became proficient with the language, but being visually-impaired made it difficult to pick up new songs. Mr Ng has to first gather inspiration from singing shows like Sing! China, before memorising the lyrics and reproducing the arrangements by ear.

Perhaps teens nowadays who shun Chinese religiously could learn a thing or two from him.

4. He thinks some disabled street performers are not up to par

Not one to mince his words, Mr Ng laid into the standards of some of his fellow disabled buskers.

I feel some of them are not improving enough. People might think I’m being arrogant and disagree with me, but it’s crucial to keep improving yourself. Take my career as an example. I used to only sing English songs, but after realising the earnings potential in covering Chinese songs, I made the effort to learn them.

With that being said, Mr Ng praised the overall attitude of street performers in Singapore now compared with yesteryear.

Young Singaporeans are now more willing to hone their crafts on the streets and are no longer ashamed of being a busker. They’re really good at what they do too, whether it’s singing their own works or even rapping.

He also thinks it’s hard to survive busking full-time, but noted that it was a way for aspiring singers to fulfil their professional ambitions.

For those who wish to see Mr Ng perform “live”, well, we have both good news and bad news.

The good news is, we know he performs on evenings during weekdays at various food centres and MRT stations. “I want to help the working class relax,” he says.

The bad news is, we do not know his exact itinerary — Mr Ng has been spotted across the island, so it’s hard to pinpoint where he’ll be performing on a given date.

He did consider releasing an album, having already written “5 to 6” songs, but feels like giving up due to self-doubt.

When you write a piece of music, you have to convince yourself that it’s good, and that depends on your mood. Inspiration is also another factor. I don’t want to force myself to write if I don’t have any.

I’ll probably stay home and compose more songs when I retire from busking though.

Well, there’s always YouTube (thankfully), and we’ve linked some of his works for you to enjoy from the comforts of your devices.

The following two songs are perfect for rainy days:

When Can We Retire?

While Mr Ng’s parody was meant as a light-hearted jab on the authorities for not fully understanding sentiment on the ground, some of his lyrics do provide serious food for thought.

The best bits of his song came at the end when he asked how long must Singaporeans work before “having enough to retire”.

There was also a particularly poignant moment towards the end of the video when a young boy stood inches away from him while an old man watched on from a distance. 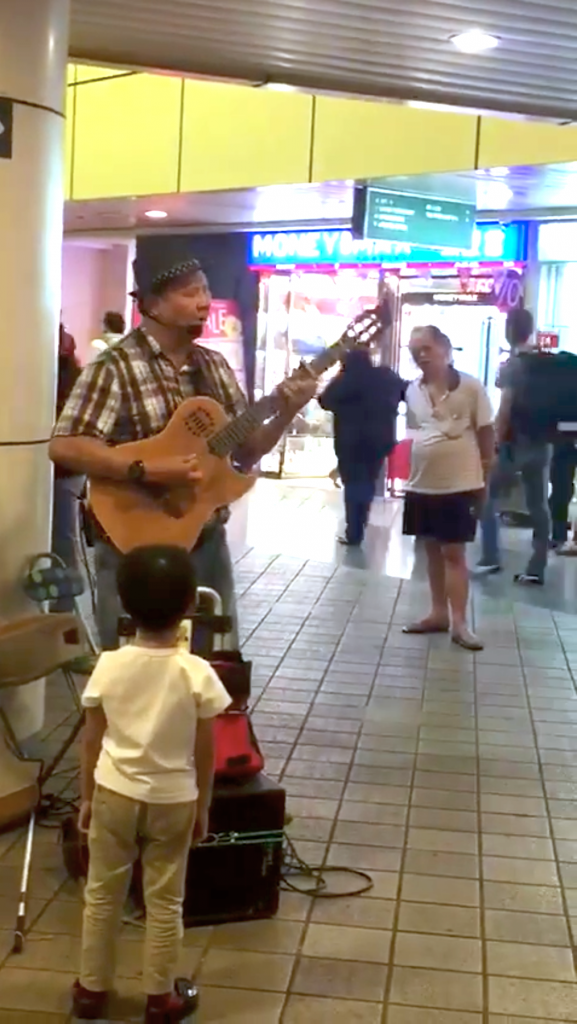 Both were thoroughly captivated by Mr Ng’s performances, and in a way, their cameos symbolised the message of his parody — the elderly aren’t able to retire comfortably, and things are only going to get worse for our future generations.

As Mr Ng has a wife, a 29-year-old daughter and a 23-year-old son, he’s probably feeling the pinch like most of us.

We admire his perseverance and courage to pursue his dreams despite being disadvantaged, and salute him for highlighting the problems plaguing the common folk in our country without being tactless.