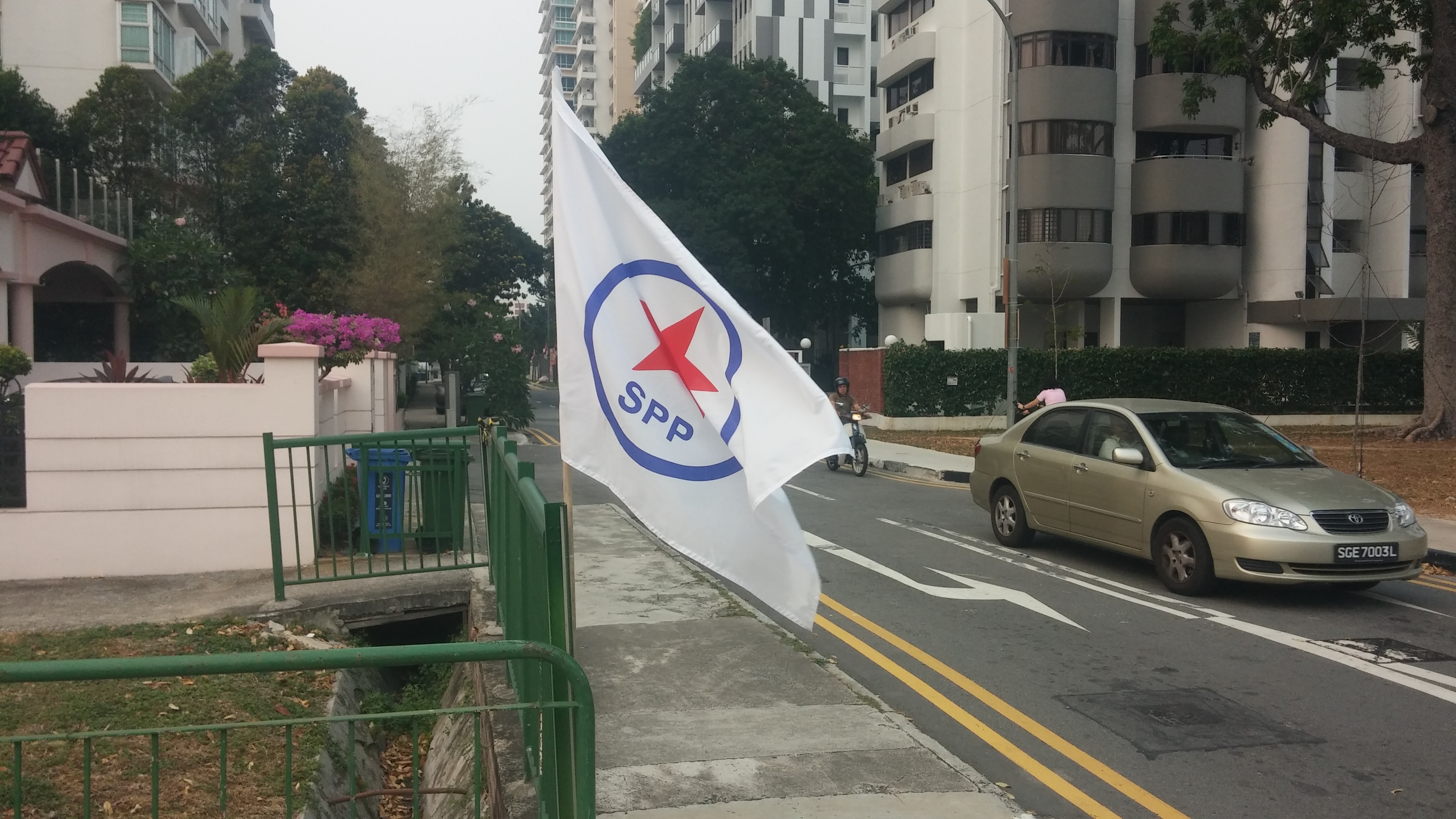 For today’s coverage, I decided to head down to the little town of Potong Pasir, a town which saw the closest contest in the last General Elections — a difference of just 114 votes.

Today (8 Sept), the Singapore People’s Party will be holding a rally here. Of course, Potong Pasir holds a very unique place in Singapore political history — with 27 years of PAP defiance on record, it is the longest opposition-held ward in Singapore’s history. 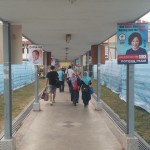 I would feel like I’m walking back into Singapore in the 1990s, if not for the sky-high cranes and the construction works going on all around the town — evidence that the PAP incumbent, Sitoh Yih Pin, has been doing some work in the town.

I’m curious as to how many Potong Pasir residents would welcome these upgrades though.

Lift upgrading and replacement of old and worn-out playgrounds — those I can understand. But I wouldn’t be too happy if a sky-high condominium was going to be built in the middle of Potong Pasir, as it was in Kovan where I lived a few years ago.

But enough about these concerns, and on with the rally. 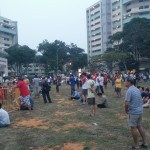 6:45 p.m: There are very few people milling around. I guess they’re familiar with the SPP’s way of starting rallies late. I wish I had spent a bit more time walking around the quiet town — there’s really no other town quite like it. 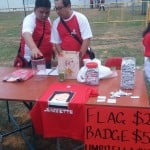 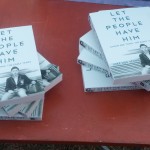 There are a few shop booths set up by SPP members. They’re selling Jeanette For Mountbatten badges, SPP umbrellas, and a biography of Mr Chiam’s life entitled “Let The People Have Him”. I would certainly consider reading it if I had a long journey to make on a plane. It’s just $20.

7:30 p.m: A car full of SPP candidates and friends finally arrive and there’s a large commotion among the crowd, which has steadily grown to almost a thousand strong. They chant ‘Lina Chiam!’ and ‘Potong Pasir!’ fervently. The candidates take their seats on the stage.

The SPP, after all, are one of the smallest parties in the 2015 elections, sending just 8 candidates and even having to form a joint team with the Democratic Progressive Party. So they certainly can’t be using everyone at every rally.  I take the chance to go up to some of the nearby HDB blocks to get a few aerial shots. I can still hear him speaking from the 12th floor. 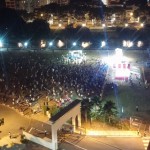 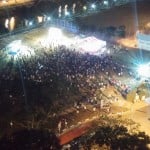 He speaks in Mandarin, but in typical Singaporean style, it’s interjected with several English substitute words.  He talks about his respect for Mr Chiam and how he is almost an idol among his generation.

Mr Chiam, after all, was one of only two politicians who dared to stand up and speak differently against the numerous PAP MPs in the 1990s.

She is easily one of the best speakers in the SPP and gets the crowd fired up, moving right into fourth gear. 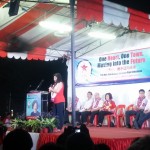 She reminds us that despite not being an elected MP, Mrs Chiam had the second highest speaking rate in Parliament — a stark contrast to some ex-ministers who spoke zero and one times.

“Mrs Chiam is proof that a homemaker can do better than highly paid ex-ministers!”

“Mrs Chiam reminded the government that our taxpayers’ money has to be wisely and carefully spent!”

The crowd are really into it. “In this election, we have seen a wave of mudslinging and name calling.”

“All from the PAP! Gutter politics!” shouts a voice from the crowd.

“But Mrs Chiam has shown that she is above such mudslinging and low politics,” she smiles.

8:15 p.m: Speaking next is Mr Law Kim Hwee, a candidate in the Bishan-Toa Payoh GRC slate. 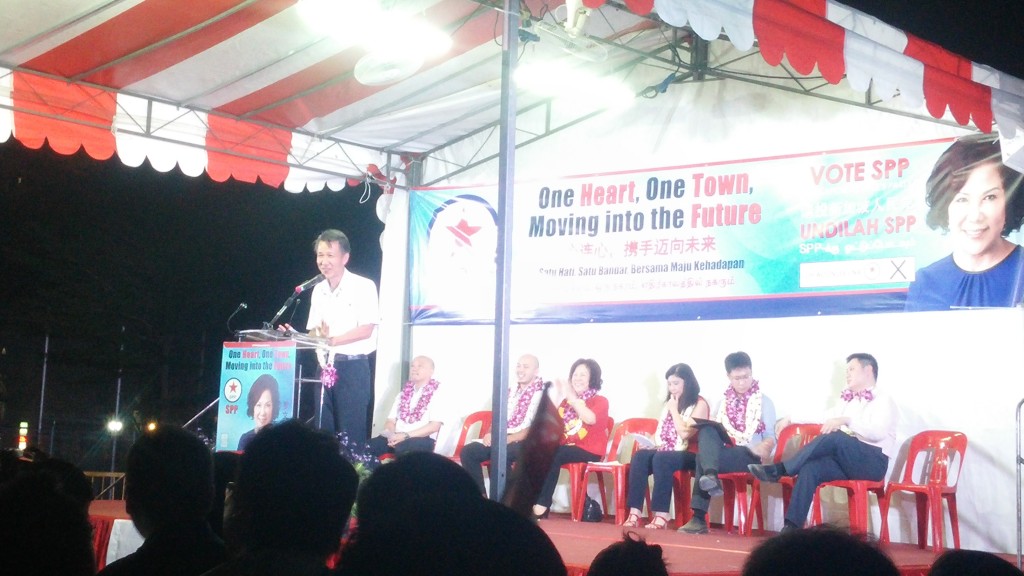 He speaks in Teochew and Hokkien. He has a lot to say, but the general gist is — vote for the SPP, you are the masters of your own future, not the PAP. Look at our brothers in Aljunied who have risen up and told the PAP that they have had enough. He rounds off by encouraging Potong Pasir residents to vote for Lina Chiam.

8:30 p.m: Next is Mr Benjamin Pwee, the leader of the SPP-DPP team contesting Bishan-Toa Payoh. 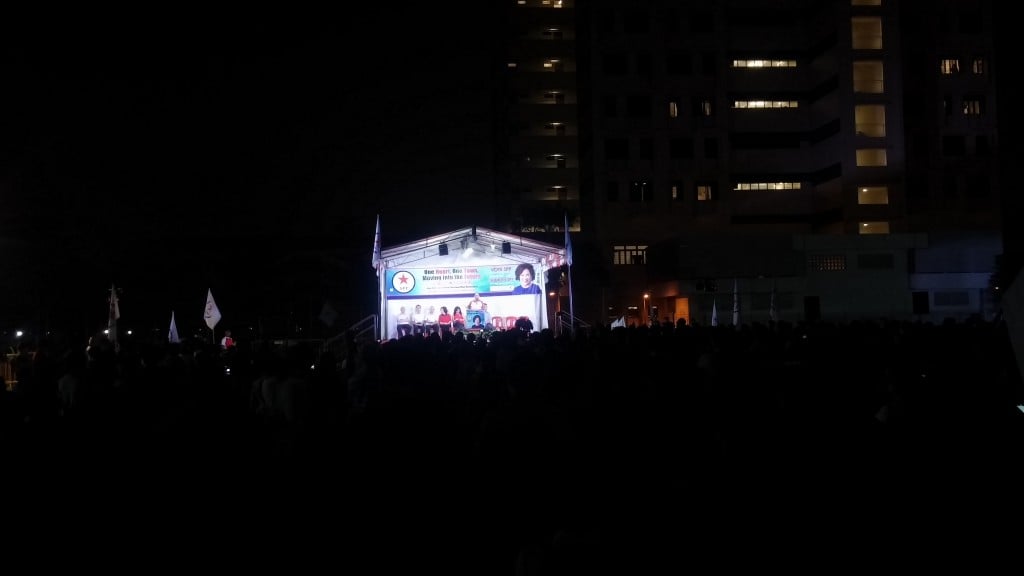 In Mandarin, he reminds us that Mrs Chiam lost Potong Pasir by a marginal 114 votes. He goes on to remind us what Jeanette had said earlier — that Mrs Chiam had one of the highest speaking rates in Parliament — 78 times from 2011 to 2015.

But what of her competitor, Mr Sitoh? “Mr Sitoh spoke up only 39 times — that’s half of Mrs Chiam.”

His diction is not very clear — I keep hearing ‘Potong Pasir’ as ‘Workers’ Party’.

(There was once where he said “many new residents have moved into Workers’ Party” and I was very confused. If you don’t believe me, try saying both phrases yourself quickly.)

He concludes by reminding all at the rally that even though some Potong Pasir residents may be new to the estate, “never forget what Mr Chiam has done for this town for so many years.”

8:45 p.m: Loke Hoe Yeong is next. He is not a candidate in this year’s elections, but he is the author of Mr Chiam’s biography, Let The People Have Him. He speaks about how Potong Pasir is a very special town that said ‘No’ to the government and voted in an opposition MP.

In a little history lesson, he goes back to the 1980s, where the previous MP of Potong Pasir was a man called Howe Yoon Chong. Mr Howe was the man who first suggested that the CPF withdrawal age be raised from 55 to 65 and also that retirement age be raised.

When Mr Howe decided not to stand for elections, the PAP sent in a government scholar to Potong Pasir.

“His name was Mah Bow Tan.”

“BOOOOOOO!” the crowd chants. He goes on to say how the rest is history. 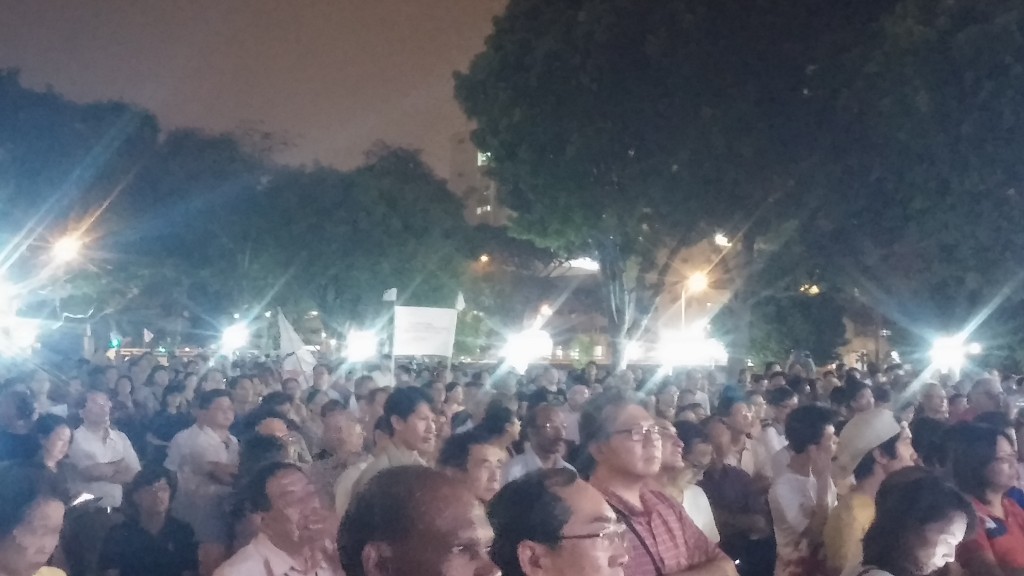 He is helped onto the stage by several SPP members. The crowd is at its loudest.

“Permission to carry on, Sir.” I hear. 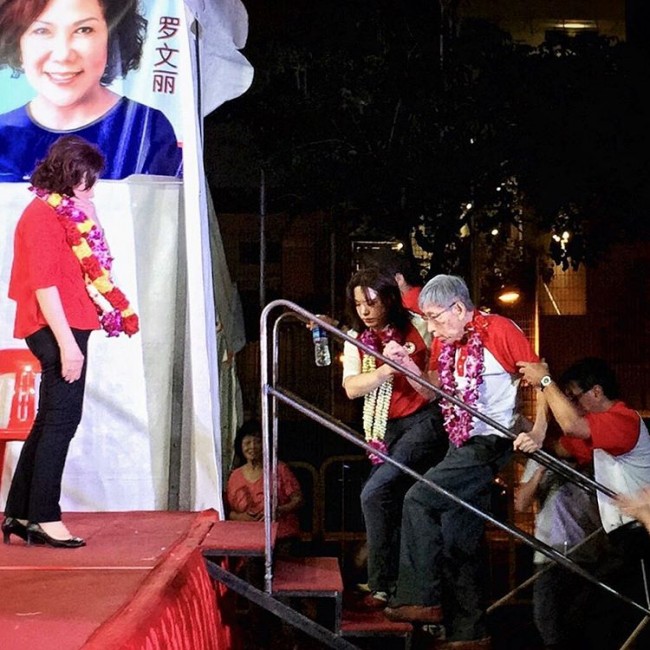 Clearly, Mr Chiam’s legacy has not diminished in the slightest — if anything, it has grown stronger with every year.

Continuing on, Hoe Yeong reminds us that when Potong Pasir residents voted Mr Chiam in, bus services were taken away from them.

Upgrading was taken away from them.

Even the POSB was taken away from them.

“But today, you have all these things. So do not be afraid. Because it is your right to all these services — to all these amenities, as citizens of the Republic of Singapore. Don’t expect any less than the citizens in the PAP constituencies.”

He then comes onto a point which I found very interesting.

“If the PAP win Potong Pasir again, the next election, you could be voting as part of a GRC. A faceless and colourless GRC which changes its name and borders at every election.”

I imagine the thought of being blended into a GRC is frightening to these proud Potong Pasir residents. I hear boos and several whispers about whether it will actually happen.

“You may not even be sure who your MP really is.”

He ends off by saying that Lina Chiam is one of the bravest women he has ever known. “You will not find a braver person to represent you in Parliament.”

“And indeed, you will not find someone as dedicated to this special kampong.” “POTONG PASIR!” the audience shouts.

9:00 p.m: The next speaker is Mr Abdillah Zamzuri, another candidate for Bishan-Toa Payoh. He speaks briefly in Malay. I don’t think there are many in the crowd who speak Malay, but they certainly give him a loud cheer whenever he mentions ‘Lina Chiam’ and ‘Potong Pasir’. 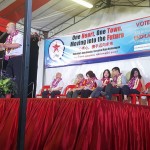 9:10 p.m: Well, the next speaker surprises me. It’s Ms Camilla Chiam — the daughter of the Chiams. As far as I know, this is the first time she’s openly campaigning for her parents.

She told us, in Mandarin, of how she had always followed her parents around Potong Pasir as a younger woman and how Potong Pasir had always impressed her with its “kampung spirit”.

She also reminded us of how often her mother had spoken up in Parliament and that her father and his Potong Pasir town council had built several lifts without asking the residents for co-payment and without much funding from the PAP.

For a first-time speaker, her speech was impressive and heartwarming. But what can we say — it’s in her blood.

9.20 p.m: The next speaker is Lina Chiam herself, gunning to take back Potong Pasir. 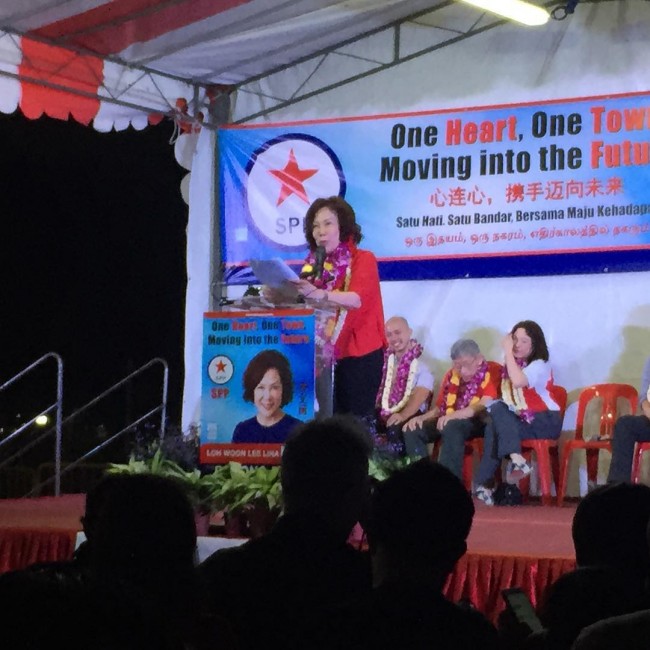 I remember her from 2011. She was not such a good speaker then, and was not very good at working the crowd. She has improved in many areas — her experience in Parliament has certainly helped.

She speaks of her history with Potong Pasir. It is really quite moving.

“When Mr Chiam first entered Parliament, I was much younger. I was 26 years old.”

“I have given more than half my life to politics. You know why? I love politics! I love to serve the people!” The crowd applauds gamely.

“We have spent more than half of our life in Potong Pasir. I think our footprints have been imprinted on the ground!”

“I saw many of the young voters grow up. And today, some of them are our assentors and voters!” She went on to outline what she could do as an elected Member of Parliament and what she would continue to do for the Potong Pasir residents, ending off by reciting the lyrics to Ronan Keating’s “When You Say Nothing At All.”

That’s gotta be a first. 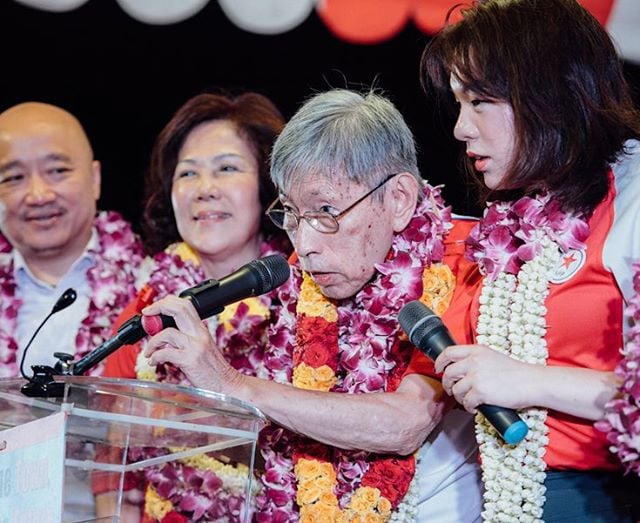 His speech is a bit slurred, but with his daughter beside him restating everything clearly into the microphone, the audience manages to catch everything he says, or wants to say.

“You know why I support Lina? She is courageous.”

But his last few sentences are clear, and everyone catches them:

“Thank you all for coming.”

“Thank you and goodnight.” he manages.

That is the end. Mr Benjamin Pwee leads the crowd in reciting the pledge. Chiam manages another “thank you, everyone”, to send everyone home happy.

“Um, have a nice trip home. Hope the MRT doesn’t break down,” jokes the emcee.

This was no blockbuster rally like the Workers’ Party or the PAP are used to having. It was fittingly, a small rally — small and homely, just like the town of Potong Pasir. There were no big promises made about forming the next government or gaining a mandate for the future.

This was just about the town of Potong Pasir and voting for someone who would speak up for them and be, to quote Jeanette Chong-Aruldoss, their ‘fearless fighter in Parliament’.

It’s perhaps fitting that what I noticed at tonight’s rally were the same attitude and spirit that Mr Chiam built his legacy on — the courage to fight against insurmountable odds.

The SPP is not a big party — they are one of the smallest parties at this year’s elections, contesting just 1 GRC and 3 SMCs. But they sure are a plucky and stubborn bunch.

Mr Sitoh, are you watching? Because you’ll have your work cut out for you this year.

All other images via MustShareNews.