You watch them on the big screens – they act, they sing, they dance, but they can also stuff your face with food (well, not literally). Celebrities are often no strangers to restauranteering – after all, star power lowers the barrier to entry.

Good food + fame? Sure sounds like a winning formula.

Over the years, the bandwagon of celebrities dabbling in the F&B industry has increased. These local celebrities inspire us in more than one way – as if hectic work schedules don’t exhaust them, they have the ability to wear two hats (or more!).

Here are 10 celebrities and their successful F&B business ventures: 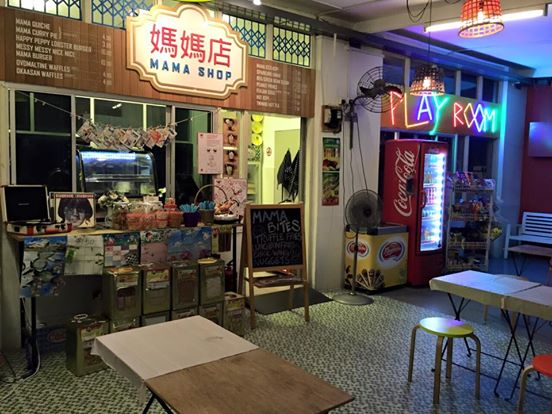 The retro-themed café boasts the façade of a mama shop and quickly gained the attention of the media and the public. The Mama Shop opened last year in October to a 200-strong crowd, thanks to the popularity of Chin and Ma. Together with two other partners who are not in showbiz, the four invested a low five-figure amount to start the business.

If you were wondering how the name of the cafe came about, Chin said in an interview with The Straits Times SoShiok: “We feel that it’s a catchy name that can evoke happy childhood memories.”

At the café, you can indulge in local delights like otah roll, or take your pick from the burgers, waffles, and old school drinks the café offers. Prices range from $3.90 to $14.90.

Highlight: Be a kid for a day and take a trip down memory lane as you immerse yourself in a game of Snake and Ladders, Old Maid, and Donkey cards. 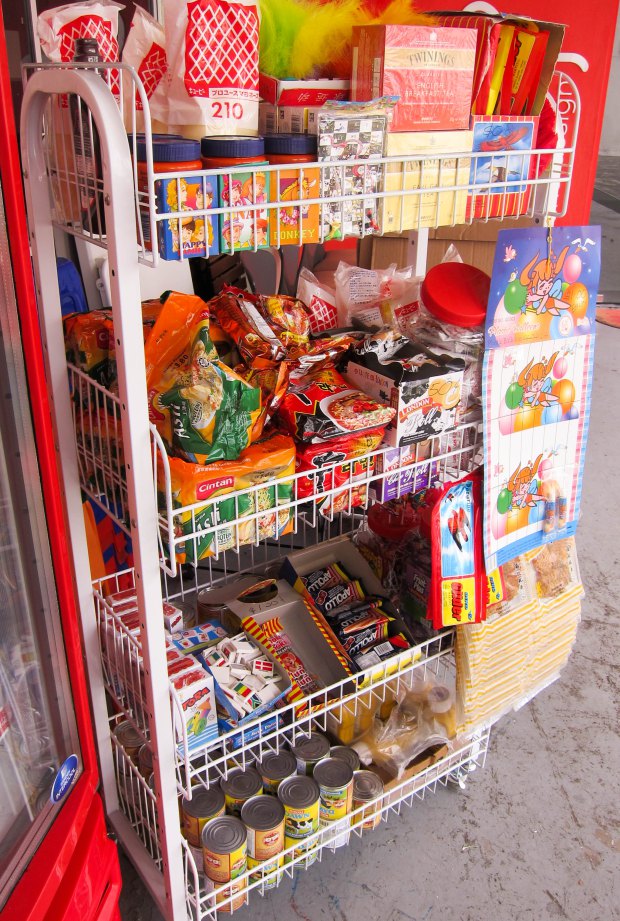 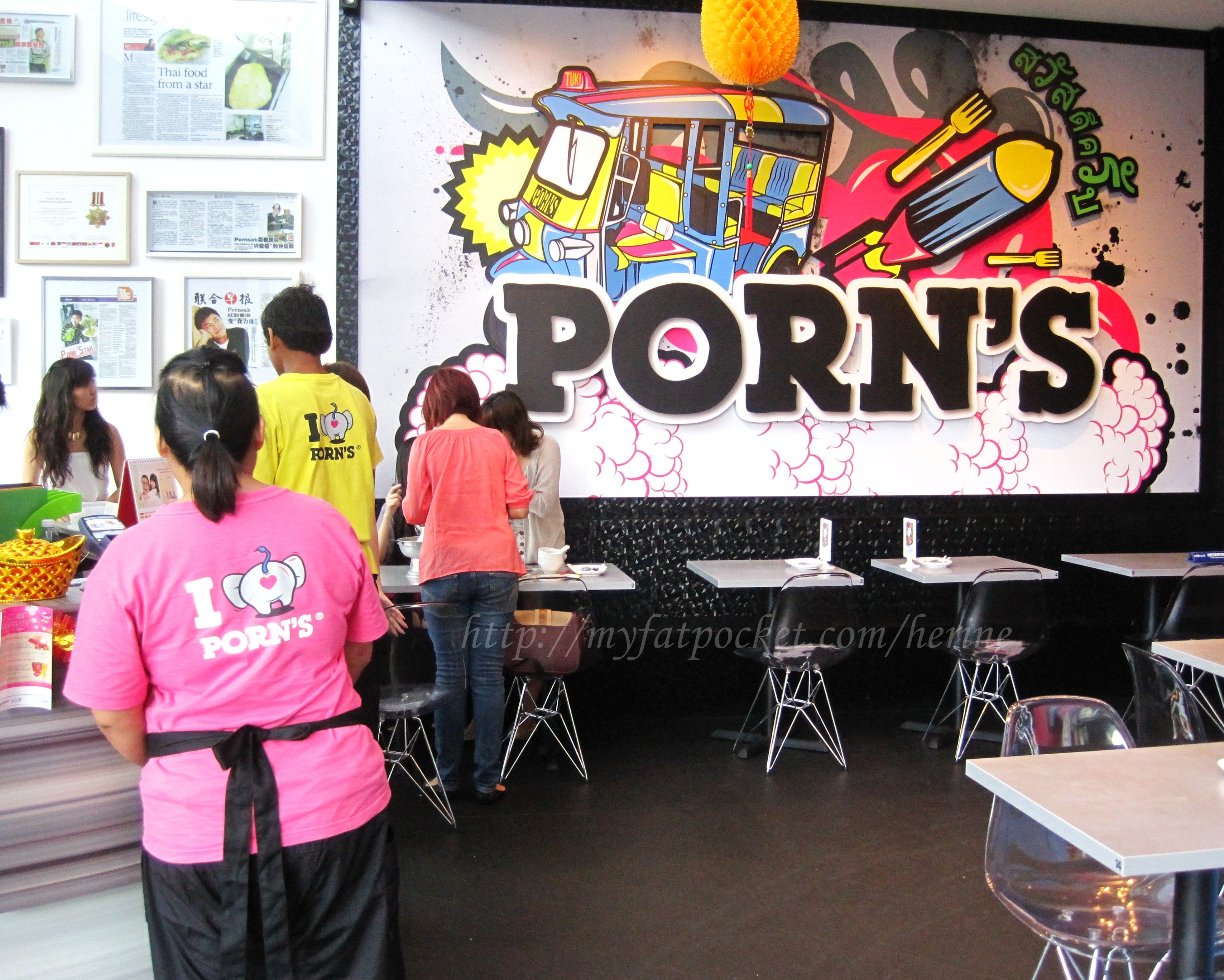 With the first Porn’s outlet opened in 2010, the successful Thai food restaurant has spawned three other outlets since. But was it all a bed of roses?

Pornsak said in an interview with AsiaOne: “Being a celebrity saved the business when we opened. It could get the attention of the media and public. But you also have to be very hands-on.”

Indeed, simply using the fame card is not enough. He shared that the business was on the verge of bankruptcy after its Star Vista outlet, and he turned to government grants, such as a Workforce Development Agency training grant.

If you do get lucky to meet the bubbly artiste, don’t hesitate to approach him for a picture. Chances are, he’ll be more than happy to oblige! 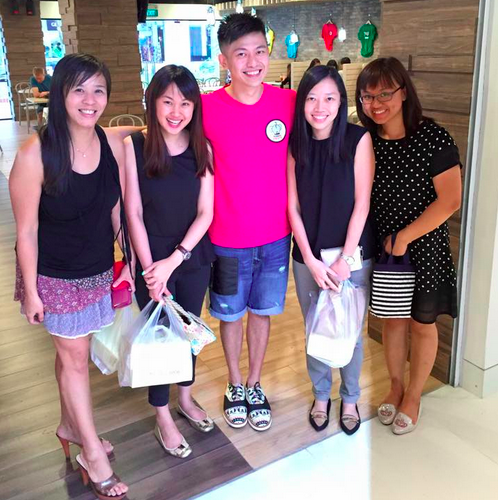 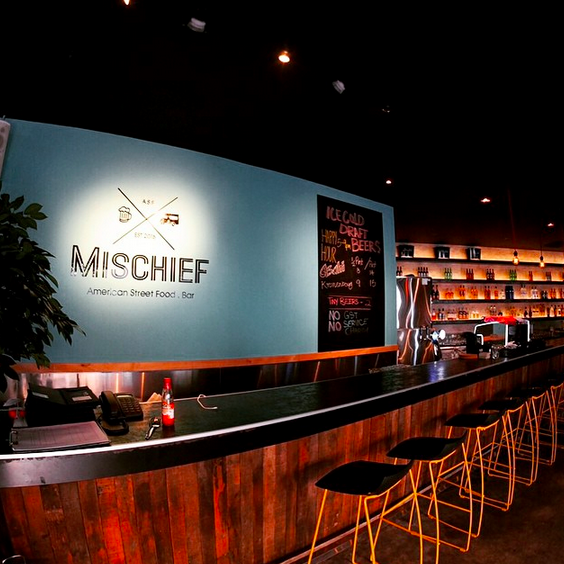 Actress. Director. Host. Comedian. As if these titles weren’t enough to keep Michelle Chong busy, she now has the title of Restaurant Owner under her belt. Given Michelle and good friend actress Cynthia Koh’s shared love for food, it was only a matter of time they ventured into the food and beverage business.

In an interview with TODAYonline, Chong said: “Cynthia has been everywhere, she’s eaten all sorts of cuisine. For me, you know I love to eat, I am such a foodie. We love food, we’re passionate about food and we think this is a good idea.”

The restaurant and bar serves American Street Food, so expect to find quesadillas, hot dogs and tacos with an Asian twist. The best thing? There will be no GST or service charge.

Chong said she value-adds by “occasionally sitting sexily at the bar” in her The Noose Lulu wig and costume, so go try your luck if you love the KTV hostess. Lulu will surely be wely happy! 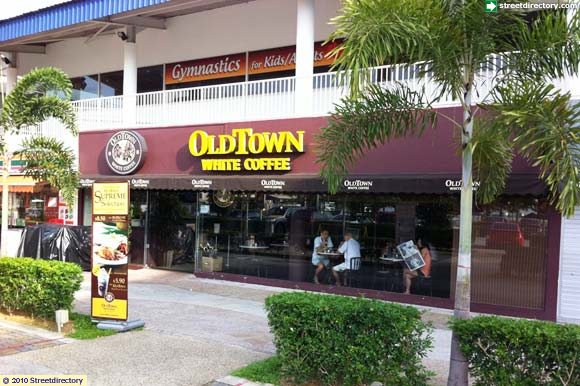 Where: A full list of locations is available here.

Funnyman Mark Lee may be more well-known as a comedian, but he has his serious side when it comes to business.

In 2008, Lee, together with Jack Neo, brought the Malaysian chain to Singapore. They invested $300,000 in their first East Coast Park outlet and today, there are 13 outlets islandwide. Nonetheless, the business was not all smooth sailing – Lee considers the Toa Payoh Central outlet his worst investment, as they invested $300,000 but lost $20,000 in three years due to the less-than-ideal location.

The outlet has since been relocated to JCube.

Highlight: The interior of OldTown is unpretentious and laid-back, with an old-meets-new feel to it. If you appreciate coffee and chill vibes, here’s the place to be. 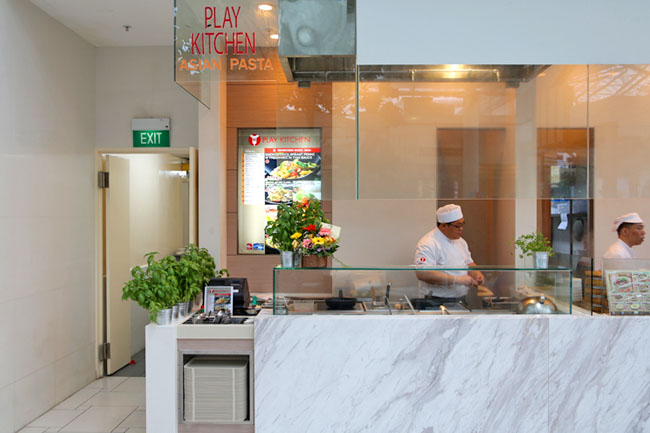 Yeo’s love for food started since young and his childhood ambition was to be a chef. Although his dream was not fulfilled, the culinary arts graduate from the Singapore Hotel and Tourism Education Centre is no stranger to food, having hosted a range of local TV food programmes like Food Mania, My Yummy Lunchbox, I Cook For You and more.

It comes as little surprise that the artiste eventually tried his hand at F&B, leading to the inception of Play Kitchen, a stall that sells pasta. The adventurous Yeo even created a dish called Hei-bee Clams Spaghetti. Where: Find out more here.

Tenderfresh is a name many Singaporeans grew up with and is synonymous with crispy, fresh and juicy fried chicken. In its heyday, Tenderfresh could be found in most coffeeshops. Yeo plans to revive the brand with signature fried chicken and value-adding with more food options by offering paella rice meals and pasta from Play Kitchen.

Highlight: Be prepared to be spoilt for choices with their extensive menu! There is also no GST and service charge.

6. Jack and Rai – The Flying Squirrel 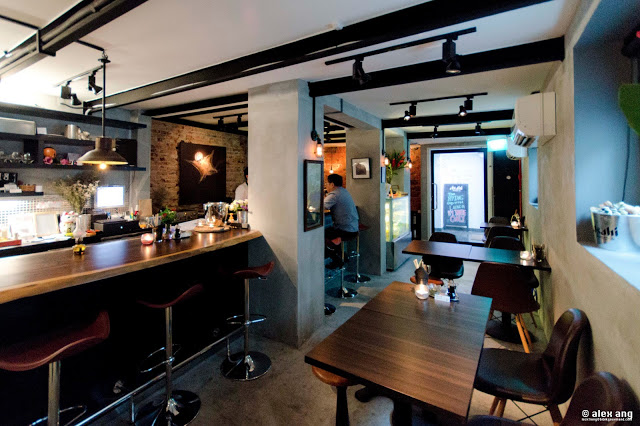 Their Japanese bar, named The Flying Squirrel, is tucked away in the alley of 92 Amoy Street.

There lies a story behind the interesting name of the restaurant – the duo, together with Jack’s wife, visited a flea market in Melbourne and acquired their Australian animal zodiac there. The zodiac that Ho’s wife got was the sugar glider, which inspired the trio to name the restaurant The Flying Squirrel, for its resemblance to the Australian native animal.

Highlight: Seek refuge from the hustle and bustle of the main CBD area. 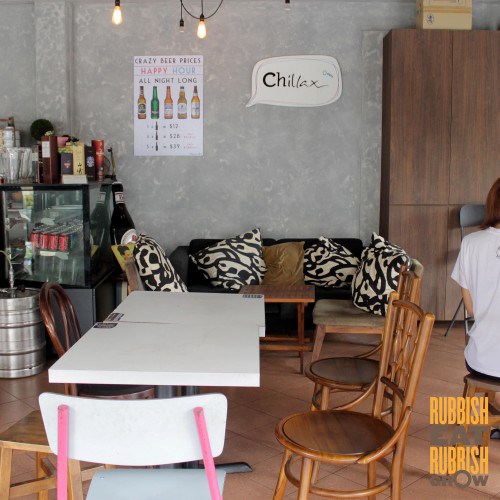 Wee’s love for massages, coupled with his fiancee’s liking for coffee and a book at a nearby café, Chillax Café was eventually conceived. Chillax Café is an aptly named café where customers can indeed chillax at – in fact, it used to offer massage services but is no longer available. The café offers all-day brunch, smoothies, mains and craft beers. 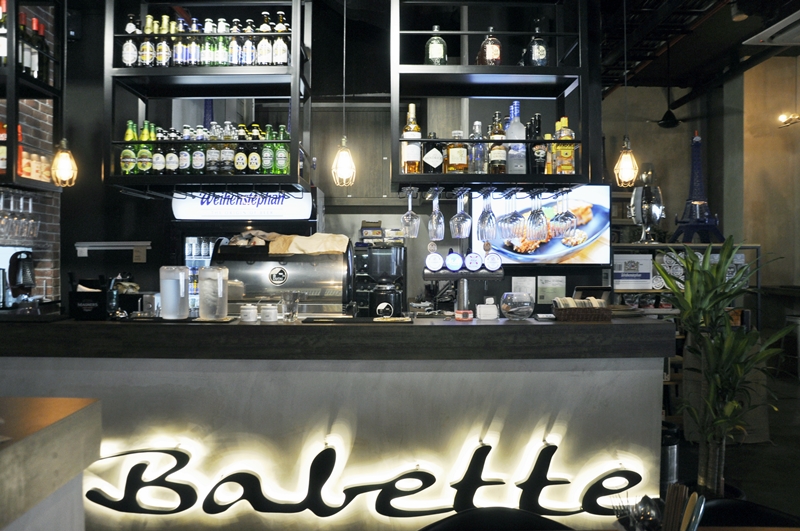 Wee’s second F&B venture is a French-Japanese eatery named Babette, derived from ‘Babette’s Feast’, a 1980s Danish film about how a good chef can transform a dinner into a love affair. Wee aims to cater the same experience for diners.

Highlight: Expect excellent music in the background while you dine– the towkay is after all a former 98.7FM deejay. 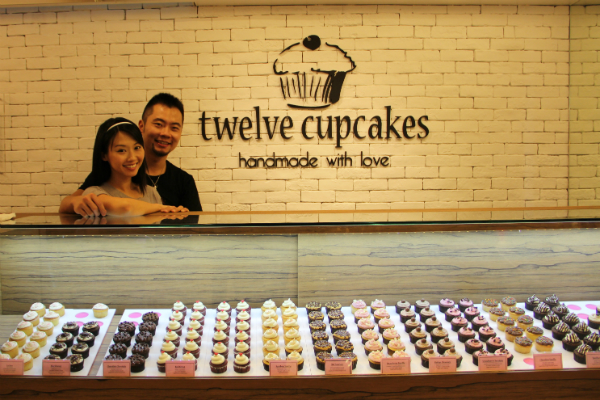 Where: Find the locations here.

Founded in 2011 by Daniel Ong and Jamie Teo, Twelve Cupcakes has since grown and currently has 15 stores in Singapore and a total of 41 in 6 countries. If you like their cupcakes, you might be surprised to know that Teo created the recipes of all the cupcakes sold, which were less sweet to catered to Asian palates. Prior to opening Twelve Cupcakes, Teo has been baking for five years and revised her cupcake recipes. Ong also had a crash course in baking to help out in the store. 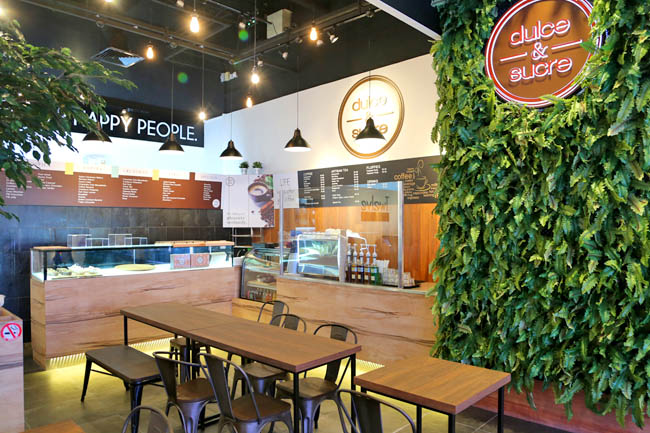 Highlight: You can have your cake and eat it! 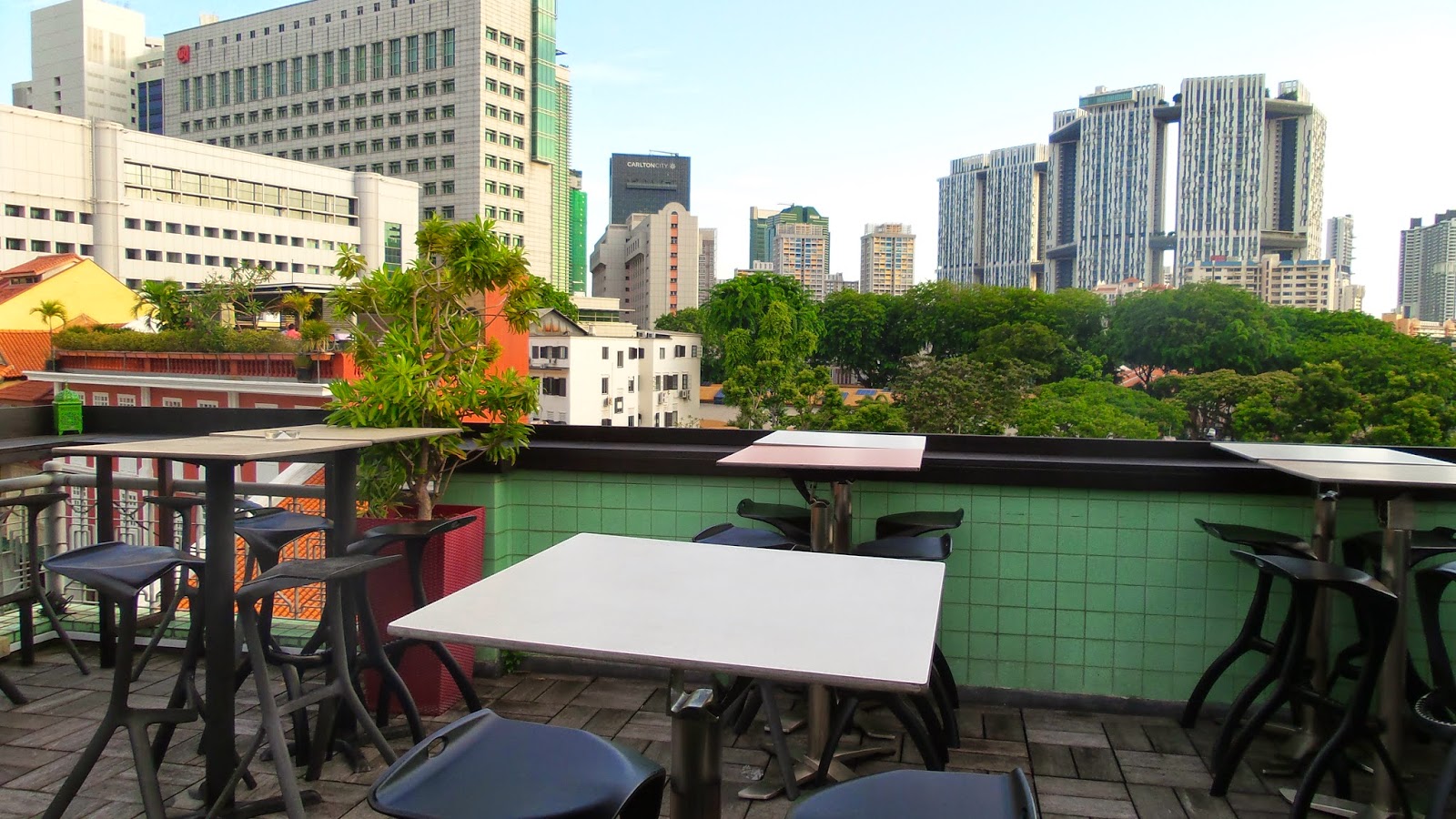 Owned by: Irene Ang
Where: 96B Club Street, 4th Floor

Many best remember Ang as a comedian, but beneath that facade lies a diligent woman with a drive to succeed. Coupled with a love for food, Ang started FRY Bistro Bar in 2012. Explaining the concept behind the bistro, Ang said she wanted it to be a cosy hangout for people to indulge in music, food and conversations. Their signature dishes include truffle fries and Aunty Ang’s Chicken Wings, created by Ang’s mother.

Highlight: Opt for al fresco dining at the rooftop and take in the scenic view. FRY Bistro shares the same space as FLY Academy, so expect to rub shoulders with some celebrities as they head to the bistro after class to unwind. 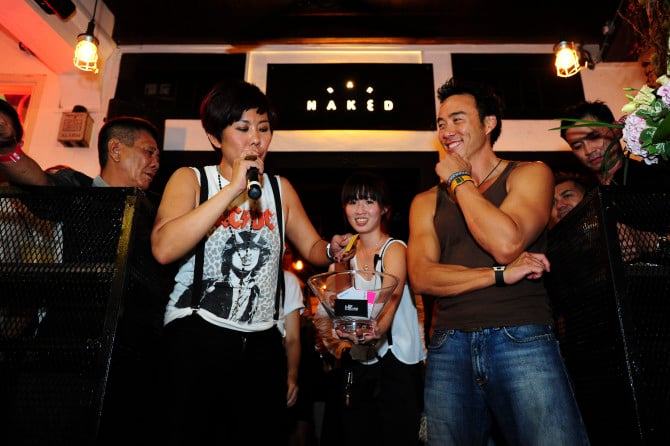 Highlight: Expect food with quality. Ang felt that the truffle fries FRY Bistro offered was not shiok enough and asked the chef to add in more truffle oil, despite how costly truffle oil is.

Actor Adam Chen has already been in the F&B industry for seven years – not because he’s a foodie but because of his passion to create spaces. Now, he and his business partners own Park café at Holland Village, bar chain Five, Ikki Izakaya at Buona Vista, and Golden Bistro at Projector cinema in Golden Mile Tower. This achievement is not without setbacks – his first F&B endeavour, Japanese burger joint R Burger closed in 2013 after four years of operations. 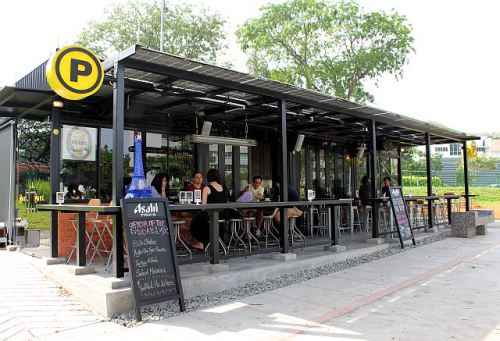 Located conspicuously at the junction between Holland Avenue and Holland Road, Park is a cafe by day and bistro by night. Pastas, sandwiches, mains, burgers and sides are offered here.

Highlight: If you appreciate spaces and good food, head down to one of Chen’s bistro.

Fame does not always guarantee success of the celebrities’ F&B businesses. Sure, the fame helps pave the way – getting publicity from the media, word-of-mouth advertising by fans and having a network of connections.

What we don’t know though, is the failures they’ve been through to get to where they are today. There’s no foolproof method of attaining success – it often comes only after hard work, trials and tribulations.

Would you show your support for these celebrities?