Must Share News – Independent News For Singaporeans
Home News Singapore Navy Names Base After A Ship So Navy Boys Can Fulfill... New Name For Old Base

In the grand old Singapore tradition of creating “interesting” new names for places, the Republic of Singapore Navy (RSN) has decided it’s their turn. They will be renaming Changi Naval Base — sort of.

Rather, they are adding to its name — the base will now be called “RSS Singapura – Changi Naval Base”, to mark the navy’s 50th anniversary.

A bit of a mouthful, don’t you think? For those who aren’t familiar with naval terminology, RSS stands for Republic of Singapore Ship.

The RSS Singapura was one of the navy’s first ships. It was one of three ships which the then SNVF (Singapore Naval Volunteer Force) had when it was founded on May 5, 1967.

Dr Collin Koh, a research fellow at the S. Rajaratnam School of International Studies’ maritime security programme, told The Straits Times that the name “RSS Singapura – Changi Naval Base” will serve as a reminder of the RSN’s history and build esprit de corps.

On The Straits Times’ Facebook page, some netizens didn’t take well to the new name. Their main peeve — why are they calling a naval base a ship, when it’s not a ship?

We think it’s to boost the morale of our navy boys — instead of saying they’re going to Changi Naval Base, isn’t it more interesting to say that they going onto what sounds a ship?

Better still, they can play out their Titanic fantasies safely on land. 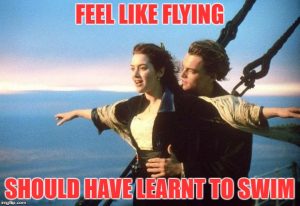 Though we wonder why the RSN didn’t commit on their name — if you want to change, go all the way and name it “RSS Singapura”. Why leave leave “Changi Naval Base” in the name?

Perhaps they realise that people will be confused with this whole “calling a base a ship” thing.

Jokes aside, it’s worth noting that the names of Naval shore establishments inspired by its ships is an existing British Royal Navy tradition, and has been for a long time.

Dr Koh told The Straits Times: “Naming a shore-based installation after a ship is not unique, and is practised by other navies.”

Singapore’s Sembawang Navy Base was known as HMS Terror from 1945 – 1971 in honor of the ship. The Malaysian Navy and United Kingdom Navy named its bases based on their ships too.

The name change will take effect from May 15.