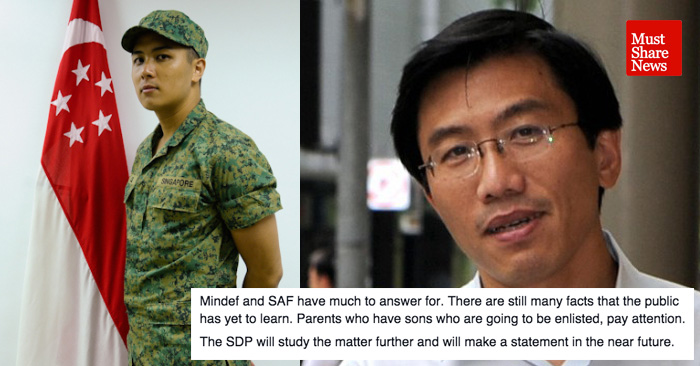 Singapore Democratic Party (SDP) chief Chee Soon Juan has met up with the mother of the late NSF Dominique Sarron Lee who died from an allergic reaction to smoke grenades during a training exercise in 2012.

After his death, his parents sued the Singapore Armed Forces (SAF) and the two senior officers who were with him for negligence. The case was rejected because of the Government Proceedings Act, which gives the government and the army immunity against negligence suits.

Chee wants to make MINDEF and SAF answerable to the tragedy, according to the Facebook post. He added that SDP will study the matter further and will make a statement in the near future.

Others have similarly stepped up to voice their disapproval at the court rejection. A fundraising campaign was started to help the family pay for legal fees after it was revealed that they have to cover the legal costs for all three defendants amounting to about $22,000.