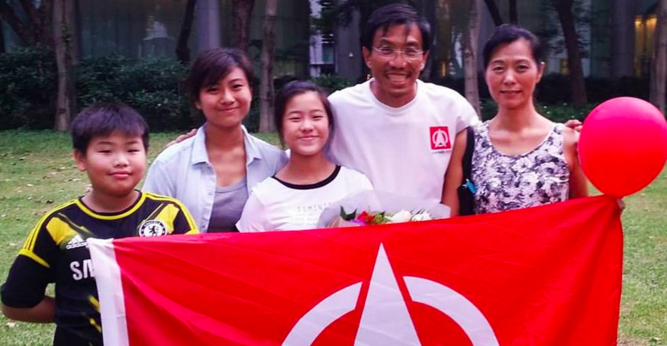 CSJ has successfully walked the walk

Singapore Democratic Party (SDP) head honcho Chee Soon Juan embarked on a 4-day walk around Singapore, in an attempt to raise funds for their work.

Starting from last Thursday (12 Nov), Chee had successfully completed his walk yesterday (15 Nov). We stalk his journey to see what he’s been up to:

If you were wondering what’s inside that duffel bag, now you know.

Not forgetting to get some media coverage:

Starting from the West side of Singapore, CSJ made his first pitstop at Ghim Moh Temporary Food Market.

Chee then chatted with a supporter who came to find him:

His right knee injury soon acted up, and had to take another break. SDP’s candidate Jaslyn Go also made a cameo appearance.

Chee ended his first night in the Petir area, and was met by his wife and supporters.

It later rained, but Dr Chee pressed on without an umbrella. Looks like nobody reminded him that it was the monsoon season.

CSJ was starting to look tired and deflated, with aches and his knee problems plaguing him.

But of course he didn’t throw in the towel. At his last rest point of the day, Chee’s wife was waiting for him again. A visibly exhausted Chee still manages to smile for the camera, albeit not his usual wide cheshire smile.

Starting his day at 6.15am, Chee headed to Sengkang Sports Complex’s McDonalds, where he met with some supporters.

By midday, the fatigue had set in as Chee trudged towards Tampines Mall.

Chee’s willpower was significantly weakened by the pain he was in, but after a quick water break, he continued his walk to Bedok Central.

Along the way, Chee met a number of supporters. Some had been stalking SDP’s Facebook page to track Chee’s whereabouts, like this supporter who rushed out for a picture with Chee.

Of course, he obliged but stole a little shuteye in between.

To end off day 3, Dr Paul Tambyah came in place of his wife but that’s okay because…

… the loving couple kickstarted the day with a romantic walk by the beach and caught the sunrise before Chee embarked on his final lap.

About three hours into the day, Chee was already on the verge of breaking down.

Later, a supporter’s car slowed down as they drove past Chee, and a woman waved at him. Not sure if Chee was returning the wave or trying to flag down the car to hitch a ride (just kidding).

Chee persevered, and paid his respects to the victims of the Paris terrorist attacks when he was outside the French Embassy.

He eventually reached the finishing point, and was greeted with supporters…

… and his wife, of course. #dedication

To thank his supporters, Chee delivered a concluding speech.

“If my feet could cheer right now, you will hear the Hong Lim Park roar”.

Not the first #walkthetalk

In fact, this isn’t the first time he’s been walking the walk. In 2007, Chee went on a 3-day journey on foot around Singapore too:

We’re not sure about the route taken, but he probably had to take an extra day to finish the walk now that he’s eight years older.

Nonetheless, the effort is commendable for a 53-year-old. Some of us wouldn’t even walk five minutes to a nearby bus stop, especially with the prevalence of cab booking apps like Uber.