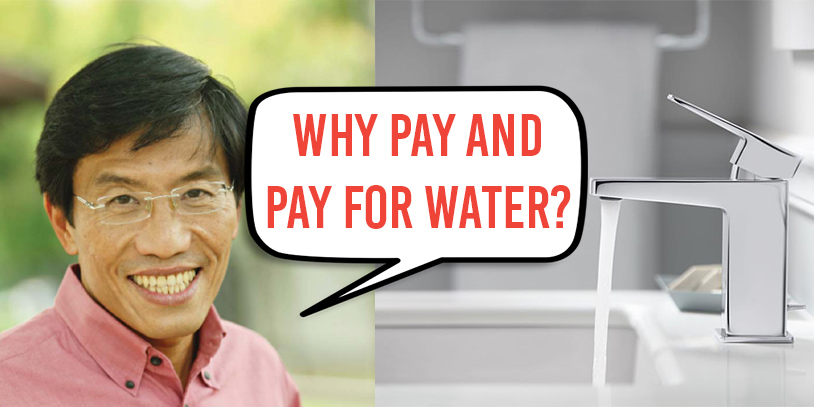 Our water is getting more expensive, and Dr Chee Soon Juan isn’t happy about it — he says the reasons given for this hike aren’t enough, and we’re already paying three layers of taxes on the water we use.

In one of the more-talked about moves of Budget 2017, revealed in a speech made on Monday (Feb 20) by Finance Minister Heng Swee Keat, Singaporeans will see a 30% hike in water taxes from July 1.

See this video for what Mr Heng said:

In a nutshell, Mr Heng asserted that increases in water prices were necessary as water was a matter of national survival. He justified the increase by citing the high costs of laying pipes deeper in the ground due to our increasingly urbanised environment and the higher costs of desalination and Newater production.

2 existing water fees will be combined into 1 volume-based fee, which is a better reflection of water usage, and hence makes paying for water supposedly a fairer process.

Here’s what households will have to pay:

Following the Budget speech, Dr Chee posted a message on the SDP’s website, saying that Mr Heng’s brief justification for the increase in water prices were not adequate, and claiming he didn’t provide concrete facts and figures on exactly how the government needs more money to provide us with water.

Dr Chee further went on to point out that Singaporeans were already subjected to 3 layers of water tax, and accused Mr Heng of not addressing them during his speech.

These are the 3 layers, according to Dr Chee:

He also claimed that the government was “clearly taking advantage of Singaporeans by collecting more tax revenue”, amid the economic slowdown.

Many were frustrated over the hike in prices and accused the authorities of a lack of transparency over it:

Other netizens ironically used dry humour to express their displeasure over a wet issue, even giving suggestions on how to conserve water:

And then, in true Singaporean style, there were netizens who pushed the blame to…yes you guessed it right– foreigners.

Whether or not you think the water price hike is justified or not, I’m sure you would rather not pay more for your water.

While we do agree that water is precious and we need to do all that we can to ensure clean water for Singapore for generations to come, we would also like to know that our extra money is being put to good use.

Paying more for essentials without knowing why is simply not what we expected from this year’s Budget.

Read our story on what Singaporeans want from Budget 2017.