Must Share News – Independent News For Singaporeans
Home News Ode To Sin Ming’s Now-Dead Chickens, Put Down In The Year Of... The Year of The Rooster has just started, but it doesn’t seem like their year for a group of chickens in Sin Ming Avenue, who were killed for no good reason other than that they were bothering us.

The good folks at the Agri-Food & Veterinary Authority of Singapore (AVA) told Today that they have put down a group of chickens and roosters that have been roaming around Sin Ming Avenue, based on residents’ complaints. Apparently they’re not afraid of bad luck for the Chinese New Year.

So what did the residents complain about? Noise – whatever noise a chicken can make that can be louder than their TV sets.

I have lived in the area for more than 21 years, and I remembered the chickens well. I occasionally saw them while walking home from the bus stop. Mostly, I just saw a lone rooster, surveying his “territory”.

But it was quaint to see them sometimes in groups, pecking away at their food – it made me feel like I was in a rustic kampung amid a modern metropolis. Once, I saw a boy feeding them. It heartened me that there were people who took the time to feed the animals despite living in a fast-paced city. For me, the chickens were emblematic of a slower pace of life.

My mother was also fond of the chickens. She has always liked animals, but perhaps they also reminded her of days of yore, when there were kampungs in Singapore and people used to rear livestock.

Unfortunately, there weren’t enough people who relish the slower pace of life, as the chickens were ultimately done in by Singapore’s relentless pace of development.

The chickens used to have a wide open field to live in, namely the one that used to be opposite Block 454, Sin Ming Avenue. 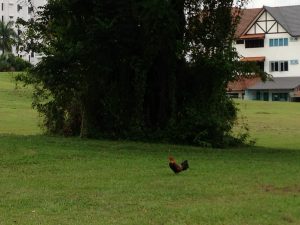 Unfortunately, in 2015 their home was taken away from due to the construction of Thomson Impressions, yet another condominium — you know, those money-making ventures that seem to take up every available space of land that isn’t already devoted to office/retail projects.

Here’s a photo of the lush field before and after it was taken over by construction: 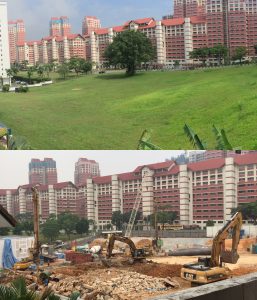 Faced with no other place to roam, the chickens didn’t have any other choice but to move other the grass verge underneath Blocks 452 to 454, and the Thomson View Condominium.

It was a much smaller space, but it was still suitable for their needs, and they lived harmoniously – until now.

In one fell swoop, AVA has wiped the family out after years of living harmoniously in the area. The government agency reacted swiftly, based on just 20 complaints from residents like 63-year-old Ms Stella Hosoucheng.

“The noise and they fly! I can hear them crowing early in the morning … and obviously I don’t like them,” Today quoted Ms Hosoucheng, who works in customer service, as saying.

One wonders how Ms Hosoucheng treats her difficult customers if she can dislike chickens who have done her no harm. And if she eliminates everything she doesn’t like, or if she does it only to the chickens.

Another 71-year-old resident, who not surprisingly did not want to be identified, told Today: “Early in the morning, (they are) crowing, sometimes in the afternoon … I think they should be removed, because they disturb the environment. Sometimes, in the evening, they keep on crowing, making a nuisance (of themselves).”

But… the chickens are part of the environment! And surely they don’t disturb the environment as much as humans do? For an example, read our story on inconsiderate dumping in Clementi. 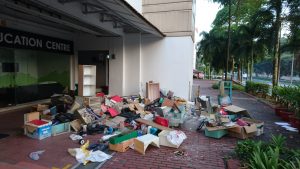 Poor chickens — we never really gave them a chance.

In this new year, we hope that Singaporeans can be more tolerant – of animals, of other people, of things that do not agree with them for whatever reason.

And let’s decide not to complain and get rid of things simply because we do not like them.