Must Share News – Independent News For Singaporeans
Home Lifestyle Blast From The Past: 10 Games From Your 90’s Childhood 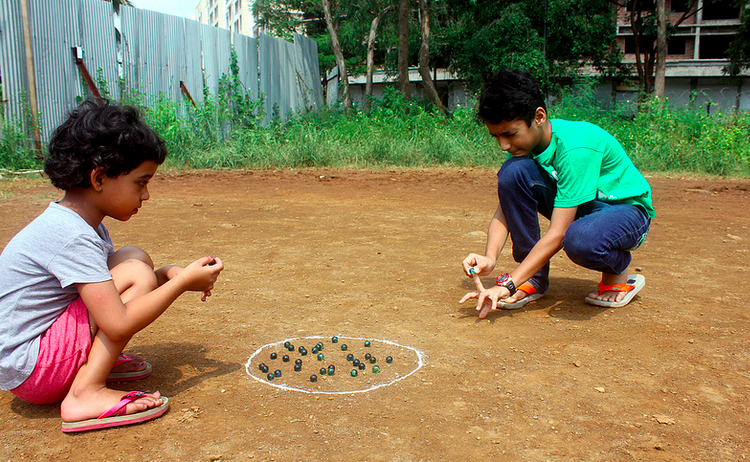 How many of these do you remember?

Before the advent of smartphones and electronic games, we had the best games that were affordable with hours of guaranteed fun. People communicated more physically rather than just over hostile texts. Playing games usually meant challenging your opponents face-to-face, as opposed to hiding behind a computer screen now. As a 90s kid, here are 10 games that I fondly remember: 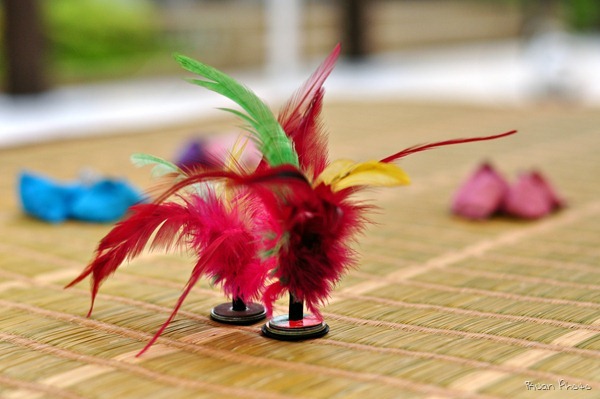 Different variations to this include chaptek, chapteh, chatek. It is a feathered shuttercock – I liked to pretend it was a feather duster and ‘dust’ my face with it. Only because I’m not agile enough to play this game 🙁

How to play: The game requires ridiculous amounts of balance and dexterity – one has to kick the chaptek with the heel of the foot and keep it in the air for as long as possible. One catch though – no hands allowed! 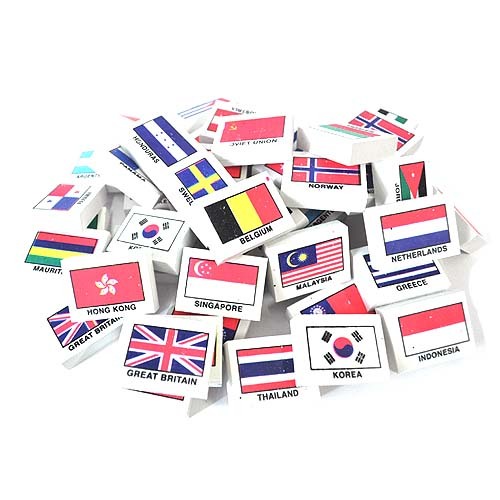 When the recess bell goes off, the first thing you do is not to head to the canteen. Duh. You wouldn’t want to risk having your favourite country eraser (only 10 cents!) to be sold out – you make a beeline for the bookshop, but there is already a meandering queue. Students pushing and shoving to buy erasers, notebooks, stationery… everything but books.

How to play: Take turns to flip your eraser with a finger (usually the thumb), having one go at a time. If the eraser piles on top of the opponent’s, you win and get to keep the eraser. I also like to staple it up in the shape of a belly button and pretend it’s a spinning top. ‘Cos it’s cheaper and more easily available that way. Tiny, translucent plastics that came in various forms – animals, fruits, flowers and even insects (yucks). Its kaleidoscope of colours never fail to entice kids to buy. It’s also the more glamourous way of playing the game instead of using erasers.

How to play: Like the country flag eraser, two opposing players take turns to toss the plastic on top of their opponent’s. The winner gets to keep the plastic tokens. 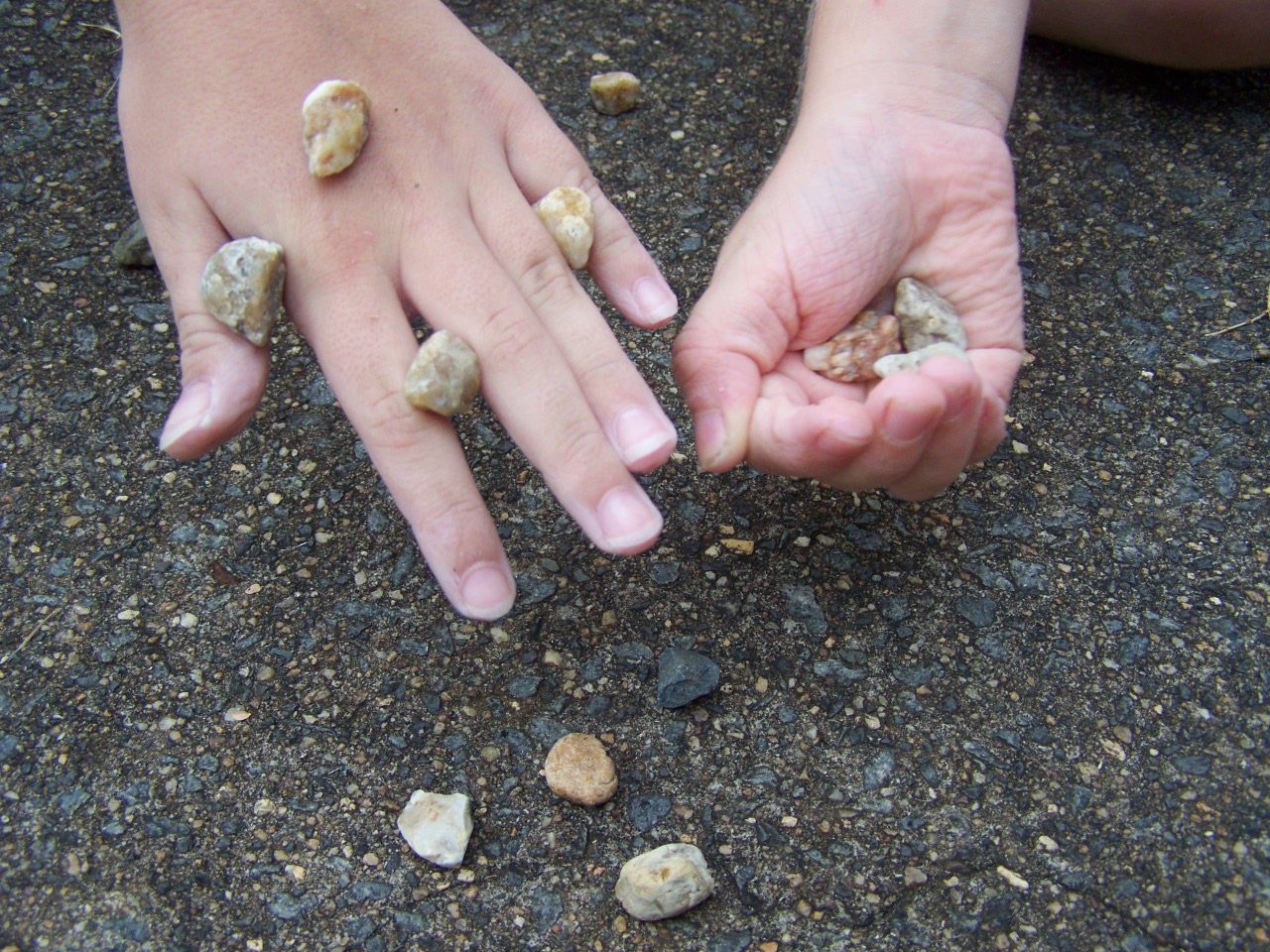 It eventually evolved into 5 small triangular cloth bags filled with beans. I remember buying different sets of five stones because I was fascinated by the variety of fabrics it came in. Do not belittle these stones – its difficulty level can keep one preoccupied for hours! 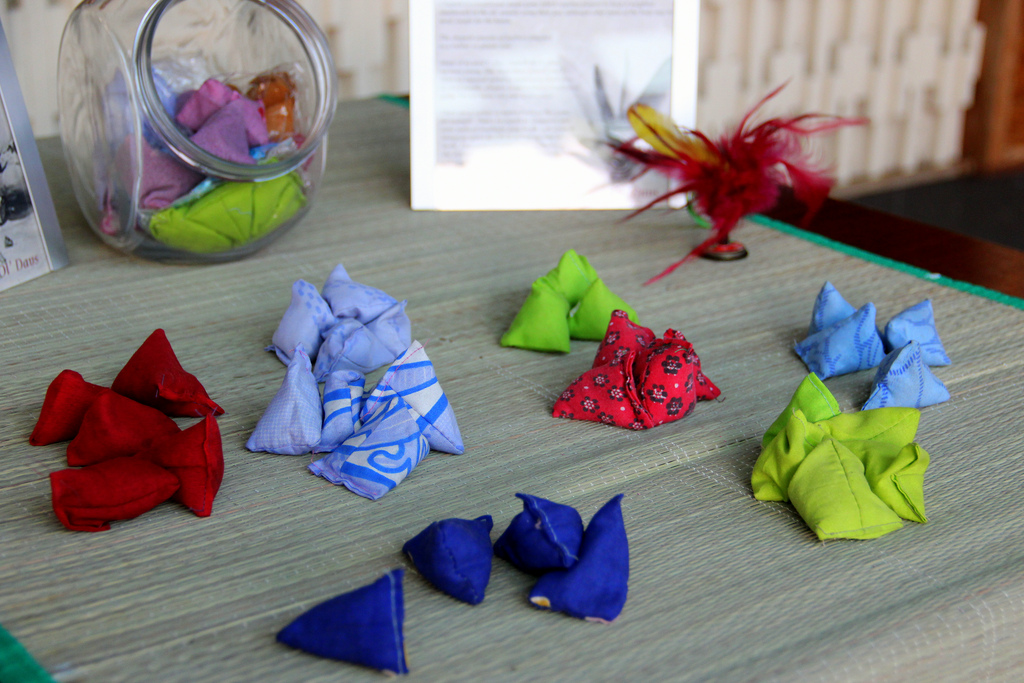 How to play: Toss all five stones on a surface. Then, throw one in the air, pick up another and catch both before they land on the ground. Do this for every other stone. Repeat the process, but with two stones this time round. Repeat again by throwing more stones and catching them. Detailed gameplay can be found here. 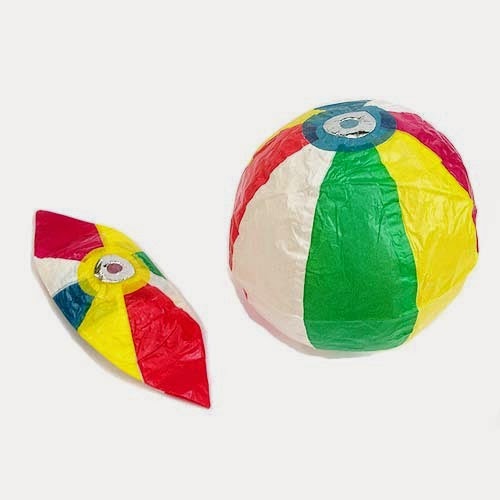 Blow into the silver part of the ball and gape in amazement as it inflates. Possibly the most fascinating part is how well-behaved the air is, staying inside the ball for way too long.

How to play: Endless possibilities and no fixed rules – use it for a paper version of captain’s ball, monkey, or just simple ball passing. The game ends when the ball gets flattened, but don’t despair. Simply blow it into shape again. Be careful to not tear the ball apart though! 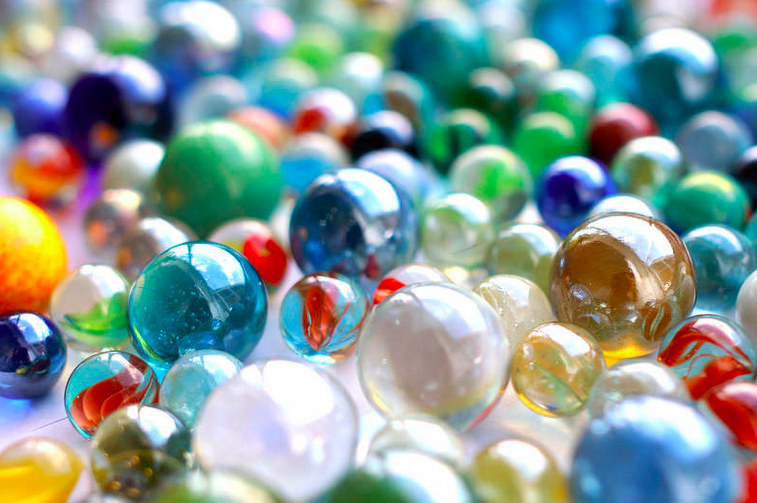 Marbles, or better known as goli, came in different forms and colours. Its aesthetic appeal also led many to collect and trade marbles. My favourite way to play with it would be to drop the marbles all over the floor, watch them bounce and hear the characteristic sound it makes. Just be sure not to play them in the middle of the night – or your paranoid neighbours will turn into insomniac pandas the next morning thinking there’s a ghost child upstairs playing goli.

How to play: Gather 2 or more people to begin the game. Draw a circle on the ground and aim to knock your opponent’s marble out of the circle. Every player must contribute their marbles by placing them in the circle. The player with the most marbles at the end wins. 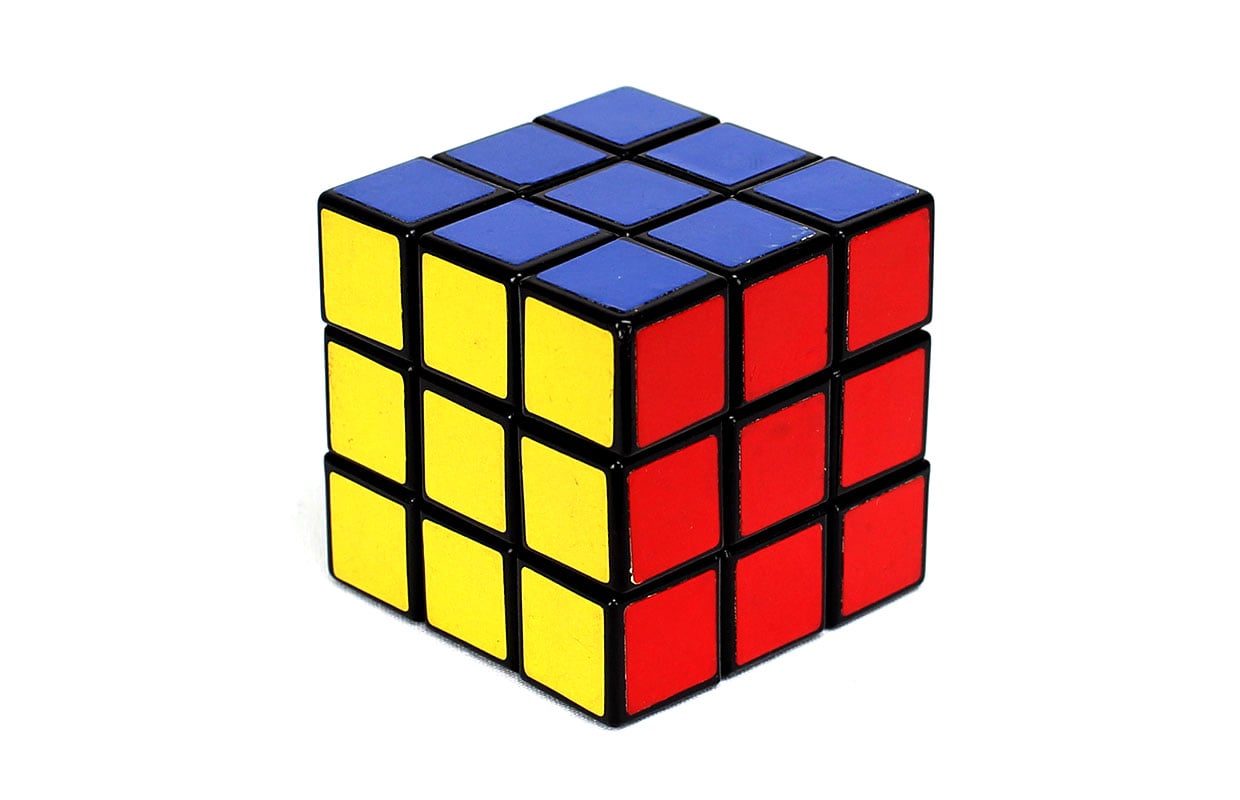 A puzzle game with different coloured stickers on each of the six faces. The pivot mechanism enables one to mix up the colours by twisting the cube. I could never figure out how to solve a Rubik’s cube and had to resort to cheating by disassembling the cube – until I realised it was another feat to piece them back.

How to play: Get a friend to mess up the colour sequence. Then, solve it by reverting to its original form. Sounds easy? Ha. 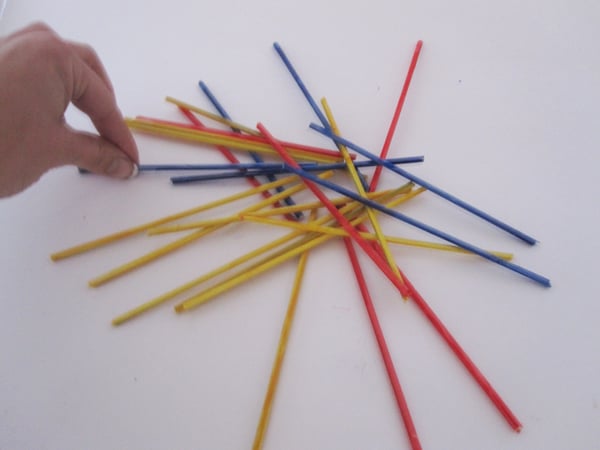 Colourful sticks that challenges one physically and mentally. You can even make your own using satay sticks and paint them in different colours.

How to play: Hold the sticks together in a vertical position and release them. The sticks should fall in random disarray with overlaps. Take turns to use a stick to ‘pick up’ another stick without moving another. A player can continue if they successfully remove one stick without affecting the others. The game ends when all the sticks have been picked up and players should add up their points. Yellow sticks are worth 1 point, blue sticks are worth 3 and red ones are worth 5 points. The winner goes to the player with the highest score. 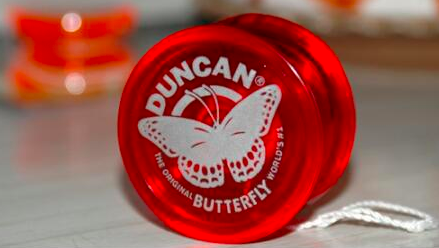 Essentially a coiled length of string looped around an axle. Looks easy to master but it’ll take a while. Noobs always seemed like they were unrolling toilet paper instead of controlling the yo-yo with swag. You can even perform yo-yo tricks on it, just don’t end up like him…

How to play: Throw the yo-yo downwards, hit the end of the string, then wind it up towards your hand and grab the yo-yo. Repeat. A Beyblade didn’t come cheap – it was more of a luxury toy. Curious about the toy, I remember getting a knock-off from a gacha machine. Needless to say, the workmanship was so poor the ripcord didn’t even fit the launcher properly. In fact, the Beyblade used to be so cool people mimicked the gameplay from the Beyblade cartoon. Boys liked to compete in class with their Beyblades but ended up having their toy confiscated by teachers instead.

How to play: The traditional way: insert the ripcord into the launcher and pull out the ripcord. Let the beyblade spin and perform stunts with it.

The more innovative way (thought up by the Japanese, as usual):

Happiness was much simpler in the past – cheap thrills like 10 cents country erasers kept us entertained for weeks. Life seemed to be a little slower, our lives were less hectic without the urge to feel constantly connected. The proliferation of the Internet and social media indubitably brought about more convenience, connectivity and facilitated globalisation, but our fast-paced everyday life may result in us overlooking the simple joys in life and neglect spending adequate time with our families.

What do you think? Do you miss life in the past or do you prefer our technology-reliant lives now? Let us know in the comments section down below!