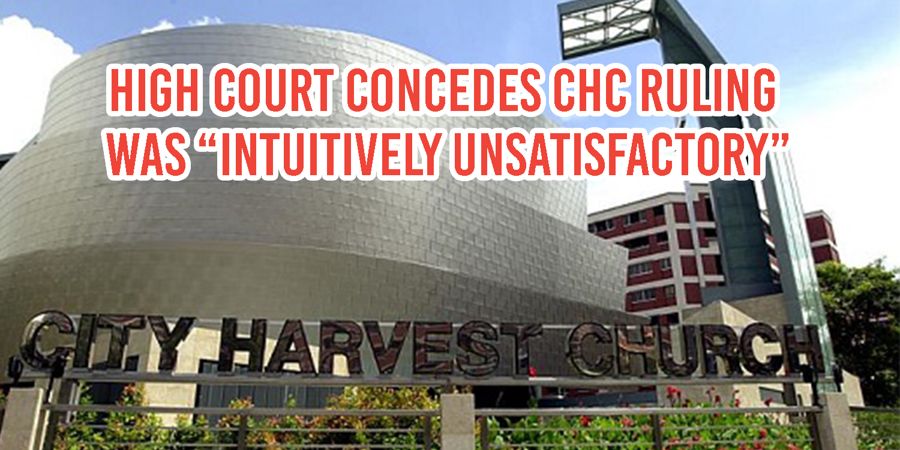 By now, you would probably have heard that the CHC saga ended today. Finally, right?

After almost 10 agonising years, six City Harvest Church (CHC) individuals on trial for misappropriation of funds have had their sentences finalised by the High Court.

The initial ruling holds and the appeal bid for harsher sentences has been rejected.

Reactions were mixed, with CHC supporters feeling relieved for their leaders, while others felt the sentences remained largely inadequate.

Interestingly enough, the High Court agreed — as they conceded that the initial ruling was “intuitively unsatisfactory”, according to Channel NewsAsia.

To find out why the initial sentences were upheld despite the High Court agreeing that the ruling was “unsatisfactory”,  let’s first tally up the final sentences meted out.

How long are the final sentences?

The following individuals are currently in prison and are set to continue serving their reduced sentences:

*Sharon Tan is out of prison after serving her 7-month jail term.

**Chew Eng Han is out on approved bail. He will begin serving his sentence from 22 Feb, after the Chinese New Year holiday.

All six of them were found guilty by the courts for misappropriating S$24 million from the church’s building funds from 2007 to 2009.

The money was used to support Kong’s wife Ho Yeow Sun in her pop music endeavours in the US.

Another S$26.6 million was subsequently used to cover up the first embezzlement.

Eventually, all six were charged under Section 406 of the Penal Code, for plain Criminal Breach of Trust (CBT), as they misused millions of donors’ funds in the name of religion.

But their sentences weren’t always this light.

In the beginning, all six were charged and convicted in 2013 of CBT as agents under Section 409 of the Penal Code.

The jail term that ensued, varied from 21 months to a maximum of eight years, as of November 2015.

However, all of them appealed their sentences.

In 2017, the judges explained that since the six church leaders were not considered “professional agents”, they could not be charged under section 409, as they did not offer their church services as a “commercial activity”.

As interpreted by the majority, Section 409 makes a mockery of the law.

Nonetheless, the High Court cleared six of the accused as CBT “professional agents”, and found them guilty of plain CBT under Section 406 in a split 2-1 decision.

Which brings us to the present result — with all six CHC leaders walking out of court with shortened sentences following the judge’s final verdict.

The long-drawn-out case finally comes to a close

Many Singaporeans may beg to differ on whether the final sentences are fair in this highly publicised and controversial case.

However, as frustrating as this verdict may be to some Singaporeans, we’ll still have to uphold the Rule of Law to ensure the legal system works.

You’ll be glad to know that this particular law is set to be revised, to ensure future cases get the most appropriate sentencing.

At least for some of us, that reassurance is enough closure for now.