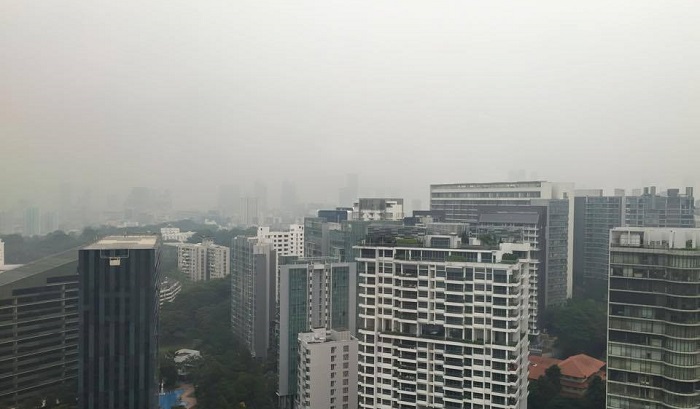 Minister for Environment and Water Resources Dr Vivian Balakrishnan has cleared the air, saying that the rumours surrounding cloud seeding in Singapore taking place ahead of the Singapore Grand Prix this weekend are false.

He was addressing a WhatsApp message below that was circulating in Singapore, telling people to be wary of the “chemically-induced” rain shower and its health detriments. The message even added that “If the haze level remains constantly high, F1 will be affect thus they are using rain to control [sic]”.

Hazy with a chance of hail

In 2013, an unlikely hailstorm hit the western part of Singapore, coinciding with the end of Singapore’s worst haze attack in history. Some Singaporeans assumed that the 2013 hailstorm was an effect of cloud-seeding to alleviate the haze.

It was the same hailstorm that brought us this gem.

Trying to discredit the government

Tan Chuan-Jin was even more distressed in his Facebook response, as he shared how some people were trying to “discredit the Government”.

He also gave a reminder that Singapore has activated the haze subsidy scheme for citizens in an effort to reduce medical cost for haze-related conditions.

While Dr Vivian Balakrishnan suggested that the rain produced by cloud seeding will “would almost certainly fall outside Singapore”, netizens questioned the effect of ongoing cloud seeding operations in Malaysia and Indonesia on Singapore.

On Tuesday (15 September), Malaysian authorities said in media reports that that they were deploying cloud seeding aircraft to clear the smoke as schools were close in Kuala Lumpur and its neighbouring states due to the worsening haze conditions.

Indonesia too declared a state of emergency in Riau province on Monday and deployed cloud seeding aircraft to induce rain, according to reports.

We don’t know if cloud seeding by our neighbours indirectly affect Singapore. Factors such as wind direction and sheer distance plays a role.

In any case, we just hope that the haze will clear out soon. Wearing the N95 mask while carrying an umbrella is just a few steps short of wearing full body suits.

Featured image via Facebook
With references from Gov.sg, Tan Chuan-Jin