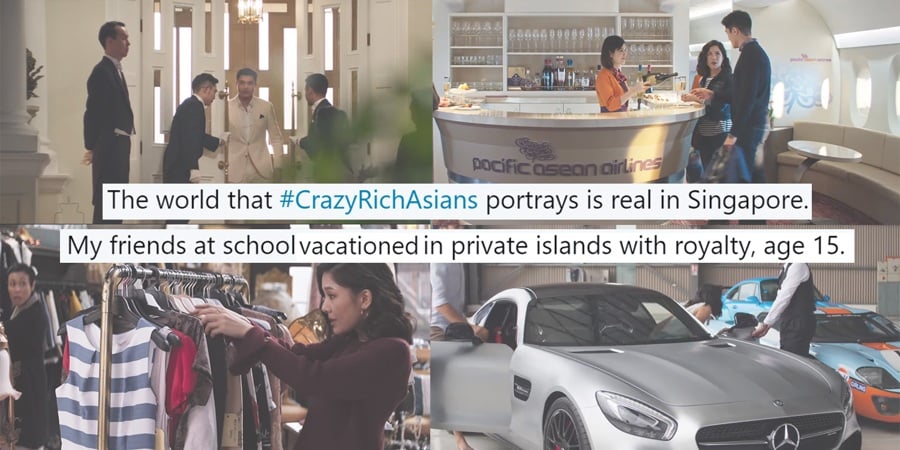 Crazy Rich Asians Exist In Singapore, According To Start-Up Founder On Twitter

A start-up founder thinks Crazy Rich Asians is an accurate portrayal of the Singapore elite — and she has stories to prove it.

My friends at school ate $30 lunches daily at nice restaurants, age 13; vacationed in private islands with royalty, age 15. I was an outsider in this world.

The SMU graduate says she’s been rubbing shoulders with Singapore’s elite society members since she was young.

And claims to have run in similar social circles as Kevin Kwan, the author of Crazy Rich Asians, sharing anecdotal experiences with the ‘top 0.05%’ in Singapore.

Here’s her thread in full. 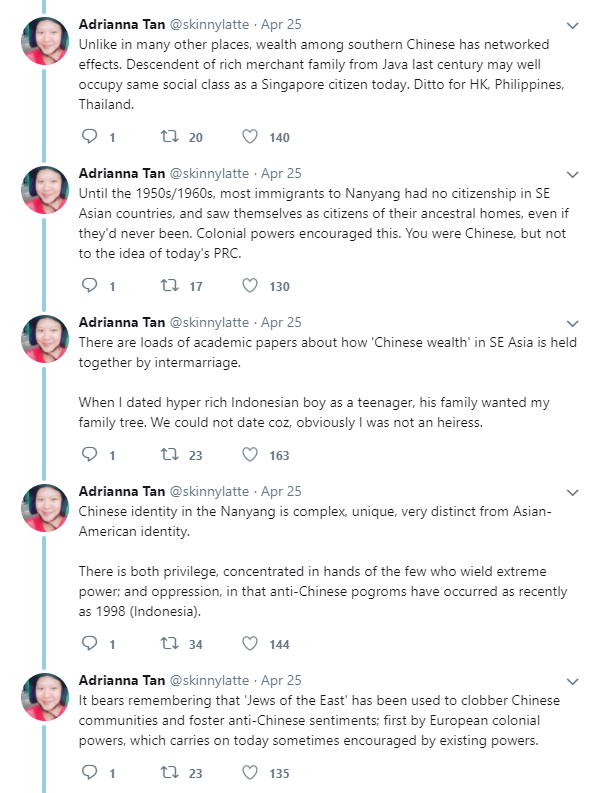 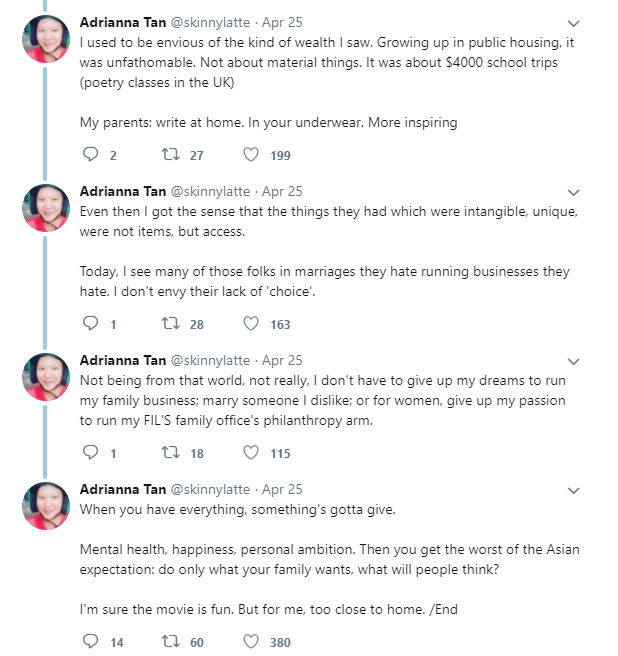 Now, let’s dive into the key points she raised.

The movie does not exaggerate

Many Singaporeans might think that the movie was meant to portray the “well educated middle class Singaporeans”.

The former might exhibit some traits of the latter, but the ‘rich’ and the ‘RICH IN BIG CAPITAL LETTERS’ are ultimately people from two different worlds. Hollywood isn’t dramatising how deep some elite’s pockets are; wealth unfathomable to laymen like us, is actually a reality in Singapore.

Adrianna doesn’t even have to watch the movie, she just has to open the ‘Facebook profiles of 20 friends’, to witness the same lifestyles unfold.

She recalls her friends, at the tender age of 13, enjoying lunches with a hefty price tag.

At 15, they were jet-setting to privately-owned islands with other elites, sometimes even royalty from other nations.

Even the problems that these rich people faced were truly the epitome of first-world.

We can’t imagine how much a bungalow “in the bad side of Bukit Timah” would cost.

Getting together with a doctor or lawyer might warrants lots of ‘woahs’, yet in that world it’s considering marrying down.

His family, upon realising she was not a heiress, objected to them dating.

This is not about Asian diversity

Netizens have been complaining that while the movie features an all-Asian cast, it only features ethnic Chinese people.

Talk about racial diversity — or the lack thereof.

Adrianna believes that the movie is not at fault, for they have accurately portrayed the ‘top 0.05%’.

With Chinese merchants being the majority of those who found opportunities and settled in Singapore, it’s no surprise that the ‘world of next-level riches’ is dominated by Chinese. 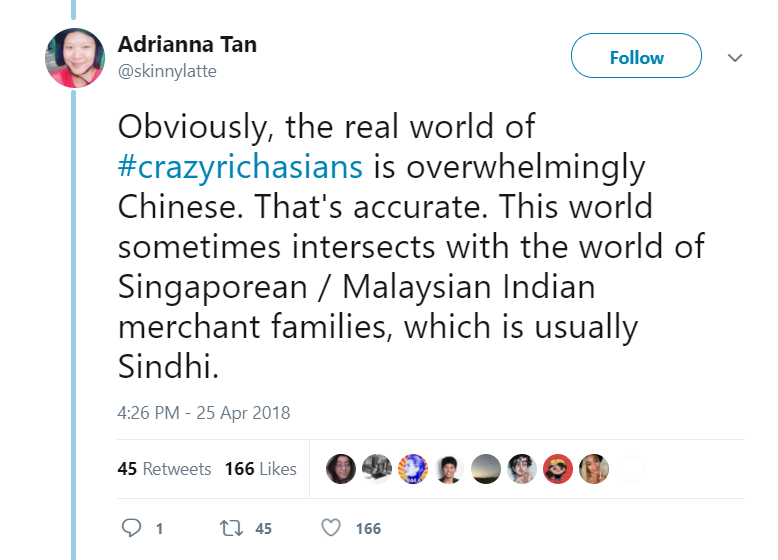 An accurate portrayal of the racial make up of the world of the rich, would mean compromising Asian diversity.

There have been complaints on how they aren’t real Singaporeans if they don’t have the iconic accent.

Yet Adrianna feels that it’s not just something the movie’s producers forgot about. 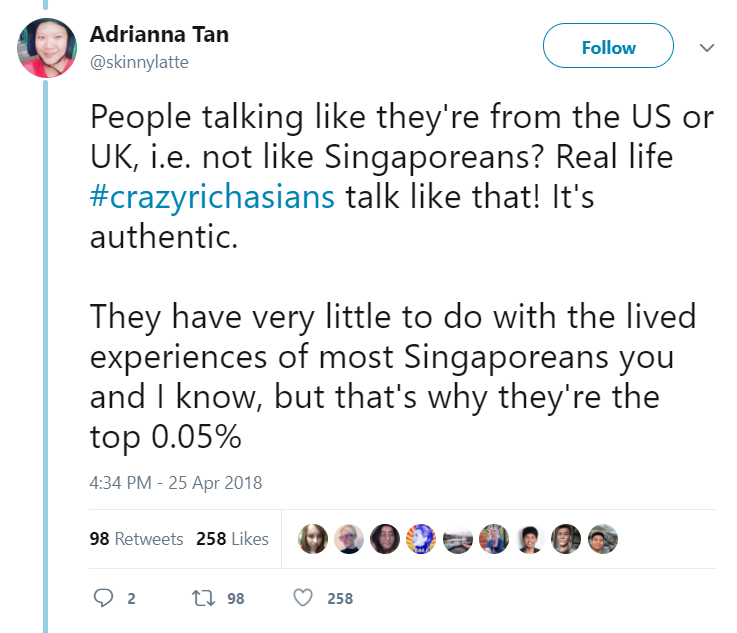 These people from the high society have vastly different lifestyles from the everyday Singaporean.

Naturally the accent, which one acquires in the process of growing up, is absent in this demographic.

Nevertheless, with or without the accent, they are Singaporeans too — albeit the crazy rich ones.

Ain’t that crazy after all

Crazy Rich Asians won’t be a win for Asian diversity, or a representation of the general Singapore populace — because it wasn’t meant to be.

While we probably cannot relate first-hand to this movie, perhaps we can gleam some insight into their world, as Adrianna puts it.

Perhaps actual crazy rich Asians, may be in our midst right now.

That’s not too crazy a thought anymore, isn’t it?