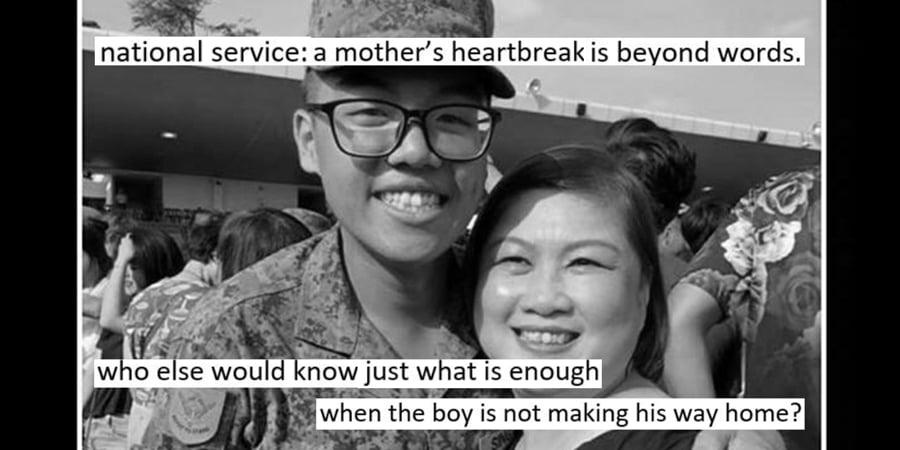 The wordless grief of a mother who’s lost her son, echoes in stark contrast to a nation yearning for answers.

900 people turned up to pay tribute to Corporal First Class Dave (CFC) Lee Han Xuan, who was laid to rest in a military funeral on Saturday (5 May), after succumbing to a heatstroke at Changi General Hospital.

A poet named Low Kian Seh, however, has channelled his emotions into a heart-wrenching tribute to the soldier.

The poem, posted in SingPowWriMo – a local poetry collective on Facebook – captures the essence of a mother’s heartbreak, and a nation’s longing for closure. 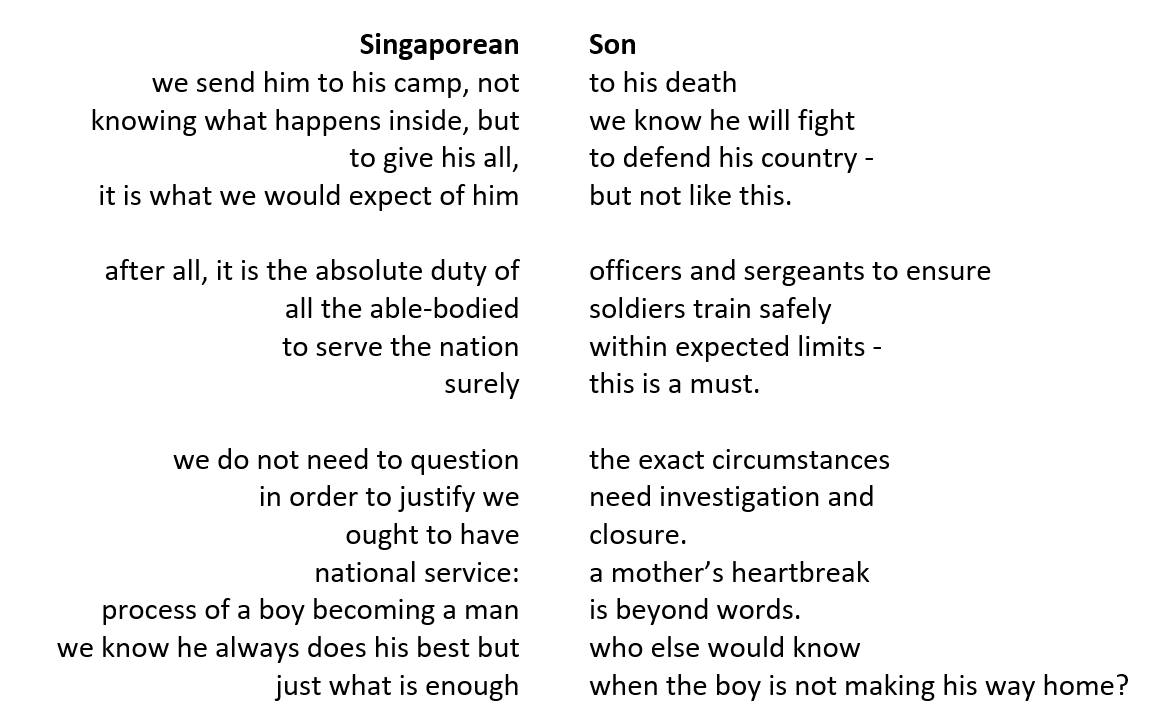 Singaporeans though typically stoic, have mourned collectively for his death and are seeking answers for this peacetime tragedy.

We discuss how the brilliant poem can be read in three different ways, portraying differing perspectives on the issue.

we send him to his camp, not
knowing what happens inside, but
to give his all,
it is what we would expect of him

after all, it is the absolute duty of
all the able-bodied
to serve the nation
surely

we do not need to question
in order to justify we
ought to have
national service:
process of a boy becoming a man
we know he always does his best but
just what is enough

Symbolising the perspective of a regular Singaporean, Low captures the lingering questions on the nation’s mind.

Like whether it’s every Singaporean man’s duty to lay down their lives for the greater cause of defending our nation.

Or if National Service is still the best ‘trial-by-fire’ to help our boys become men.

Finally, it poignantly questions “just what is enough”, if a soldier like Dave Lee has done his best, but tragically pays the price of his life.

to his death
we know he will fight
to defend his country –
but not like this.

officers and sergeants to ensure
soldiers train safely
within expected limits –
this is a must.

the exact circumstances
need investigation and closure.
a mother’s heartbreak is beyond words.
who else would know
when the boy is not making his way home?

Low details the heartbreaking perspective of a mother in the second part of the poem, simply entitled “Son”.

Beginning with a soldier willingly laying down his life for his country, “but not like this”.

He also alludes to the disturbing allegations of mistreatment which have surfaced, mentioning officers and sergeants who should ensure that “soldiers train safely within expected limits”,

And that a “mother’s heartbreak is beyond words”, by quoting Dave’s mother’s exact words from a CNA interview,

What is enough, when the boy is not making his way home?

We can’t help but agree, as no Committee of Inquiry result or military honour, can truly stem the pain of enduring the loss of a loved one.

we send him to his camp, not to his death

knowing what happens inside, but we know he will fight
to give his all, to defend his country –
it is what we would expect of him but not like this.

after all, it is the absolute duty of officers and sergeants to ensure
all the able-bodied soldiers train safely
to serve the nation within expected limits –
surely this is a must.

we do not need to question the exact circumstances
in order to justify we need investigation and
ought to have closure.
national service: a mother’s heartbreak
process of a boy becoming a man is beyond words.
we know he always does his best but who else would know
just what is enough when the boy is not making his way home?

Read collectively, the harrowing crux of the poem undeniably surfaces.

A Singaporean son who’s sent to camp to serve, and “not to his death” — that he would defend his country, but not be expected to give up his young life during peacetime.

The “absolute duty” of his officers to ensure that safe training is conducted for “able-bodied soldiers”, within “expected limits” only.

A nation’s yearning for closure, and for the results of the investigation to prevent similar incidents from occurring.

As well as a mother’s indescribable heartbreak, for a boy who “always does his best”, but will never make his way home again.

Dave Lee’s tragic death, will continue to haunt those who have been personally affected, and consume the nation’s collective consciousness as a whole.

However, we thank Low for his moving tribute for a fallen soldier who’s paid the ultimate price.

Regardless of the words that remain unspoken, from either perspective, we will always remember Dave as a Singaporean son.

No posthumous promotion nor military funeral with the highest honours accorded, will ever bring back this loving son back home to his mother.

We extend our condolences to the family of Dave Lee once again, in their time of loss. The nation weeps with you.