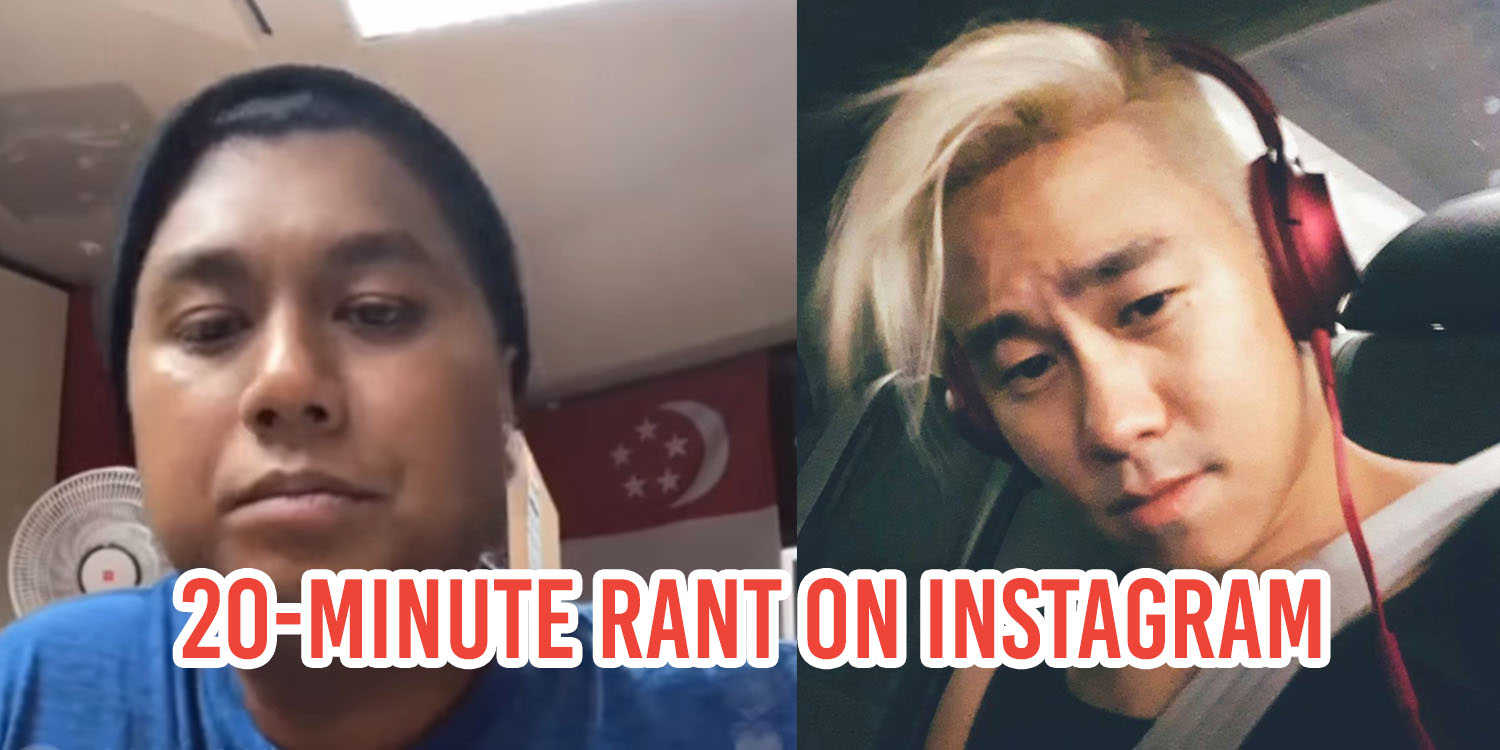 She was 18 and in her first job as Eden Ang’s personal assistant. He knew that she had a boyfriend.

They were in constant contact over WhatsApp, where Eden Ang made several lewd suggestions, before the alleged assault happened.

According to popular local YouTuber Dee Kosh in a 20-minute livestream video on Instagram, at least.

In the video that was originally done on Instagram live and then uploaded on YouTube, Dee Kosh spoke about the viral Facebook post by local cosplayer Kuroe Kun, regarding Eden Ang’s alleged sexual misconduct.

He also provided ‘evidence’ to back his case, including screenshots of WhatsApp conversations between Eden Ang and the victim.

The video has been posted on Dee Kosh’s YouTube channel, embedded below. We summarise the key points from his video after the jump.

Dee Kosh criticised the male investigation officer who was apparently dismissive of the victim’s story when she made a police report, musing,

I know they do their jobs well, but that is some shit from the 70s.

He was also highly critical of the apparent victim-blaming, stating that the victim “could have been naked and it still wouldn’t be her fault”.

Dee then demanded for “something…to be done in the police system of Singapore”.

18-year-old victim was DMed by Eden Ang on Instagram

Dee Kosh revealed the victim was only 18 years old, and that girls her age tend to be “impressionable, especially when it comes to famous people”.

He went on to outline the situation in which Eden Ang got to know the victim — at a boxing match.

The victim had taken a video of Eden Ang and posted it on Instagram, tagging the YouTuber.

Eden Ang then initiated contact by directly messaging the girl, ultimately offering to hire her as his Personal Assistant (PA).

The radio DJ read out excerpts from WhatsApp conversations between the two.

He spoke about an occasion where Eden Ang allegedly tried to control the victim’s choice of clothing — saying the victim should “cover up” on one day and “dress different” on another.

When the victim said that she would rather dress professionally on both days, Eden Ang allegedly replied the following,

Good girls listen to daddy.  You should call me that, actually.

He opted not to reveal the messages to the camera but promised to release it on Twitter when he had “blurred everything that needs to be blurred out”.

In the same vein, Dee Kosh disclosed that the victim clearly delivered her denial of consent via text to Eden Ang, which read “don’t touch me”. 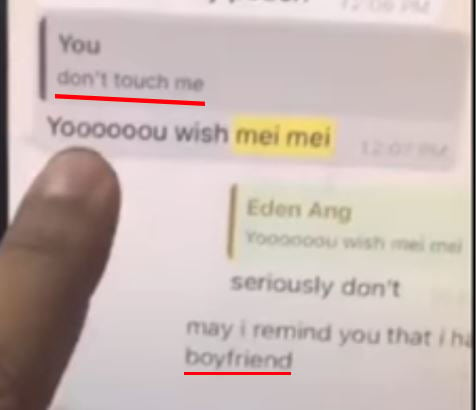 To which Eden Ang allegedly replied, “Yoooooou wish mei mei”, leading the victim to remind Eden Ang that she had a “boyfriend”. 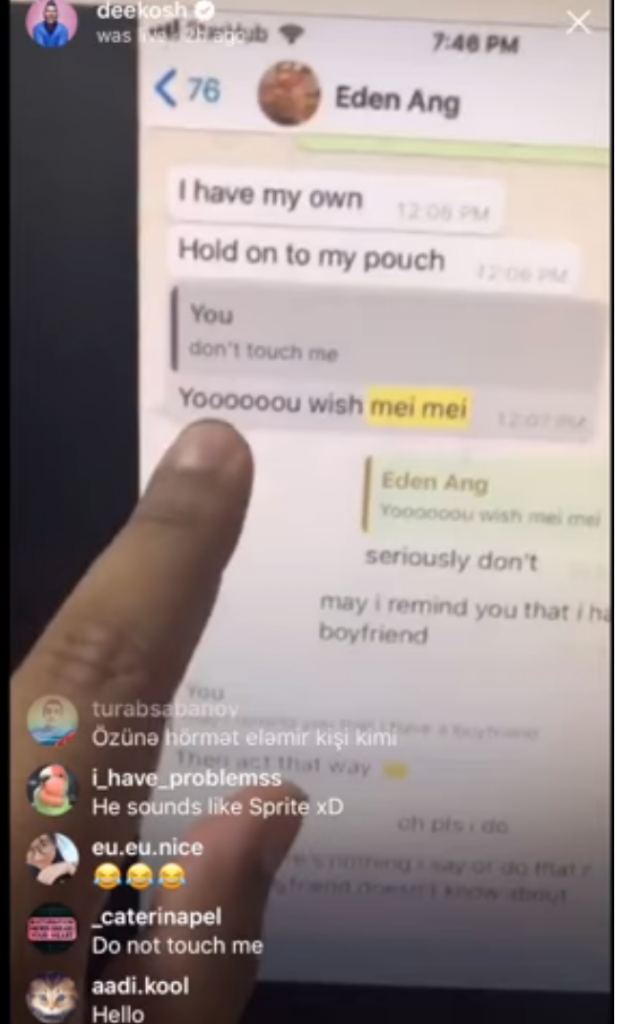 We have provided an accurate transcript of the dialogue in the picture, due to the image being obscured in the screencap.

Eden: Yoooooou wish mei mei (6 Os)
Employee: may i remind you that i have a boyfriend
Eden: Then act that way *unidentified emoji*
Employee: oh pls i do
Eden: There’s nothing i say or do that your boyfriend doesn’t know about

At this point, Dee Kosh expressed his outrage for a few moments before composing himself and continuing his revelations.

Skipping ahead to the “day of the crime”, he showed a screenshot of a conversation where Eden Ang asked the victim to wear a “cute g”.

This implied that Eden Ang asked the victim to wear a kind of lingerie called a G-string or thong. 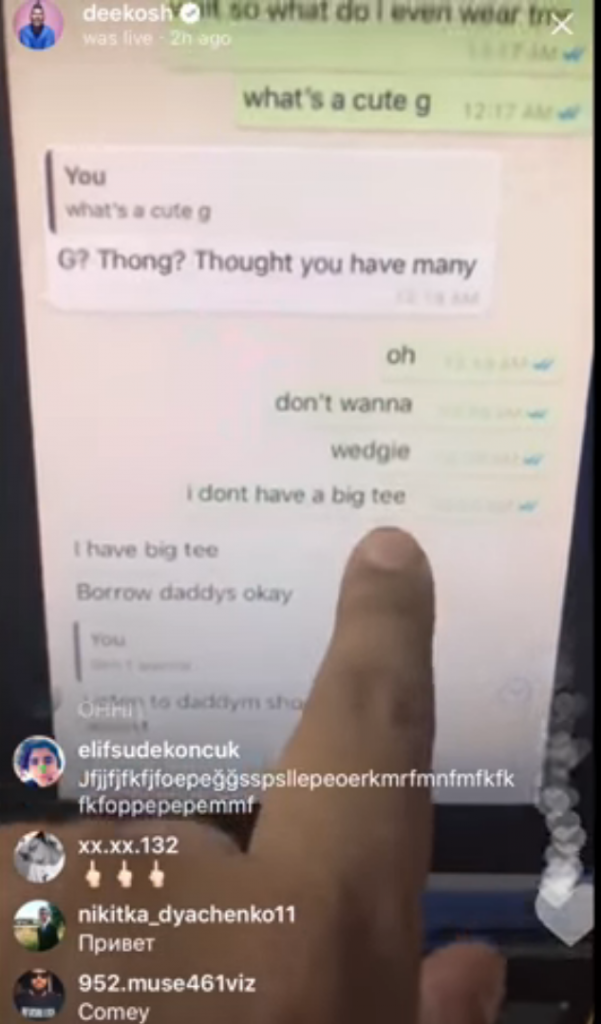 When the victim said that she didn’t want a “wedgie” or “have a big tee”, Eden Ang allegedly brushed away her excuse and offered to lend her his T-shirt instead.

The transcript of the second blocked screencap reads,

This implies that Eden Ang continued to insist that the victim listen to him and show-off her best ‘assets’ by wearing revealing lingerie.

Dee Kosh empathises with victim as he was abused as well

On the day of the alleged assault, the victim was apparently wearing the article of clothing requested by Eden Ang, having been pressured into wearing it.

According to Dee Kosh, she was cleaning pieces of company equipment when Eden Ang told her to take off her pants before proceeding to improperly touch her.

At this point of the recollection, Dee Kosh was on the verge of tears, saying,

I know how it feels to feel powerless in a situation.

He divulged that he was also abused when he was young, which may be why he was getting emotional.

Saying that he had “stated all the facts” and told the story “as I know”, Dee Kosh then called Eden Ang a “sexual predator”.

Dee Kosh alleged that Eden Ang used his elevated social standing as a “famous person” to take advantage of this 18-year-old girl.

He then challenged Eden Ang to answer these four questions:

And concluded with this chilling statement,

He expressed admiration for Oprah Winfrey’s Golden Globes acceptance speech, echoing her sentiments that a “day of reckoning” is coming for sexual predators.

Helper In S’pore Hits 1-Month-Old Baby 3 Times Due To Stress, Gets 9 Months’ Jail