Since the first case of alleged degree mills surfaced, netizens have been hard at work digging up more cases of people with papers from such dubious sources.

Degree mills are unaccredited institutions which give out degrees for a fee.

We covered the initial case of Nisha Padmanabhan and IDA here.

As with every issue, there are two camps regarding questionable degrees. One focuses on the integrity, while the other camp is more concerned with the actual work done over mere qualifications.

A petition was started over IDA’s inaction on the matter, calling for them to fire Nisha Padmanabhan because of her dishonesty. Her LinkedIn profile has been deleted.

But Southern Pacific University supposedly gives legit degrees, someone claimed in response. The reasoning? Over 200+ people on LinkedIn have either a Bachelor or Master’s from the university, and the degree is not fake because there were proper credit hours awarded through lecture sessions and dissertations that students had to complete.

Meanwhile, the IDA saga has triggered a search for more people with alleged fake degrees. The count of these threads on Hardware Zone has increased to 11 since the first one appeared weeks ago.

One of these is a lecturer at Ngee Ann Polytechnic’s Film and Media Studies (FMS) faculty, Marc Jonet.

Breyer State University is an unaccredited university, and was flagged as being a degree mill by its home state of Alabama, causing it to shut down in 2008. It has since moved to Panama.

In Jonet’s LinkedIn profile, he states that his Master’s degree in Psychology and Counselling was obtained out of personal interest. He has been employed at Ngee Ann Polytechnic since 1999.

Past students of Jonet have come out in support of him, stating that his work more than made up for his alleged fake degree.

Another one outed for having fake degrees is “Dr” Terence Seet, who was employed by Raffles Education Corporation Limited from 5 July 2010 to 18 September 2013. 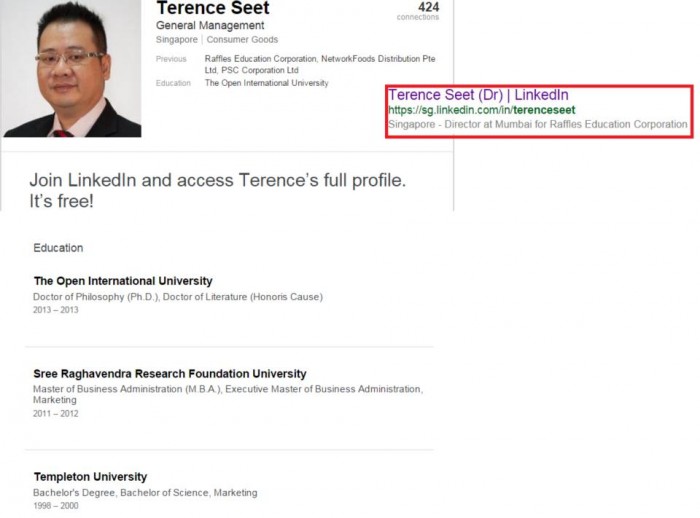 His degrees were all obtained from known degree mills, such as Templeton University.

Soon after news of “Dr” Seet’s degrees broke, Raffles Education Corporation Limited wrote a letter to All Singapore Stuff stating that they’d made him resign after finding out he had obtained degrees from degree mills.

We had initiated an investigation to validate Terence’s qualifications after he addressed himself with a professional title of “Dr.” when dealing with people outside of our organisation. The investigation revealed that Terence’s doctorate was from a degree mill. In consequence thereof, Terence was asked to resign with immediate effect in September 2013 and which act is in conformity with the established practice of our company.

Netizens also uncovered a Saminathan Suresh Somasundaram, a Malaysian working at Standard Chartered Bank here as a Business Analyst. He obtained a Bachelor’s degree from Southern Pacific University, and had only secondary school education prior. His LinkedIn profile has been deleted following this revelation.

There are even more of these people, who can be found in this thread.

The Ministry of Manpower (MOM) conduct their own random audits, which are carried out by a firm in New Delhi named Dataflow Services. There are about 500 to 600 checks a year.

However, employers are expected to do their own checks rather than relying on MOM; the audit checks are done in tandem with employer checks.

Seems like netizens are doing a pretty good job of uncovering people with degree mill certifications though!