Must Share News – Independent News For Singaporeans
Home Viral Facebook Wheelchair-Bound Elderly Man At Dignity Kitchen Forced To Use Escalator, Due To... 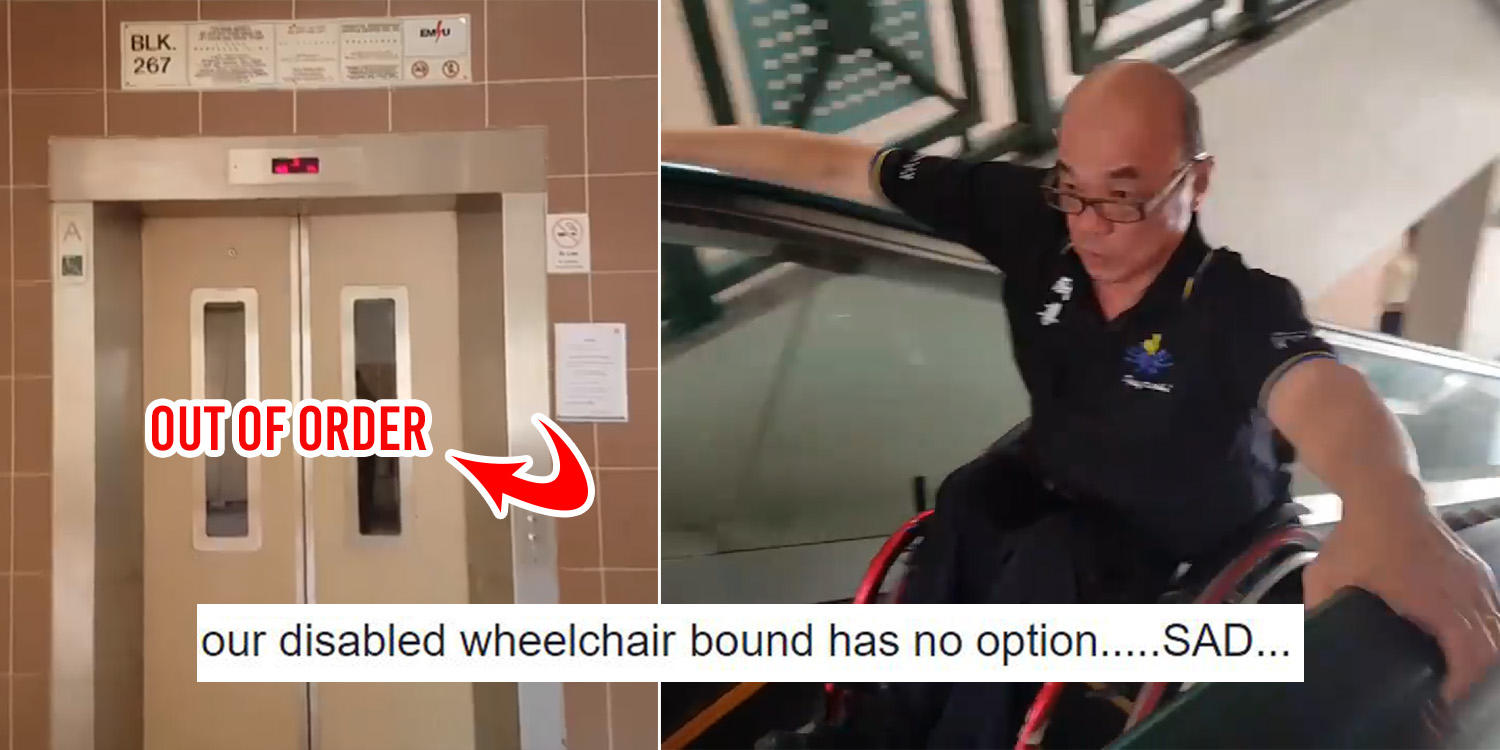 The escalators and elevators in their building are not working and it has apparently been that way for a while, according to this Facebook post on their page.

In the video, three elderly men can be seen having trouble getting to the ground floor, after presumably dining at the second floor of the hawker centre.

Two men are also seen to be having trouble descending the steep escalator steps, with the lift down for “maintenance”. 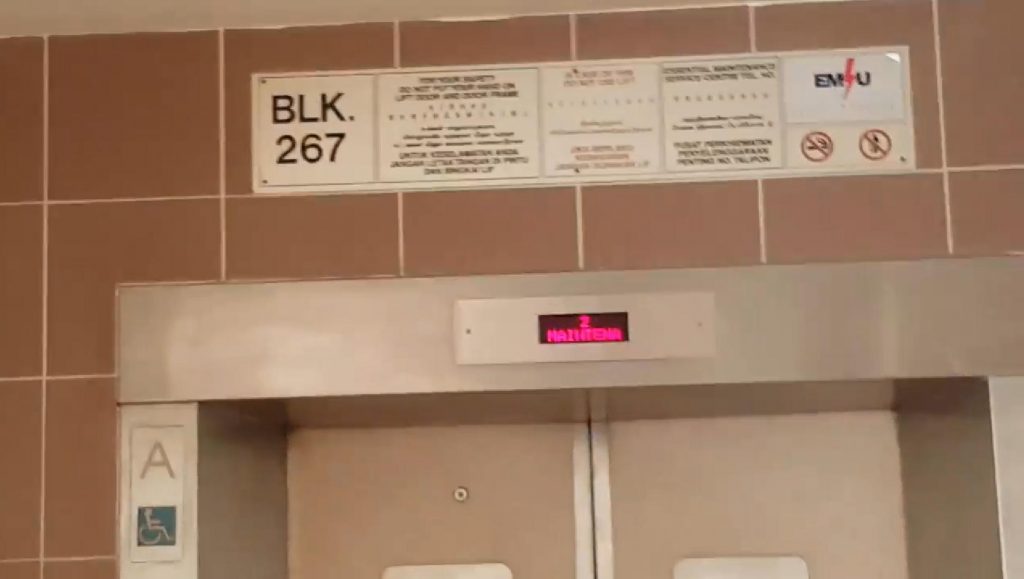 A third elderly man, who was wheelchair-bound, had to resort to an astonishing feat of arm strength as he maneuvered his wheelchair down the escalator — backwards no less.

But first, let’s take a look at the parties that may be involved in causing this unfortunate situation in the first place.

Why didn’t the town council do anything?

Dignity Kitchen is located in Serangoon. It’s a stone’s throw away from Serangoon MRT.

So of course it’s located within Braddell Heights, in Marine Parade GRC.

According to the website of Marine Parade Town Council, their Serangoon office is located at Blk 266, which is literally next door from Dignity Kitchen. 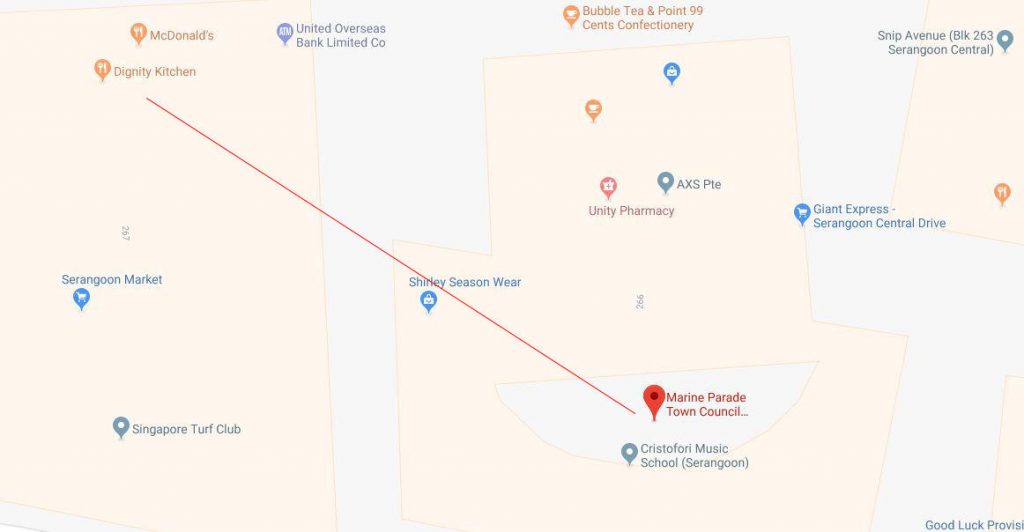 Then again, we don’t know anything about the situation except from their rhetorical question posed in the post,

How can the authority tolerate such non performance of their service for so long [?]

Of course, you’d think it would have been easy for someone from the Town Council to pop over and have a quick look-see.

Why didn’t the MP-in-charge do anything?

However, the MP-in-charge of Braddell Heights specifically, is none other than Mr Seah Kian Peng.

According to the embedded Facebook post below, he definitely knows that Dignity Kitchen exists, posting about them a week prior to Dignity Kitchen’s video.

That’s something, if nothing else. Of course, we’re not sure why he didn’t step in as well.

Why didn’t Dignity Kitchen do anything?

Apparently, the escalators are maintained by Sigma, of breakdown-more-often-than-MRT infamy.

As a result of this fantastic business approach, the “procurement process” is ongoing and residents are advised to use the lift instead for the time being.

Which unfortunately broke down as well in this case.

Perhaps this makes Dignity Kitchen’s lament of they “cannot do anything but to wait”, in reference to the malfunctioning lift and escalator, make a lot more sense.

We imagine that over the course of two years, most avenues for recourse would have been exhausted.

We’re working on it

Let’s get into MPTC’s response.

In a comment posted just a day after Dignity Kitchen’s video, the Town Council has come through with a swift reply.

A lengthy comment states that they’re seeking residents’ understanding while they “work on resolving the escalator issue” and “carry out maintenance works to the lift”. 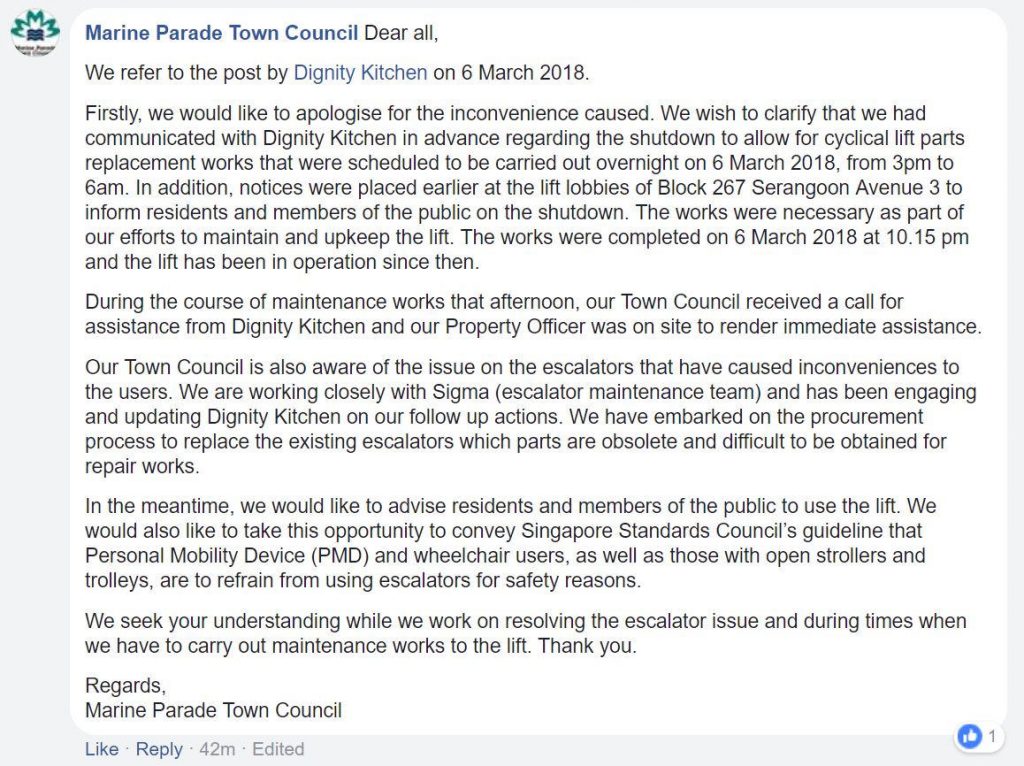 According to MPTC, the lifts were down for “cyclical lift parts replacement works” that were part of their efforts to “maintain and upkeep the lift”.

It started at 3pm and was ostensibly completed at 10.15 pm and has been in operation since then.

A thing that should not be

If you think walking down a broken down escalator is inconvenient, imagine how daunting it is for someone with a physical disability. Or if they’re in a wheelchair.

Situations like these make Dignity Kitchen inaccessible to many of their regular customers and employees, who have trouble getting around as it is.

We at MustShareNews simply hope that the situation is resolved as soon as possible for the safety of everyone, and that MPTC will come through as promised.