This morning (29Dec), The Straits Times happily reported that that “the DTL2 is a relief for Bukit Panjang Citizens,” saying that it has shortened the train journeys of residents, as well as provided convenience to people.

The DTL2 rides would be free from the day of its opening (27 Dec) until 1 Jan 2016. However, it seems like there’s no free lunch in the word —  the free rides will surely come at the expense of longer commuting time due to train delay.

It’s no secret that Singaporeans are champion grumblers — with train delays, many naturally took to social media to air their grievances.

Here are 5 types of commuters-turned-angry-netizens live reporting on the DTL2’s long delay:

Of course, no emo tweet is complete without a sad face at the back.

“Of course SMRT would screw up on [the] opening week of DTL2.”

The level of sarcasm is too high here. LOL.

3. The slightly displeased commuter who wonders if SMRT uses a tweetbot

This kind of commuter would go on Twitter to complain and express his disappointment.

after this tweet, there was announcement for "stop a short while", which is not true, and train moved. Wow. Does #SMRT has a tweetbot?

The concerned commuter would give advice — such as staying off the DTL2 due to 20-minute intervals between stations — to other commuters.

However, they will also showcase their dissatisfaction by scornfully thanking SMRT for making them late.

This type of commuter would start blaming the government to vent their frustration on MRT breakdowns.

In this case, the enraged commuter scolds KBW (probably referring to Khaw Boon Wan, we dunno ¯_(ツ)_/¯) for giving “cheap talk and lip service” as the train still breaks down.

Is the DTL2 a boon or bane?

It seems quite the nightmare to be stuck on the train with expected 20-minute intervals as opposed to the normal interval of 3 minutes.

Prior to the Downtown Line 2’s official opening, Transport Minister Khaw Boon Wan had already warned commuters to expect several problems. Despite today’s train delays on DTL2, everything else is “so far so good”, according to the Minister’s Facebook post.

DTL2: so far so good. More than 360 SBST staff were at various stations to help guide passengers. Behind the scene,…

In addition, let’s not forget the unsung heroes who worked tirelessly while we were asleep, just so we can love our rides. 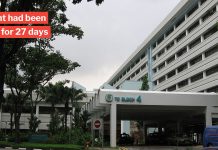