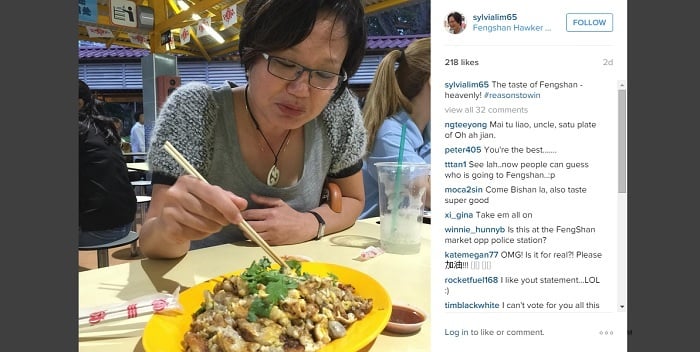 We well and truly are into “election season”.

Especially when an innocent Instagram picture of a person tucking into orh luak (oyster omelette) can tick Singapore’s Deputy Prime Minister off.

In response to that offensive picture, DPM Teo had this to say:

Now we see the chairman of the town council saying that Fengshan SMC looks quite delicious. What’s going to happen? You’re going to swallow up Fengshan? For what purpose? To serve the residents of Fengshan? Or is Fengshan delicious because you want to add it to the pot? And help the town council with the deficit?

DPM Teo is, of course, referring to the AHPETC saga that plagued WP for much of early 2015.

We’ll be the first to admit that the orh luak at Bedok 85 is pretty good, but turning some innocent oysters into political leverage has got to be a first.

More pot shots will be fired as we lead up to the elections, but please, let’s just leave our food out of this.

Featured Image via Instagram
With reference to Channel NewsAsia

Sinister Clouds Drift Over Telok Blangah On 2 Dec, A Magnificent Prelude To Our Wet Morning

Moderna Seeks S’pore Authorities’ Approval For Covid-19 Vaccine, May Be Available In Jan