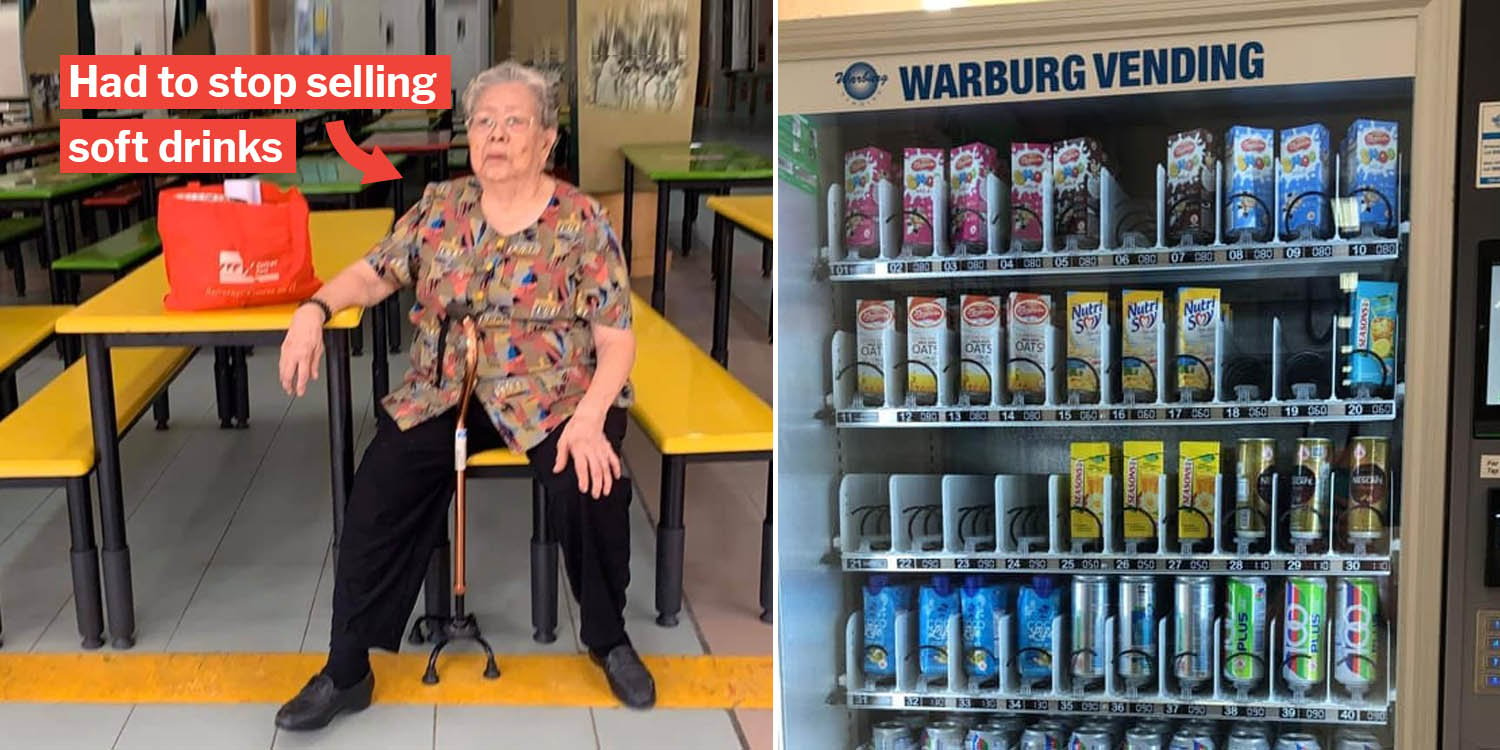 They clarified that the drink stall auntie, Mdm Lim, was at no point “ever asked by the school to leave”.

The addition of the vending machine was apparently meant as a transitional measure for their students.

Mdm Lim is part of the SCGS family, and loved by staff and students.

However, we were told in mid-December that Mdm Lim would not be returning to the school in 2020. We understood that her family was concerned about her working in her old age, and we respected their decision.

Running up to Mdm Lim’s decision to leave the school, SCGS was trying to provide healthier food and beverage choices to our students and staff and was in the process of combining one stall to provide fruit juice, hot drinks, fruits and healthy snacks, instead of the school having two separate fruit and drinks stalls. Understanding that some students may need time to make the switch from sweetened drinks to water, we brought in a vending machine, which dispenses drinks bearing the Health Promotion Board’s ‘healthier choice’ symbol, as a transition measure. We have also been encouraging our students to make water their drink of choice, and hope to gradually reduce the frequency of replenishing the machine.

In October, Mdm Lim signed a contract to run a combined fruit and drink stall, together with the previous fruit stall vendor. At no point was she ever asked by the school to leave.

School canteen vendors make a huge difference to a student’s life. One auntie has worked at Singapore Chinese Girls School (SCGS) since the 1950s, seeing the school through multiple locations and renovations.

Despite her loyalty to the school, the elderly drinks vendor made the decision to leave, likely due to managerial constraints on her trade. 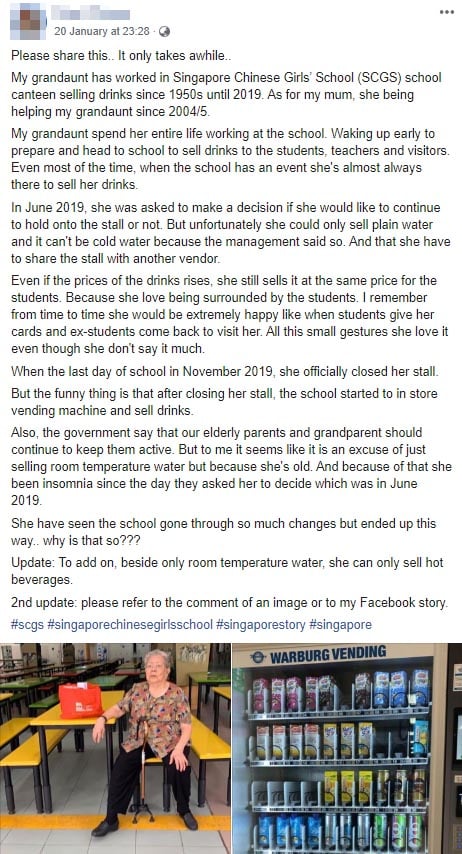 In her post, she explained how her grandaunt had left her previous job as a drinks vendor at SCGS, but later discovered that she’d been replaced by vending machines.

According to Ms Chang’s post, her grandaunt had worked at SCGS as a drinks vendor since the 1950s.

She loved her job selling drinks to the students, teachers and visitors, and woke up early to prepare for her work every weekday. 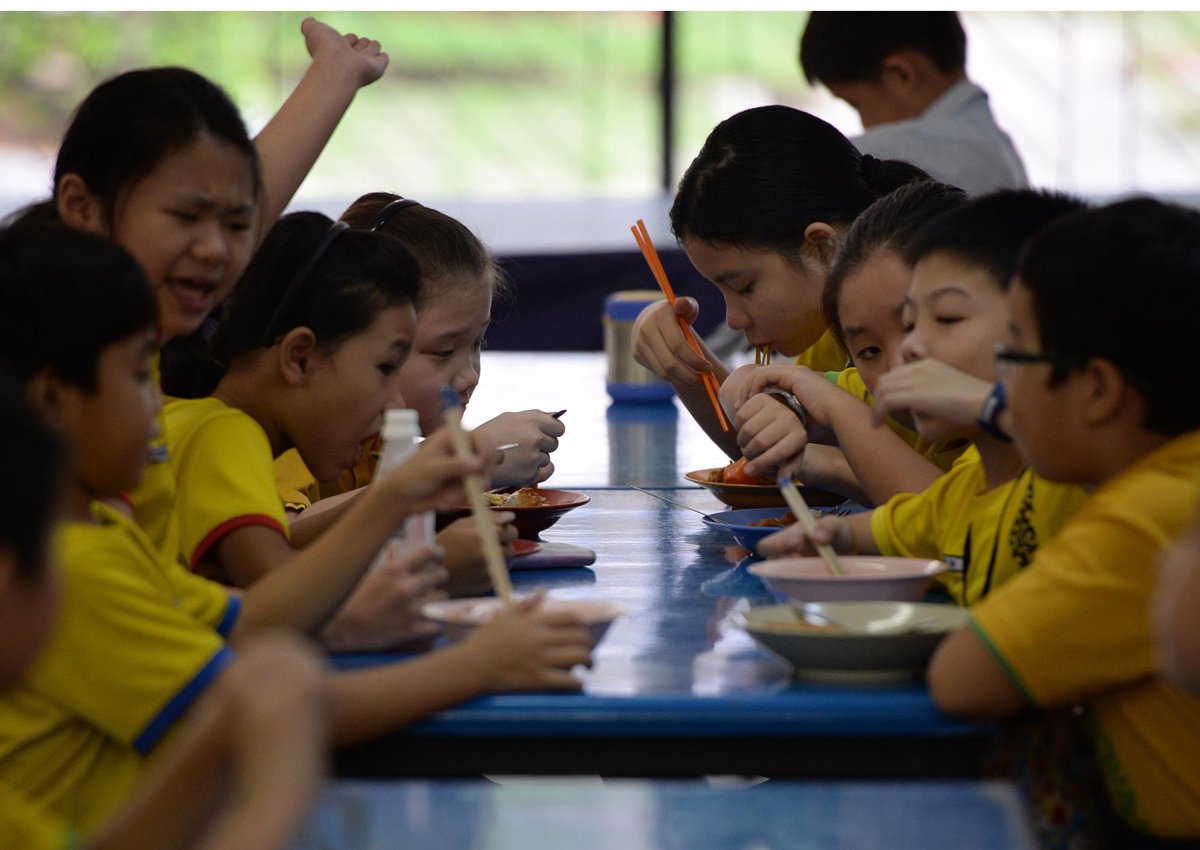 Ms Chang recounted how her grandaunt stayed with the school for so long as she loved the small gestures of kindness the community showed her. She would receive small cards from students occasionally, as well as visits from ex-students.

Although she never expressed it verbally, it was clear that she felt appreciated and this spurred her to keep working there. She even kept prices of her drinks low for the students despite costs rising over the years.

We can only imagine just how devastated she was when she had to close her stall for good.

In Jun 2019, she was told that she would have to make changes to her stall the following year.

She would no longer be allowed to sell soft drinks – only hot beverages and room-temperature water were allowed. She’d also have to share a stall with another vendor.

Given that soft drinks make the bulk of a drink stall’s sales, her sales would take a massive blow. She probably wouldn’t be able to maintain her business.

Finally, Ms Chang related that her grandaunt officially closed her stall on the last day of school in Nov 2019.

Ms Chang discovered something surprising after her grandaunt left – vending machines have now surfaced in the school.

She speculated that the restriction of drinks was an excuse to make her grandaunt leave the school due to her age.

Her grandaunt has been experiencing insomnia since she was asked to make the decision last Jun. It has allegedly taken a toll on her health.

Many ex-students and current students of SCGS expressed their concern for the drinks stall auntie on social media. Currently, Ms Chang’s post on Instagram has close to 7,000 likes.

Others wish the drink stall auntie well, commending her on her kind working attitude.

SCGS’s batch 2CO of 2020 has even made a petition, “GET OUR DRINK STALL BACK”. The petition has closed, but you can still view their comments.

Some of them voiced out that they are fond of the drinks stall auntie, expressing sadness that she has left the school.

We have written to SCGS for their comments, and they have yet to respond at the time of writing.

Until then, it is unclear why SCGS purportedly insisted that their former drinks vendor to stop selling soft drinks. Yet they installed soft drink vending machines after the vendor’s departure.

We hope that Ms Chang and her grandaunt will receive closure. It is unfortunate that the student’s fondly-remembered vendor had to leave, but we hope she can use her free time now to rest.