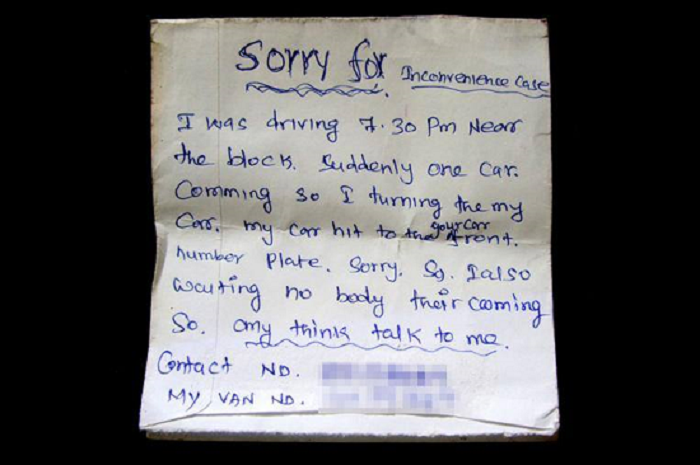 Mr Panneerselvam Kulothungan was driving a company van when he accidentally scratched a car as he was entering a car park at Bukit Batok Central in April. He waited for the car’s owner for an hour but decided to leave a note on the car’s windshield as the owner was still not present. 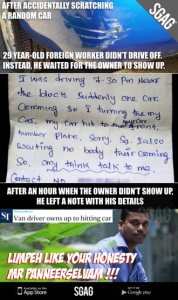 Later on, Mr Kulothungan went the extra mile of putting a second note in a plastic bag in case of rain. When the owner did not contact him overnight, he went back to the parking lot the next day to look for the owner.

Mr Kulothungan’s action is the definition of the word integrity.

Car’s owner reaction to the note

Mr Wee was initially furious when saw the damage at first, but he calmed down when he found the notes on his windscreen.

After all, who wouldn’t melt seeing such braveness?

Mr Kulothungan  managed to meet with Mr Wee and gave his explanation for the accident. Mr Wee reassured Mr Kulothungan that he would settle the cost of damages himself. The total amount of damages was estimated to be about $300.

Mr Wee was impressed with such honesty that he wrote about the entire incident to The Straits Times.

The story was so impressive that the Traffic Police complimented him for his act.

The true meaning of integrity

Mr Kulothungan holds the value of integrity with utmost pride when he admitted to his mistakes. Not many are willing to declare what they did, especially when there are no eyes lingering around.

What would you do if you are in his place? Would you reveal yourself in such lengths or just avoid it like a plague?

“If you damage someone’s things, you should at least apologise. It is not a good practice in life to run away from your mistakes, as what goes around comes around.” 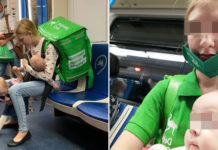 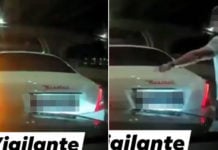