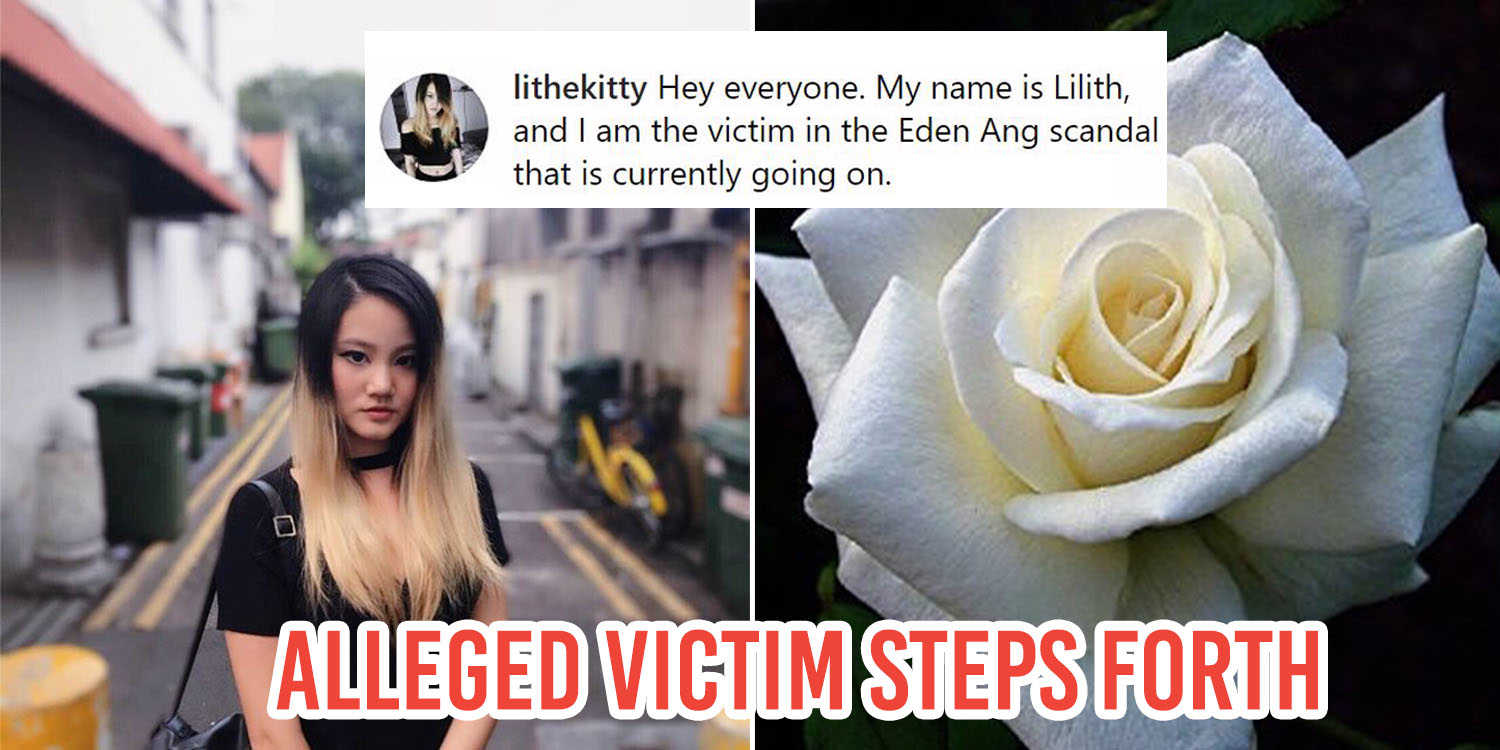 On Tuesday (30 Jan), the previously unknown person at the center of the Eden Ang sexual harassment case stepped forth to confirm that the allegations regarding Eden Ang were true.

The girl, who only goes by her first name – Lilith – on Instagram, posted an image of a white rose along with the statement.

Possibly in reference to the #MeToo  and #TimesUp movements against sexual harrassment, where many celebrities donned a white rose on the red carpet as a sign of support at the 2018 Grammy Awards ceremony.

Hey everyone. My name is Lilith, and I am the victim in the Eden Ang scandal that is currently going on. I haven’t said anything so far because i’ve been scared. no, terrified by what speaking up would mean..for my safety, for my dignity, for my family and for my friends. But enough is enough. It has recently come to light that there had been some discrepancies in the post that my friend had put out. I am here to set the record straight. Everything she said about Eden is true. He did touch me after me repeatedly telling him no, both online and offline. I will be filing a police report soon and will be unable to further comment on this issue. I encourage every girl out there who may feel the same way as i do, to please, speak out. Even if my coming out with this leads to being harassed and my safety being compromised, if I give courage to even just ONE other girl to stand up for what is right, this all be worth it. thank you for the support most of you have given me. I hope this step I take will be a step for change.

Kuroe Kun’s post went viral on 25 Jan and garnered over 1000 shares before being deleted over the weekend (27-28 Jan).

The deleted post originally accused a male investigation officer (IO) of turning Lilith away when she tried to make a police report. Kuroe also alleged that the IO blamed Lilith for dressing the way she did.

However, as Lilith put it, “everything she said about Eden is true.”

She corroborated cases made by Kuroe Kun and Dee Kosh, confirming that he did touch her.

Even after she had expressed her non-consent repeatedly, both online and offline.

Lilith also stated her intention to file a police report “soon”, and notes that she will be unable to further comment on the matter after the report is made.

This comes after the Singapore Police Force’s (SPF) statement on Facebook, where they stated that Lilith had said that she “needed time to consider”.

SPF also reportedly requested her to come forward to lodge a report, which had not been forthcoming.

A call to action

Lilith ended her post with a call to action for fellow victims of sexual harassment to speak out and “stand up for what is right”.

I encourage every girl out there who may feel the same way as i do, to please, speak out…if I give courage to even just ONE other girl to stand up for what is right, this all be worth it.

She also stated that although, her public post may lead to “being harassed” and having her “safety…compromised”, she hopes her decision to make her identity public will be a step towards change.

Nonetheless, she has received encouraging responses from netizens and went on to thank her supporters.

To date, thousands of netizens have liked Lilith’s post.

Most of the comments on her post were from supportive well-wishers who have urged her to “stay strong” and that they are “inspired by her bravery”. Sandra Riley Tang, a member of popular local band The Sam Willows has also liked the Instagram post, showing her support for the alleged victim. 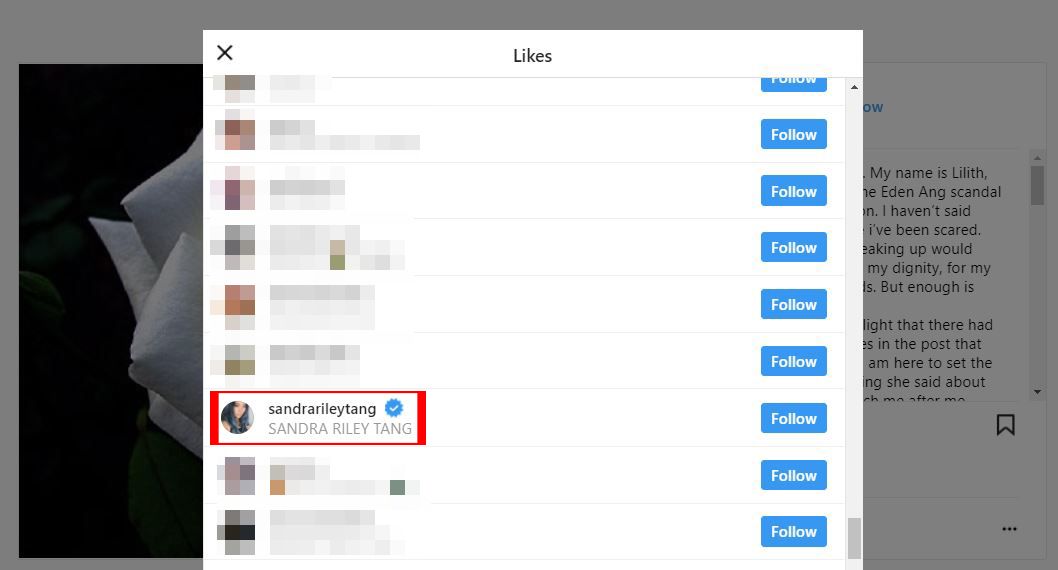 The #MeToo  and #TimesUp movements

The white rose invoked by Lilith, has quickly become a symbol of support for #MeToo and #TimesUp movements on social media.

Simply put, #MeToo and #TimesUp are campaigns inviting victims of sexual assault and harassment to come forth with their stories against their aggressors.

Global stars like Lady Gaga and Kesha were seen donning the white rose on their red carpet outfits, at the recent 2018 Grammy Award Ceremony to symbolise  “hope, peace, sympathy, and resistance”.

Twitter is also awash with hashtags and pictures of the white rose as well, with netizens from China and Korea showing their support for the campaign. 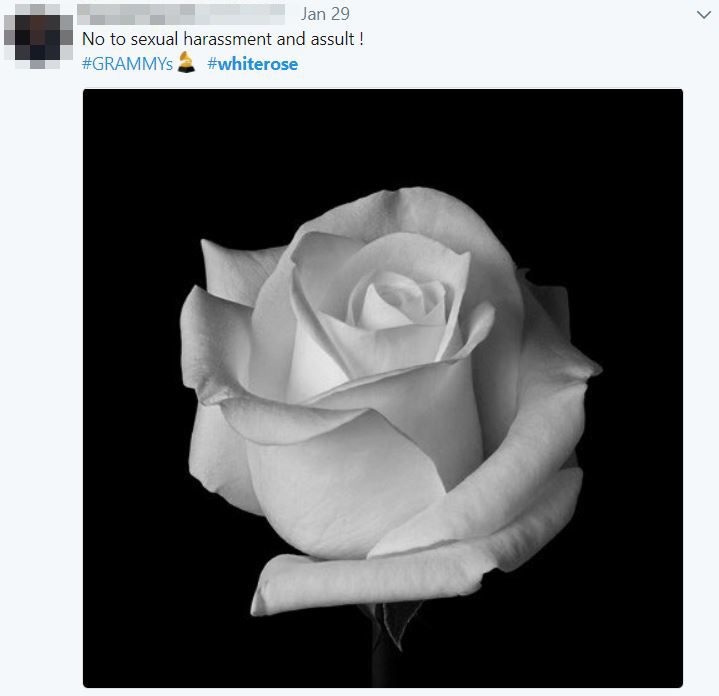 As to whether Lilith’s allegations will result in a similar movement in Singapore, we can’t say for certain as it’s a tad too early to tell.

However, if Lilith is to make a police report as promised in her post, we can probably expect that the truth will indeed come to light soon. 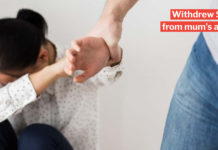 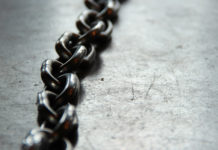