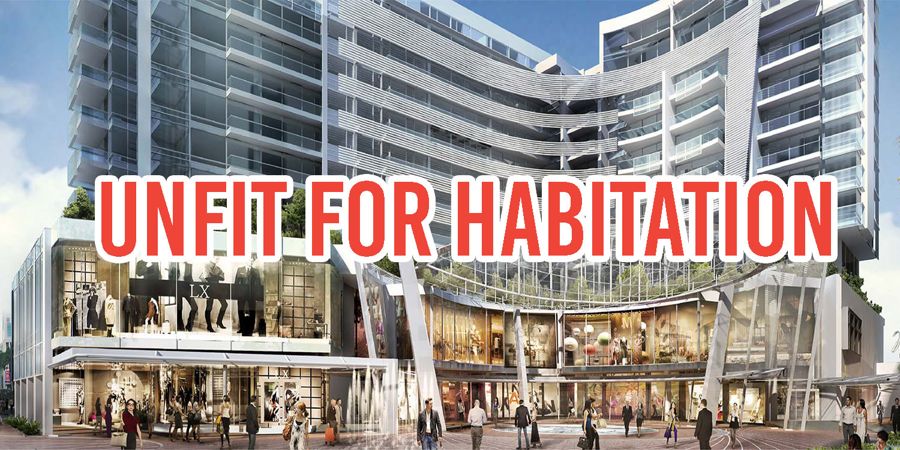 Russian Sergey Vbornov Sues For Refund On $10.5 Million Apartment Which Was “Unfit For Habitation”

What happens you buy something with numerous defects? You ask for a refund. In rich-people-world however, things are better solved in court.

Apparently, upon receiving the keys to his apartment on 31 October 2016, he found the unit “unfit for habitation”. It also did not meet the “promised luxury standard”.

Since gossip is free, we examine just how un-luxurious this apartment is. Because you know, rich people problems.

According to this listing on PropertyGuru, a similar 314 sq m apartment from Eden Residences Capitol is available for sale at a negotiable 10 million dollars.

Eden Residences Capitol is located just behind Capitol Piazza, which means its at a prime location right next to City Hall MRT station, and a few minutes’ walk from Raffles City. At a paltry $10 million, it’s really almost a steal.

If Mr Vbornov’s unit is similar, it probably also has 3 spacious bedrooms and 4 bathrooms. Yes, you read that right. There are bathrooms here bigger than actual rooms in my HDB flat.

From the pictures alone, it’s no surprise that this swanky apartment would be the dream home for the average Singaporean.

However, this was not the case for Mr Vbornov.

Upon collecting his keys in October 2016, he was appalled to find that the “unit has not been constructed to a high standard” or even a “reasonable standard”. Court documents also show that Mr Vbornov hired inspectors who reported “numerous defects”.

His lawyers from Infinitus Law Corporation outlined the alleged defects in 20 pages of claim papers. These included “poor finishing” in the living area and “marked and damaged” air-conditioning compressors in the common rear lobby.

Mr Vbornov also claimed that attempts to rectify the defects have failed due to their inherent nature. Instead of “paradise found” as marketed, it definitely seemed like more of a nightmare for the new home owner.

But wait, Mr Vbornov wasn’t really planning on moving in. Instead, he was looking forward to renting it out for a whopping $25,000 a month. Rather high standards of living, if you get our drift.

To understand Mr Vbornov’s high luxury standards, perhaps we should take a quick look at his background.

He has worked for the Foreign Ministry of the former Soviet Union, and holds dual citizenship in Russia and St Kitts-Nevis in the Caribbean.

From 2007 to 2009, he even had a stint as the ex-chief of Alrosa, Russia’s second-largest diamond producer. Alrosa also happens to be the mine that unearthed a 27.85 carat pink diamond.

Judging by Mr Vbornov’s career trajectory, he is definitely no stranger to living the high life. Evidently, he deserves the better things in life.

In the Capitol’s defense

CRD has struck back at Mr Vbornov’s claim and argues that the apartment was not marketed as a “luxurious apartment” or “paradise found”.

They revealed that repair works were already carried out, after a prior inspection by Mr Vbornov who had complained about the alleged defects. They then attempted to rectify them from March to October 2016 based on Mr Vbornov’s feedback.

However, CRD stressed that the extra work was done was simply out of “goodwill” and did not mean that they admitted liability. They hereby reject all claims that any part of the unit’s construction was unacceptable.

Since Mr Vbornov took possession of the unit in October 2016, CRD has not been able to access the apartment to carry out rectifications or verify the defects.

Mr Vbornov is looking at the full return of monies paid for the apartment in his lawsuit against CRD. This includes 8.89 million of the sale price, 1.88 million in stamp duties and conveyancing fees of $6,857, as reported by The New Paper.

The full list of the apartment qualities under contention by Mr Vbornov include, “operation, longevity, appearance, construction, weather tightness, safety, present and potential failure, and lifespan”.

Once brought to court, this has the potential of being the biggest private lawsuit over housing defects in Singapore.

A High Court pre-trial conference was held recently and the case is expected to go to trial next year.

Paradise is a state of mind

For most Singaporeans, securing a regular HDB flat from recently launched BTO schemes would already be a cause for celebration.

For some of the lucky ones however, more pressing issues are in order. Like being unable to turn a $25,000 per month rental dream into a reality, or stressing over the damaged air-con units in the common rear lobby.

Guess most of us will have to stick to our humble void decks then. Not everyone can afford to buy paradise, but we can still enjoy living with our families no matter where we call home.

At the very least, we won’t have to worry about rich people problems.