Must Share News – Independent News For Singaporeans
Home Current Affairs Ex-NTUC President Finally Turns Up In Court, After Over 30 Years On... 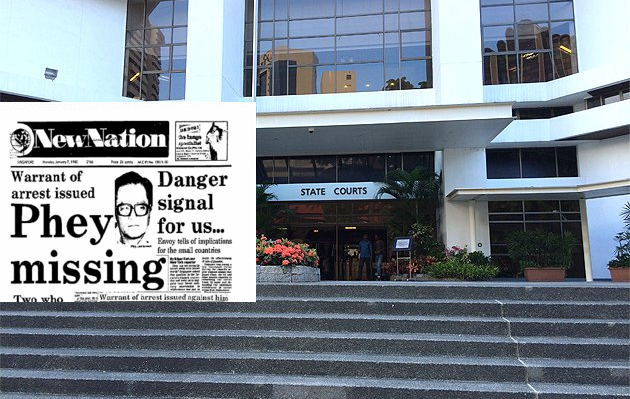 He was probably tired of the hide and seek game

After 36 years on the run, the former National Trades Union Congress (NTUC) president, Phey Yew Kok finally gave up hiding and surrendered himself.

Phey was charged with six criminal counts in 1979 when he jumped bail and caused his two bailers to lost their deposit amounting up to SGD$95,000.

Investigations from the Corrupt Practices Investigation Bureau (CPIB) revealed that Phey absconded to Kuala Lumpur by train and proceeded to Bangkok where he disappeared.

36 years later, the CPIB confirmed that Phey had surrendered himself at the Singapore Embassy in Bangkok 2 days ago (22 June).

Phey, now 81 years young, is now back to face the charges.

What Is He Charged With?

Phey was reportedly charged with four counts of criminal breach of trust of $82,520. He was also slapped with two charges under the Trade Unions Act, for investing up to $18,000 of trade union money in a private supermarket without ministerial approval.

The State Courts have decided that the charges will still stand and further investigations will begin.

Additional charges may also be given.

If Phey is found guilty for criminal breach of trust as a public servant, he may be looking at a jail term of up to 15 years and a fine.

Prime Minister Lee Hsien Loong weighed in that Phey Yew Kok will be dealt with by that law, adding that Phey turning himself in will provide us with a closure.

Phey Yew Kok was facing charges of Criminal Breach of Trust when he absconded while on bail in 1980. He has now turned himself in and returned to Singapore.

He has been charged in court, and the law will have to take its course. This will bring closure to a long outstanding case involving a person who was holding public office as an MP and a senior union leader.

The NTUC acknowledged the surrender of Mr Phey and added that the law do its job.

We must now let the law take its course.

Mr Phey is reportedly now so old that he requested the charges to be read out to him slowly because he was hard of hearing. Phey, however does not seem to be repentant over his charges.

If my memory still does not fail me, I don’t think the money was transferred to my personal account.

One question still remains on most of our minds after reading this story – Why did he surrender?

Why Did He Surrender?

We can’t confirm his true motivations, but we can certainly speculate on some possible explanations.

Maybe he wanted closure after 36 years of absconding from authorities in Singapore.

Maybe going to jail was the last thing he had to tick off in his list of “101 Things To Do Before I Die”.

Maybe he misses eating his favourite chicken rice that just could not be replicated in Bangkok.

Or maybe, just maybe he was visited by a certain someone.