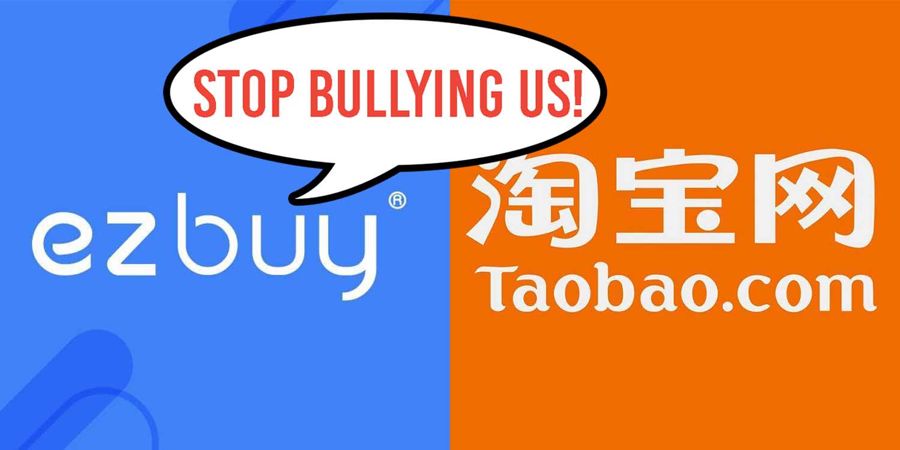 Ezbuy just can’t seem to catch a break. On Singles’ Day (11 Nov), they experienced troubles in fulfilling customers’ purchases through their Buy-For-Me service. Troubles to the tune of an estimated 30,000 orders.

Taobao countered and accused Ezbuy of ‘scalping’, or profiteering from the premiums Ezbuy charges for their ‘Buy-For-Me’ service.

In lieu of the fallout, could this possibly spell the end for Ezbuy’s operations?

We explore both sides of the debate and how this may affect all you passionate online shoppers.

Ezbuy is a third-party agent that buys products from Taobao – the largest Chinese e-retailer. The goods are then shipped from their warehouse in China to customers in Singapore.

As Taobao does not offer English translations, Ezbuy’s English interface and translated descriptions of Taobao products typically add value to the online shopping experience of many Singaporeans.

Since Ezbuy had their roots as a simple ‘daigou‘ or ‘buying on behalf of’, purely for bringing Taobao products to Singapore, there wasn’t much of an issue at first.

But this relationship quickly took a turn for the worse, once Ezbuy’s ‘Buy-For-Me’ service came into the picture.

Products are then shipped to a warehouse in China that is owned or rented by Ezbuy, allowing the customer enjoy savings due to free domestic shipping.

Ezbuy then inspects, repacks and consolidates the purchases and ships them out to Singapore. Of course, Ezbuy profits from charging an agent fee, as well as a favourable exchange rate for themselves.

Taobao was gradually became unhappy with this arrangement as this meant sharing a slice of their shipping profits with Ezbuy.

Is Ezbuy guilty of ‘scalping’?

Ezbuy’s troubles began when they realised that most of their purchasing accounts were being continuously suspended by Taobao. Ezbuy was thus unable to make purchases on behalf of numerous customers in Singapore.

On the 8th, Ezbuy’s founder He Jian, posted an open letter. In it, he aired his grievances and accused Taobao of bullying the smaller company. The total number of suspended accounts purportedly exceeded 1,000.

However, Alibaba – the parent company of Taobao – swiftly fired back, by saying that Ezbuy’s act of creating accounts to buy and resell items was an act of scalping. Taobao had apparently tolerated Ezbuy’s alleged scalping behavior but could not allow it any longer.

Curiously, the exact period Taobao decided to take preventive action also happened to be the biggest e-commerce day of the year.

Why did Taobao choose to suspend Ezbuy’s accounts?

How did we get to a point where a Fortune 500 corporation, deemed it necessary to disrupt the business of a comparatively small company from Singapore?

Well, if we look back in history and examine the Alibaba group’s actions, the answer may become clearer.

The Alibaba group had chosen Lazada as their vessel of choice to expand into Southeast Asia, pumping in S$1 billion into the company not just once, but twice.

They now own an astonishing 83% stake in the e-commerce firm. This partnership was cemented with the unveiling of taobao.lazada.sg, which offers a similar service to Ezbuy’s offerings.

This was a clear signal of the Alibaba group’s intent. Even after offering direct shipping to Singapore, Ezbuy’s native English interface and sheer convenience factor proved to be an irresistible combination.

Logically speaking, suspending Ezbuy’s purchasing accounts could be Alibaba’s latest move to ensure that their golden boy comes out on top.

How will Ezbuy and Taobao’s damaged relationship affect me?

Online shoppers, you’ll definitely want to note this down.

Ezbuy may well be living their worst nightmare now if they cannot find a solution to this feud with Taobao.

But if you’re seeking other options for similar services that have yet to catch the ire of Taobao, consider these alternatives.

SGshop, Peeka and Oops are other third party agents that have eagerly scooped up the market share lost by Ezbuy in recent weeks.

There’s only one thing for certain. Ezbuy will have to take steps to lessen their dependence on Taobao, for it’s getting tougher to compete with the titans of the industry.

After all, a middleman’s worst fear is that the seller decides to bypass them and go straight to the buyers.

Perhaps an alliance with a certain American company that gets its name from a rainforest in Brazil may be on the books?

Featured image from Taobao and Ezbuy.