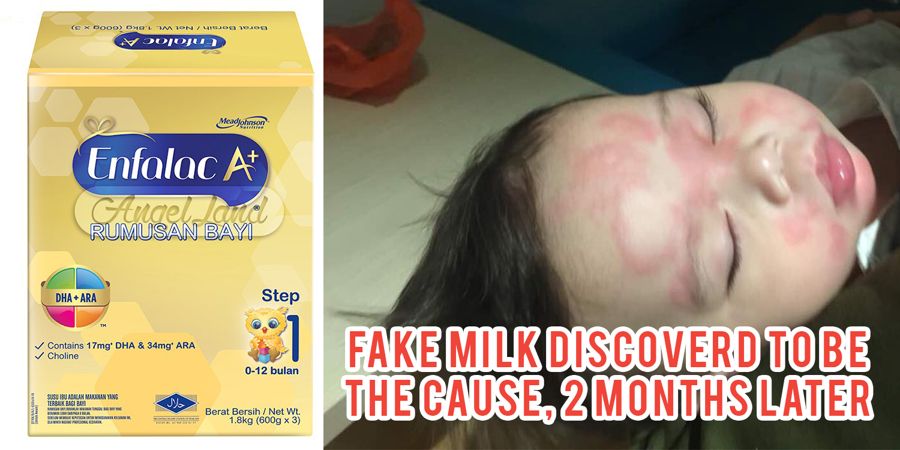 Malaysian Baby Hospitalised, Fake Milk Powder Revealed To Be The Cause 2 Months Later

Remember when we reported about how Singaporeans should be wary about buying milk powder in Johor Bahru? Well, it seems that the spread of the fake milk powder is deeper than we first anticipated.

This revelation comes after a Malaysian mother who resides in Petaling Jaya near Kuala Lumpur spoke up about how the fake Enfalac A+ milk powder caused her son to be hospitalised.

While watching your child suffer causes enough pain for most parents, Ms Seila Nawi was made to endure more emotional turmoil.

The reason? Not knowing why baby Mikael was suffering for nearly 2 months.

Found out only after Malaysian media reported product seizures

In a Facebook post on 11 Dec, Ms Seila Nawi shared that it was only recently that she discovered the cause of her son’s earlier hospitalization.

On 10 Dec, the Malaysian National News Agency (BERNAMA) published an article which reported that the Ministry of Domestic Trade, Cooperatives and Consumerism (KPDNKK) had seized 210 boxes of infant formula that were believed to be fake.

The raid on several shops was a result of a “report regarding a baby who suffered severe vomiting after taking an infant formula which was later found to be fake”.

While the report generated awareness for readers, it served a different purpose for Ms Seila. You see, Mikael was fed Enfalac A+ at home.

If you put two and two together, well you get what we are driving at.

In her post, the mother shared that the article was a godsend as it finally provided her with an explanation on her son’s hospitalisation two months ago.

Rashes, fever and other s…stuff

Ms Seila explained that in Oct 2017, her son Mikael was warded for nearly 2 weeks in hospital. Although doctors conducted many tests on the baby, they were not able to accurately determine the cause of Mikael’s illness, other then attributing it to food poisoning.

Mikael’s illness began after he vomited 9 times in a day.

If that was not bad enough, baby Mikael also developed a fever and rashes all over his body that afternoon.

Ms Seila decided against bringing Mikael to the doctor immediately, choosing to give him a cold shower to bring the temperature down. However, around 3pm, Mikael had become so weak and did not want to drink his milk.

It was then that Ms Seila decided to bring her son to the hospital.

Doctor unable to diagnose the illness

After clarifying if Mikael had not eaten any solid food or anything that was out of the norm, doctors at the hospital decided to place the baby on a drip and to keep him warded until they could diagnose his illness.

Ms Seila was told to avoid feeding Mikael any solid food as the doctor had suspected that the baby was allergic to some types of food. He was instead put on a drip and fed milk.

Guess which brand he was fed? That’s right Enfalac A+. Although we are unable to confirm if the milk powder was Ms Seila’s own or the hospital’s, things took a turn for the worse.

The day after being admitted into hospital, Mikael began to have diarrhoea.

His stools was subjected to one of the numerous tests to check if the baby had any allergies. However, results from the test showed that Mikael did not have any allergies.

It gets even worse. A week after hospitalisation, Mikael started to have blood in his stools.

This was particularly painful for for Ms Seila as she had to administer the antibiotics to the baby.

Despite staying in hospital for two weeks, doctors were still unable to diagnose the illness that plagued Mikael.

While in hospital, Mikael’s rash and fever fluctuated. However, his health slowly returned towards the end of his second week in hospital.

Seeing that her son was slightly more active, Ms Seila requested to bring her son home.

Mikael’s health continued to improve back at home. However, this could have been because Ms Seila had finished the old can of fake milk powder and was feeding her son from a new can.

A warning to parents

After discovering that the Enfalac A+ milk powder that she had fed her son could have been the fake one, Ms Seila made a police report and is currently working MeadJohnson and the police to crack down on such suppliers.

The Malaysian mother cautioned other parents who use the same brand, urging them to purchase the powder from reputable places such as AEON and Tesco malls instead of pharmacies or smaller shops.

She also encouraged parents to immediately bring their children to the hospital if they displayed similar signs of illness as Mikael.

Mead Johnson Nutrients Malaysia, which distributes Enfalac A+, issued a warning on their Facebook page warning customers of the fake milk products and teaching them how to spot the difference.

If you see that there is a crease on the side of the packaging or if the packet is not fluffy, there is a chance that you might have encountered a fake bag of formula. The milk formula supplier also warned customers that the fake formula is generally found in 1.8 kg products.

In the event customers have encountered a potentially fake product, customers can contact the company’s consumer care hotline and receive a product replacement.

While it has been nearly two months since Mikael has been discharged, Ms Seila shared that she suspects that the active ingredient which cause her son to be ill has not completely left his body yet.

She hopes that no other parent would have to go through her ordeal.

We would like to wish baby Mikael a speedy recovery and remind all Singaporeans to be vigilant when buying the product from Malaysia.