Must Share News – Independent News For Singaporeans
Home News People Actually Talked About Amoeba & Being ‘Sexy’ At The First Anti-Fake... 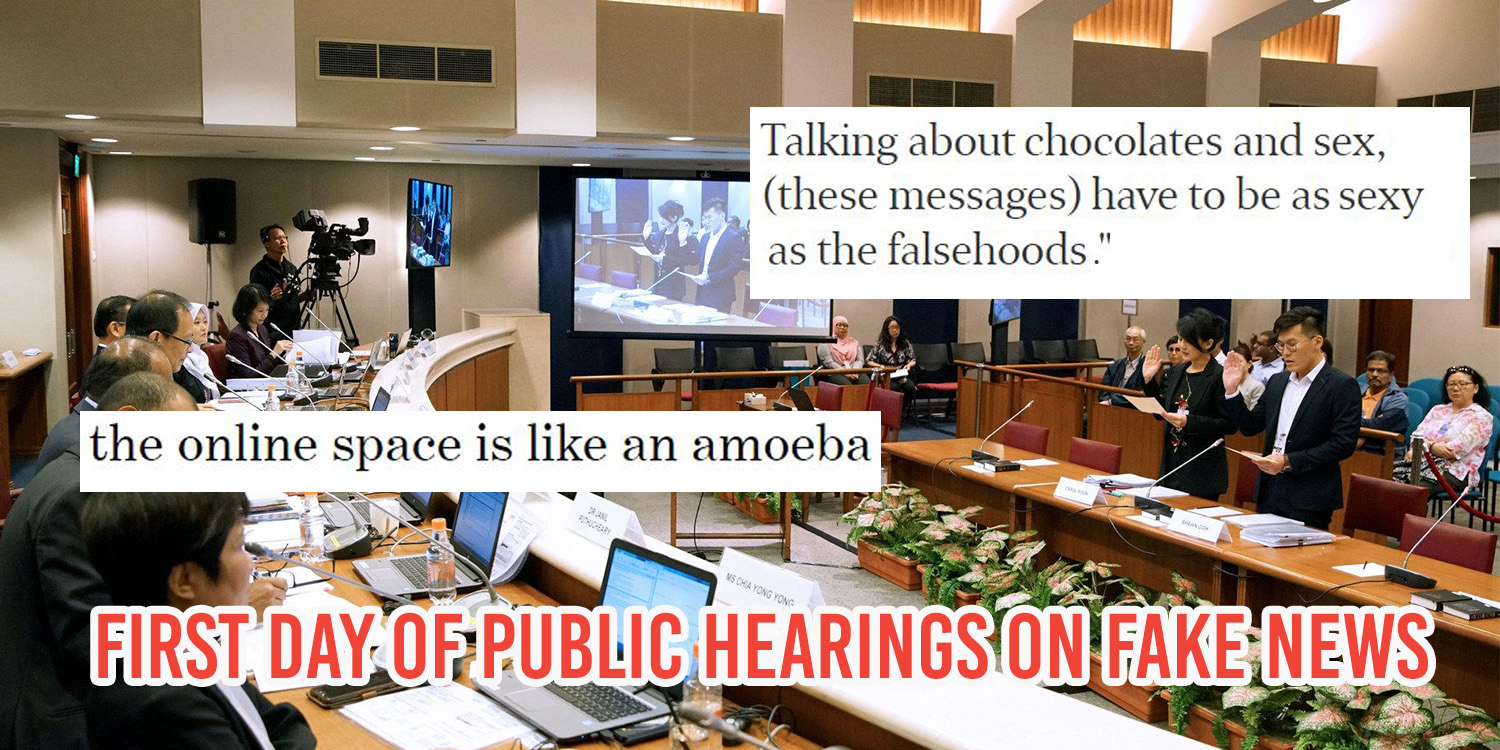 Hopefully we’re done with saying sorry, because there are more pertinent issues to tackle.

The Select Committee On Deliberate Online Falsehoods convened for the first time on Wednesday (14 Jan) to discuss and debate all things fake news. 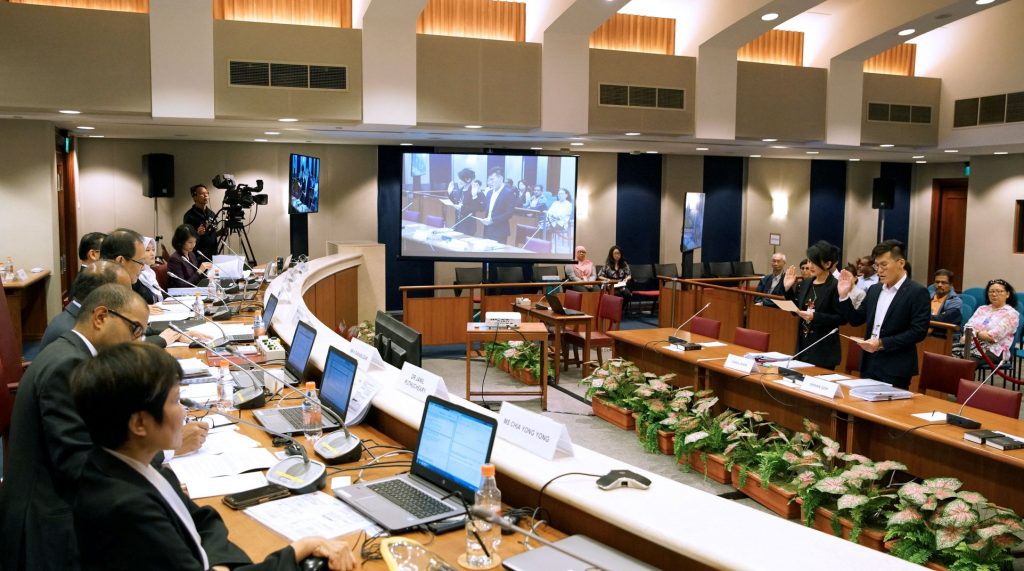 The first day of debates saw many high-powered minds express their views on fake news. Naturally, this has resulted in a veritable well of quotable quotes.

Here are some of the best lines the hearing produced.

1. “I don’t see how truth can compete with alcohol, opiate, or love, or sex or chocolate” – K Shanmugam

Wait, but isn’t Mr Shanmugam is the Law Minister of Singapore?

Yes, he said that. Yes, he was joking. And according to The Straits Times, he did it with a slight chuckle.

Mr Shanmugam was citing a 2017 report from the Institute of Policy Studies, which claimed that,

…individuals get a rush of dopamine when they find confirming data similar to when they eat chocolate, have sex or fall in love.

This means that when people uncover their own perceived truths, they may feel a pleasurable rush similar to falling in love.

Due to this phenomenon, the report suggests that “people tend to focus on information that supports their confirmation”, and may eventually seek out online falsehoods.

It also found that most people actually prefer “alcohol and sex“.

The report was certainly food for thought for Mr Shanmugam. 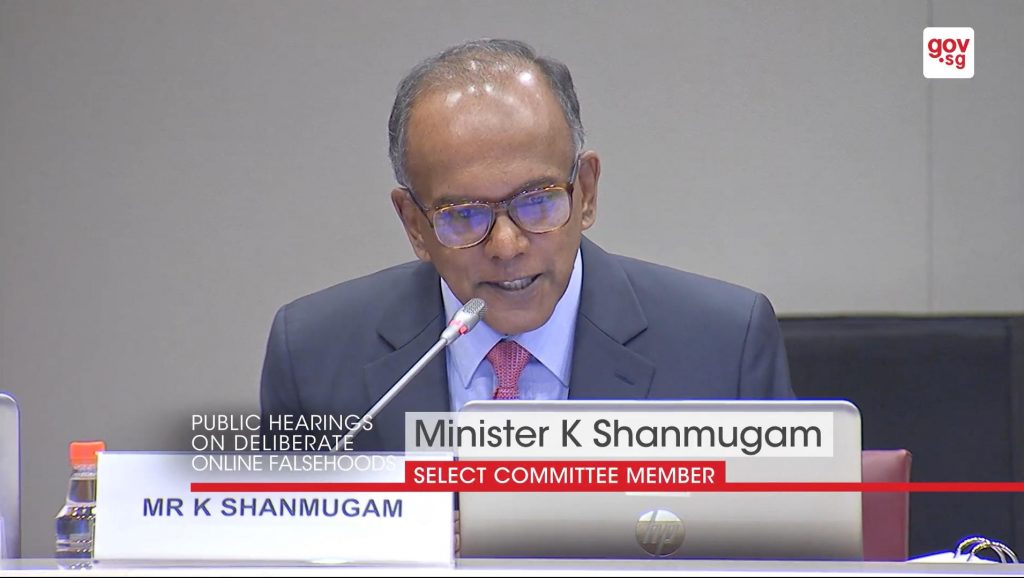 He also said that attempts to debunk or disprove falsehoods may sometimes have the opposite effect.

So how exactly do you go about combating this threat?

The next speaker, Dr Carol Soon, may have the answer to this hard question. Saying that you have to “market the truth”, she said that “The devil is in the details”.

2. “Talking about chocolates and sex, (these messages) have to be as sexy as the falsehoods” – Carol Soon

While we’re on the topic of romance, let’s light the candles and put on some smooth jazz, because we don’t just have to debunk online falsehoods.

We have to seduce those who subscribe to them. All in the name of bringing them back to the side of truth, of course.

And that hit of dopamine. Oh, sweet dopamine. 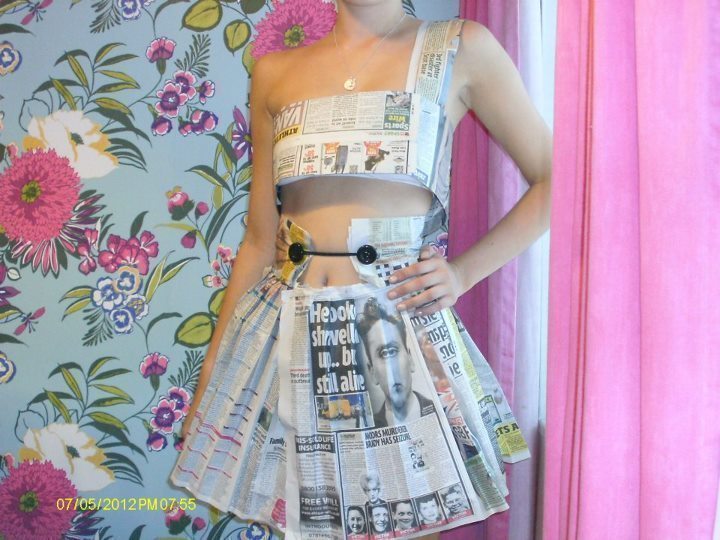 3. “The online space is like an amoeba” – Carol Soon & Shawn Goh

Dr Soon and Mr Goh are Senior Research Fellow and Research Assistant respectively, from the Institute of Policy Studies.

The amoeba is a cellular organism that is able to alter its shape by doing some complicated biological thingamajig.

Therefore, it is the perfect metaphor to describe the Internet.

The duo from IPS stated that legislation will always be one step behind the ever-changing nature of the web.

This, we have to be “precise and specific” in the types of fake news that legal action should be taken against. 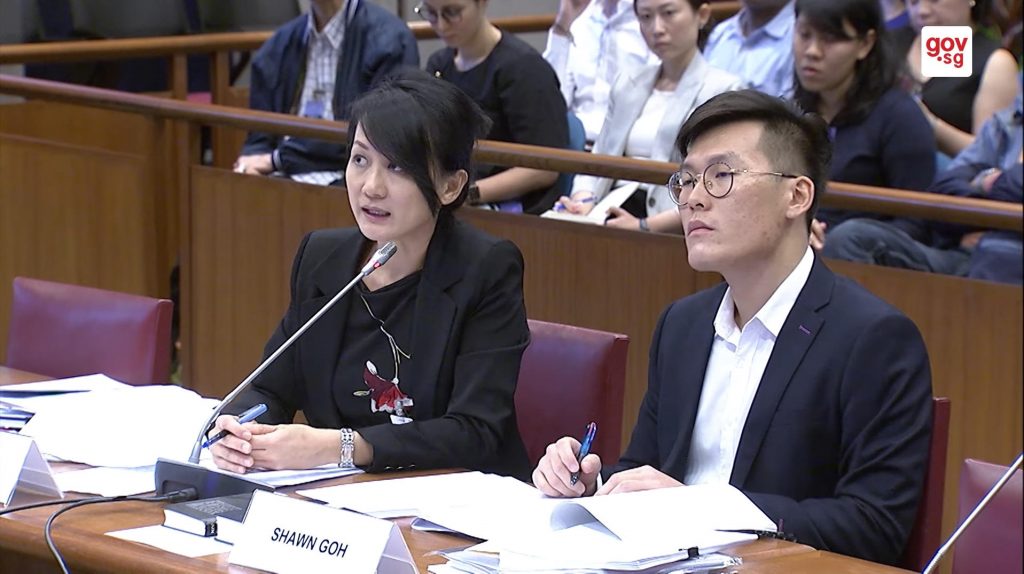 Mr Raska put forth his opinion that organised campaigns aimed at spreading disinformation could make Singapore “particularly vulnerable”, despite the substantial military power we’re painstakingly built up over the years.

Although our conventional defence capabilities are “second to none in the region”, Mr Raska’s opinions prompted Mr Shanmugam to muse on how attractive Singapore may pose to a country that “feels it is not militarily able to challenge Singapore”. 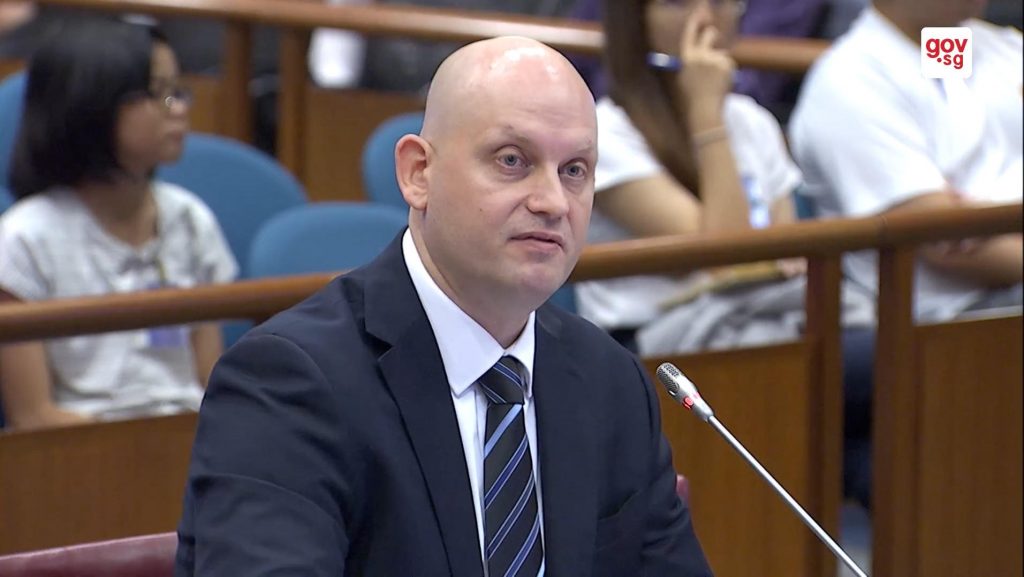 5. “It is very difficult to spot manufactured stories that…change perceptions on particular issues. These are very, very subtle” – Raska

Mr Raska very succinctly highlighted the difficulty that Governments all around the world are coming to realise — that we may not even know that we are under threat.

“Information attack” can be carried out with the aim of creating divisions in society, and are “very, very subtle”.

6. “Effective use of social media in conflicts will become as important as winning the military campaign” – Raska

Given that Mr Raska’s ‘Written Representation’ submitted to Parliament is 23 pages long, it comes as no surprise that he takes up three spots on this list.

Another point that he touched upon was how social media has become a launching platform for seeding ideas and the delivery of tailored information campaigns.

These come with an ulterior motive of influencing perceptions of events or the environment in real time.

Prof Raska said that social media has already been utilised as a means to such ends, with the Russians’ concept of New Generation Warfare. 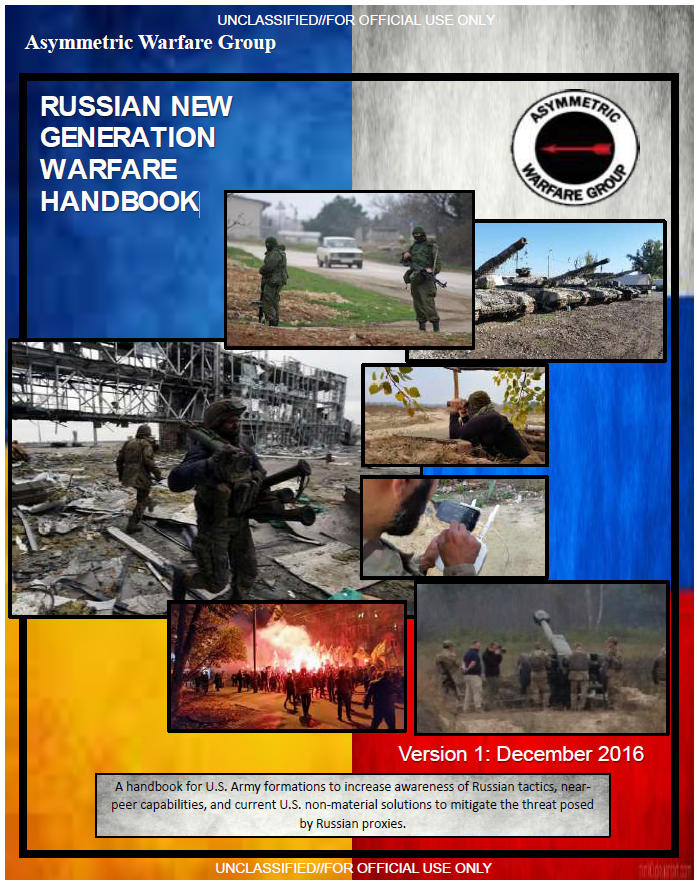 7. “If religion in a general context is introduced…that would be absolutely helpful for the students” – Andre Ahchak

Mr Ahchak is the Director of Communications at the Roman Catholic Archdiocese.

Mr Ahchak, along with representatives from Christian and Buddhist religious groups, called for greater education, especially for young Singaporeans, to debunk myths about respective religions.

He argues that such a move will allow students to learn both religion and culture. The vast richness of such culture can bring “bountiful” benefits to all of society.

8. “I’ve looked at the existing legislation and submitted they are not sufficient to deal with the problem” –  Goh Yihan

Mr Goh pointed to currently existing legislation such as the Sedition Act, Protection from Harassment Act and Telecommunications Act.

Although they could apply to cases of online falsehoods, they are currently limited in speed, scope and adaptability, according to Mr Goh.

He agreed with Marine Parade MP Edwin Tong, who said that while some laws deal with spreaders of fake news, the falsehoods remain free to circulate online.

This leaves no means of ensuring that readers of the falsehoods are alerted of the true facts, the academic asserted. 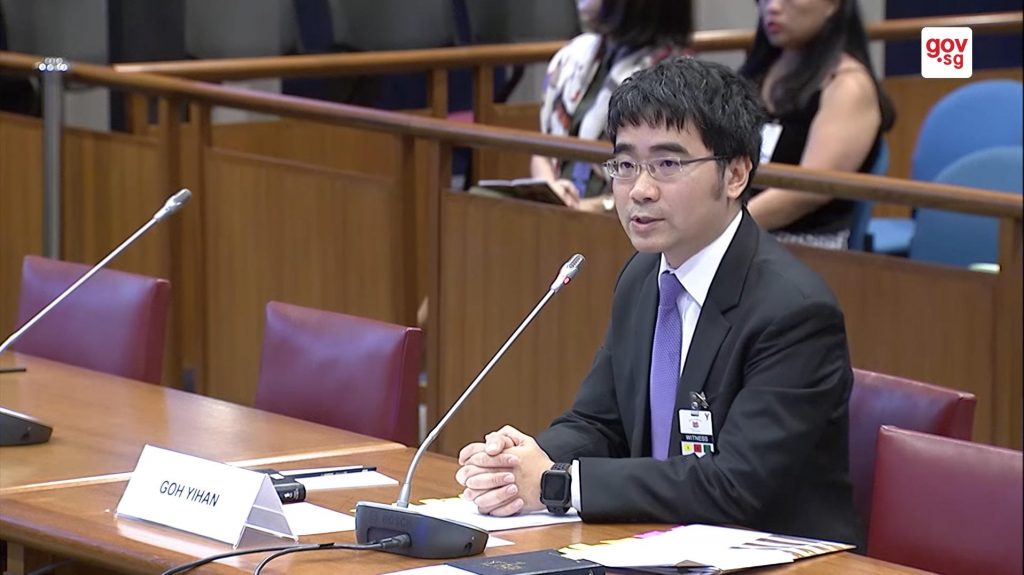 9. “The truth limps behind slowly and does not quite eradicate the original false impression” – K Shanmugam

Mr Shanmugam shared a quip that perhaps best typified the far-reaching extent of the damage that fake news can cause.

He reasoned that although the truth may come out in the aftermath of fake news, it may not change the false impressions the online falsehoods have already created.

Those who tuned into proceedings today might have been disappointed at the lack of substantial progress in terms of affirmative action being taken.

But worry not, there are many more hearings lined up.

Maybe we’ll hear more in the way of solutions then.

Featured image from Parliament of Singapore.