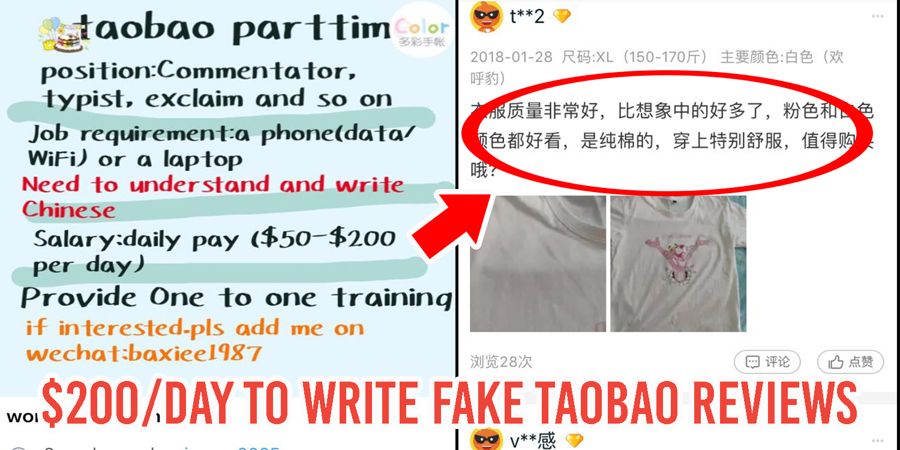 Fake Taobao Reviews Are Rampant, And See How Easy It Is To Join

They always say read the comments before you buy anything online.

This adage comes in handy especially since it’s almost impossible to know the quality of the product before buying it.

But what if we told you that those rave reviews you see on popular online shopping sites like Taobao are actually fake?

Unscrupulous merchants dictate what’s written in reviews and even buy their own products for fake reviewers.

We’ve uncovered an entire syndicate that’s dedicated to the operation – from online recruitment to daily bank transfers of wages – right here in Singapore.

We contacted the job agent on the pretext of finding out more about the job scope. And to check if this dodgy operation is even legal.

We found a job opening on Carousell in search of people who could speak Chinese and wanted to earn a quick buck.

They included a WeChat username in the advertisement, and instructed interested parties to message them. The agents, who call themselves a ‘Part-time Consulting Network’, introduced us to a range of possible jobs. 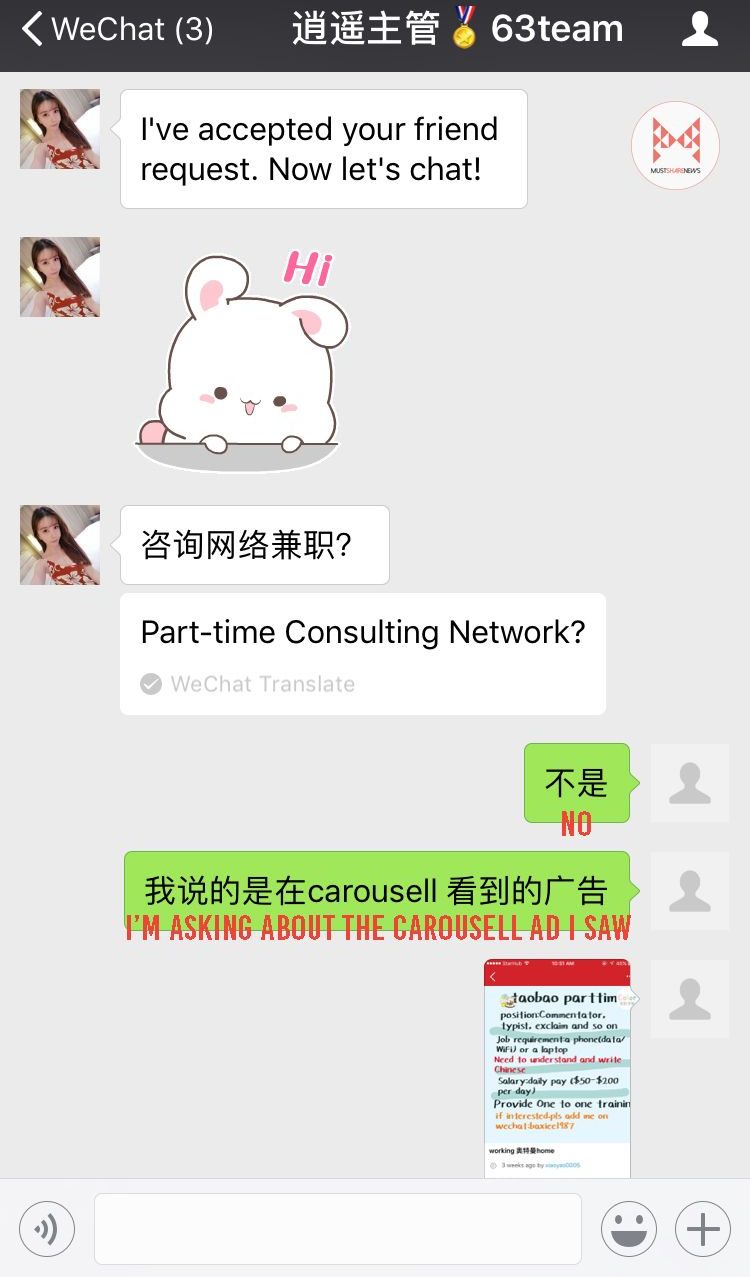 We expressed interest in the job of a typist/commentator or 网购体验员 —  loosely translated as ‘Purchase Experience Reviewer”.

She went on to clarify that other jobs are available for us to choose from, again. We explained that we were not aware about the other jobs, but wished to know what the job scope was for the reviewer position.

She then sent us a series of detailed screenshots with further instructions. 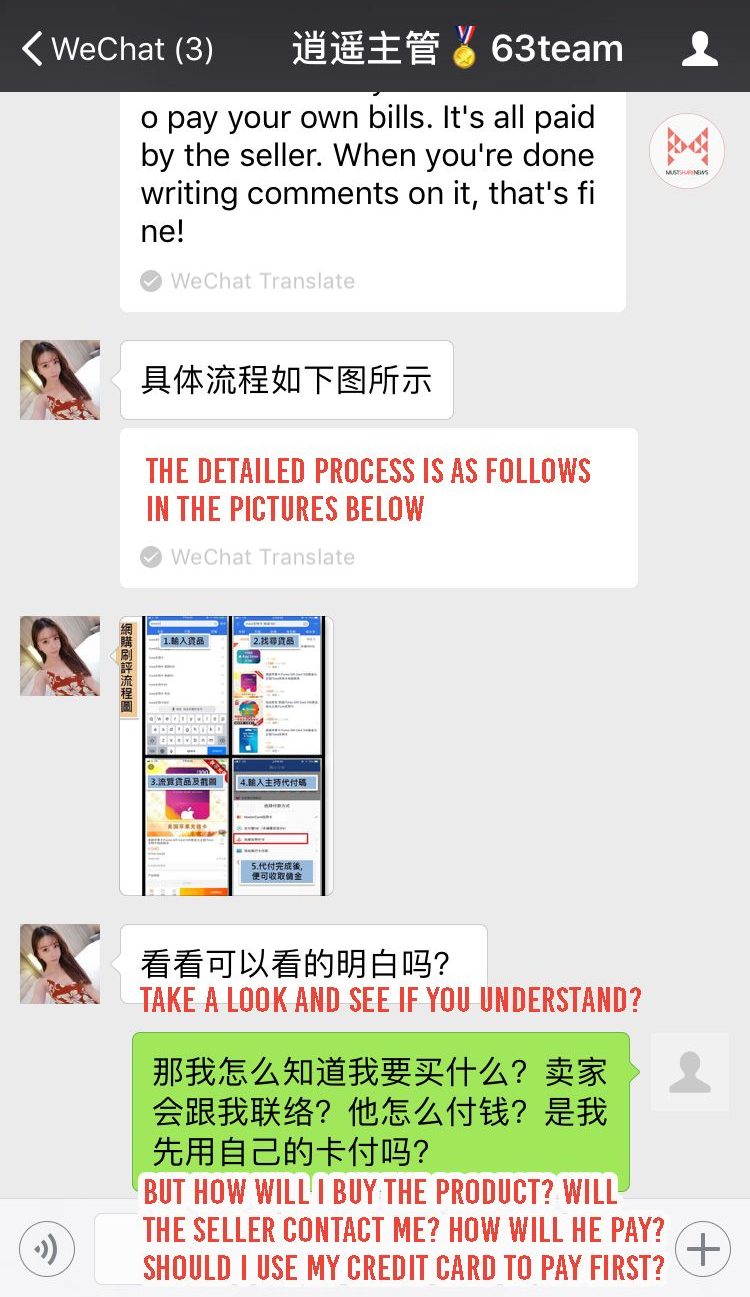 She even taught us on how to place the order for the products, in a detailed step-by-step guide, including pictures. 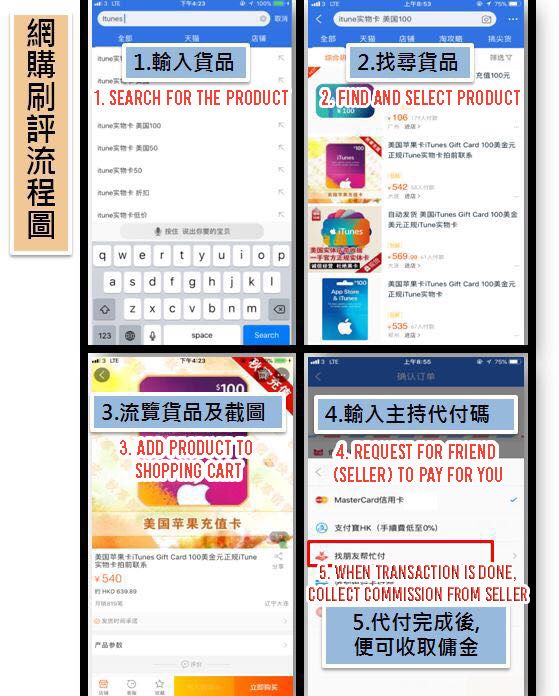 Instead of actually paying for the product, we were supposed to bill it to the seller. After the seller makes the payment, we would be allowed to comment on the product. 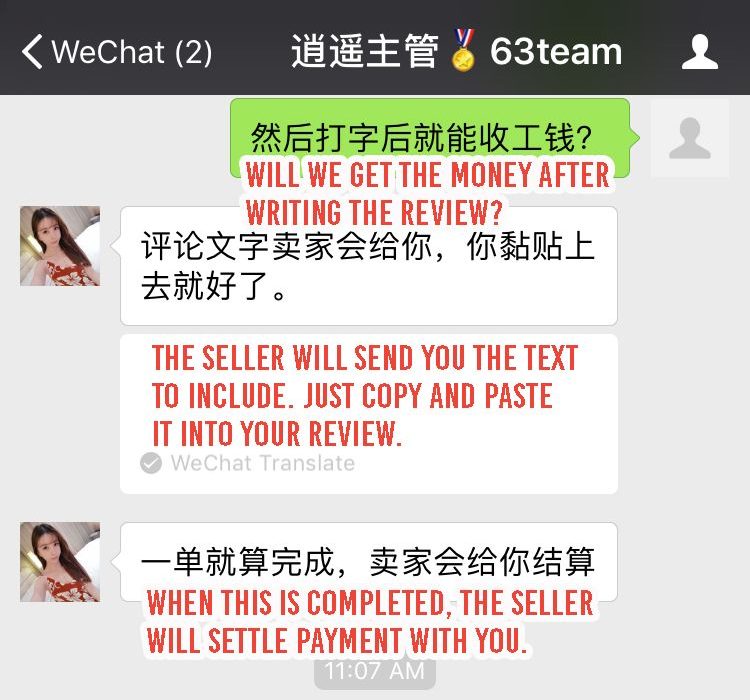 She said that the seller would let us – the reviewers – know what to include in the post.

All we had to do was to ‘copy and paste’ the necessary text into our reviews.

When the deed was done, sellers would settle payment with with us, including the price of the product. 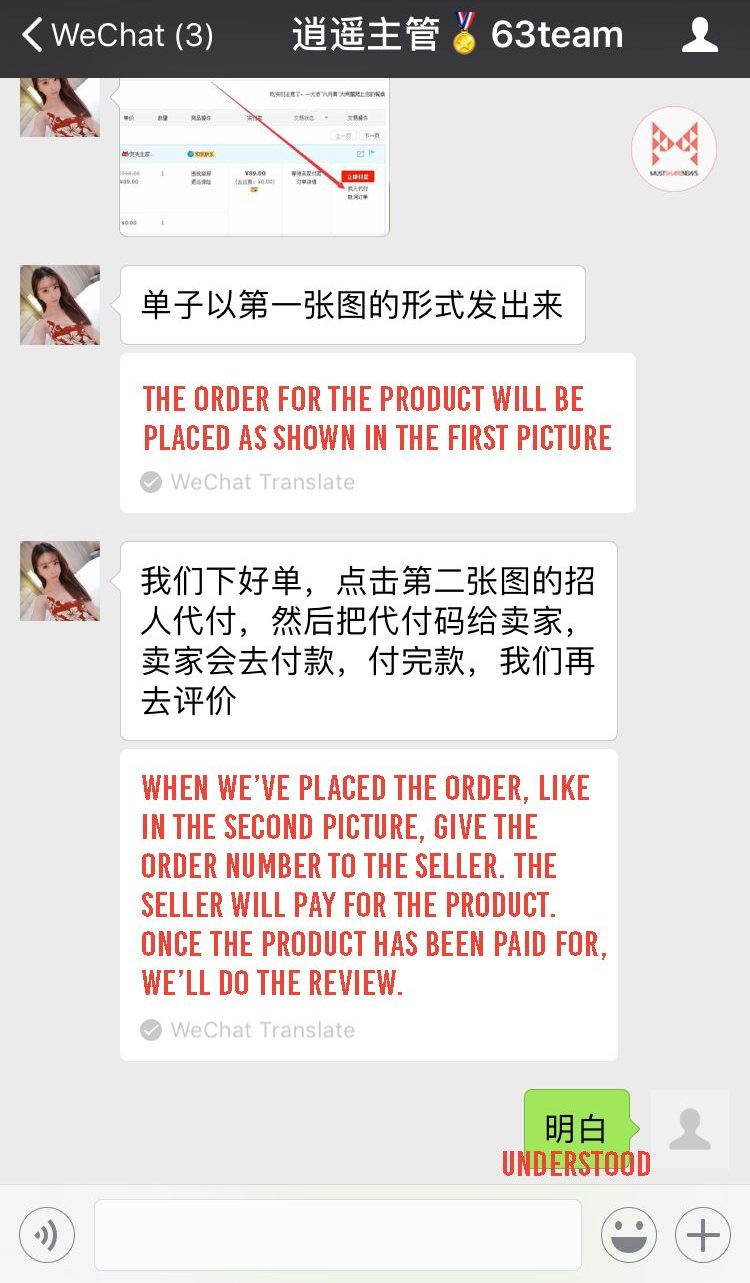 If all goes well, the reviewer would not actually have to pay for the product at all. All costs will be borne by the seller.

In summary, a ‘Purchase Experience Reviewer’ has to complete the following things before getting paid:

Completion of one list earns you a commission of S$1-10 , depending on the number of items.

There’s a whole other list of at least 8 other kinds of jobs, including a typist, brand ambassador and preferably female chatroom hosts. 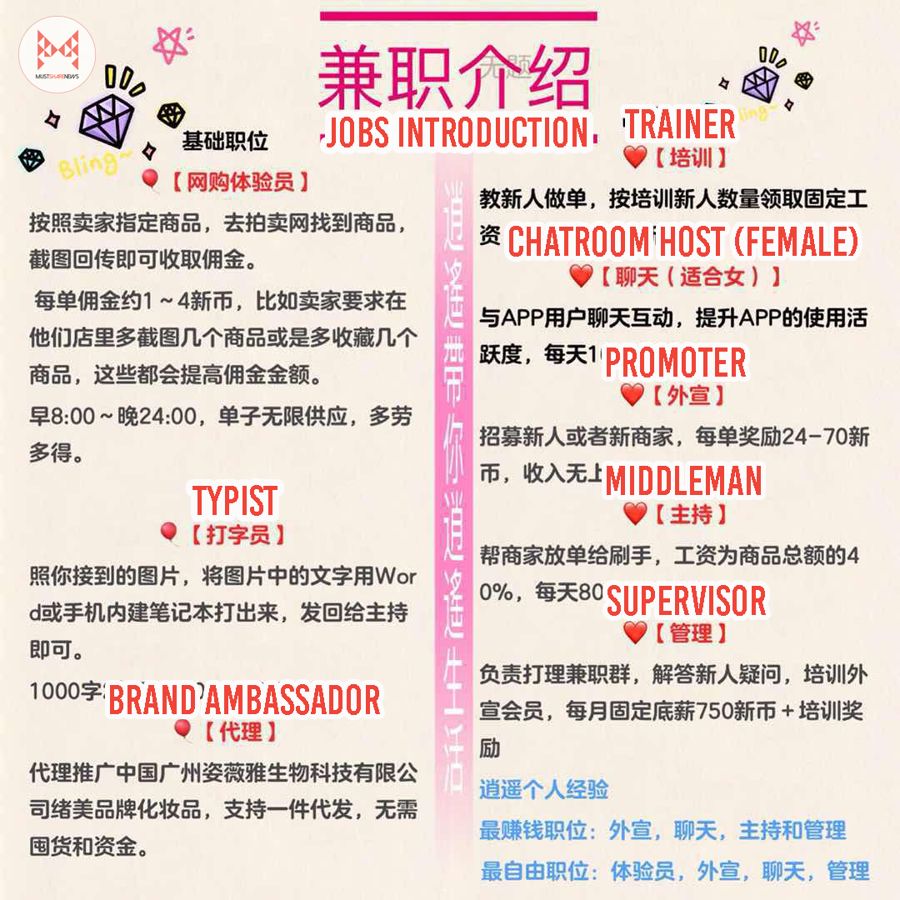 The amount of commission varies based on the job. You can expect to earn from S$80-400 per day as a middleman buyer, or S$750 per month as a supervisor who focuses on training new employees. Best of all, there are tons of Singaporeans who are already doing this as a side lobang, according to this agent at least.

It’s not cheating if everyone does it

When I asked the job poster if creating fake reviews is equivalent to cheating consumers, she did not hesitate to deny this was so. 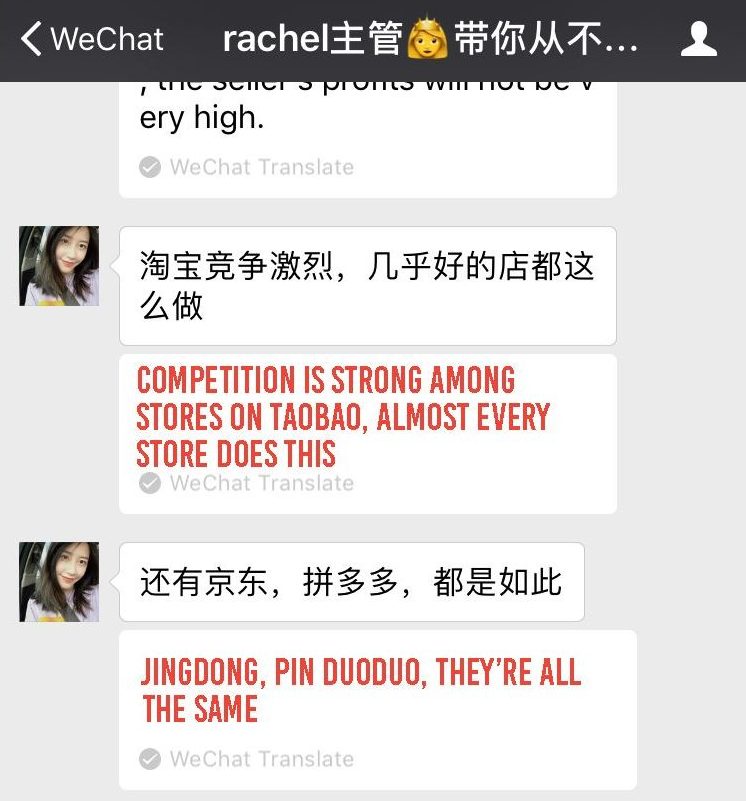 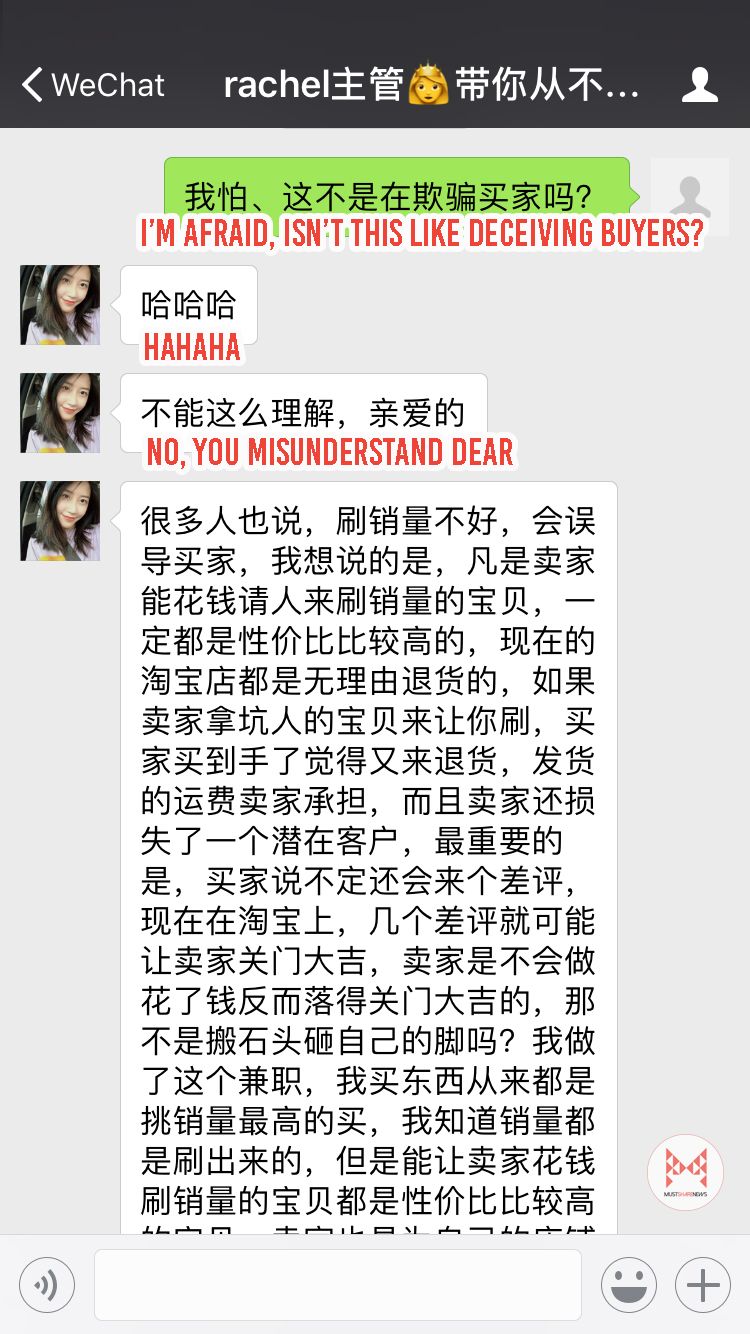 Because she came up with a whole list of excuses to justify the practice.

In the conversation, the agent even argues that only merchants with good quality products will be willing to pay for fake reviews.

The agent insisted that they aren’t cheating consumers, as long as buyers chose reputable merchants who sell quality products.

Also, positive reviews generate buzz for their products, which allows shops to be featured on the trending page, resulting in more sales.

Sellers reason that they’re just drumming up publicity for their shops.

As we all know, if a bargain is too good to be true, it’s probably not.

The moment we expressed interest in the job, she unveiled yet another tantalising caveat to this offer: newcomers have to pay to start earning money. 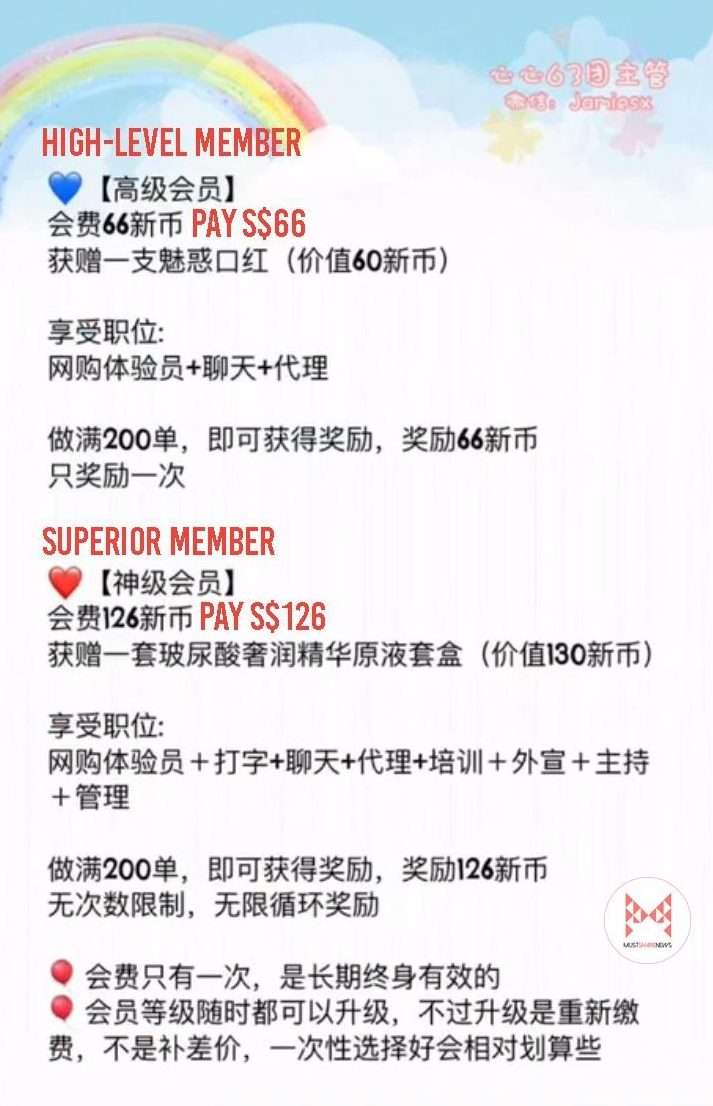 You’d have to pay a deposit of S$66 in order to join the pool of workers as a ‘high-level’ (Gao Ji) member.

As a high-level member, you’ll get to try out jobs like chatting with other people and acting as a brand ambassador that sells electronics, earning up to S$10-30 hourly.

To be a ‘superior’ member (Shen Ji) and enjoy access to all the higher paying jobs, a fee of S$126 is charged.

Key jobs include managing the recruits and answering queries from individuals who show interest. The pay is S$750 weekly, and a performance bonus can be expected as well.

Upon entry, all newcomers receive a free gift — a makeup kit worth up to S$60. 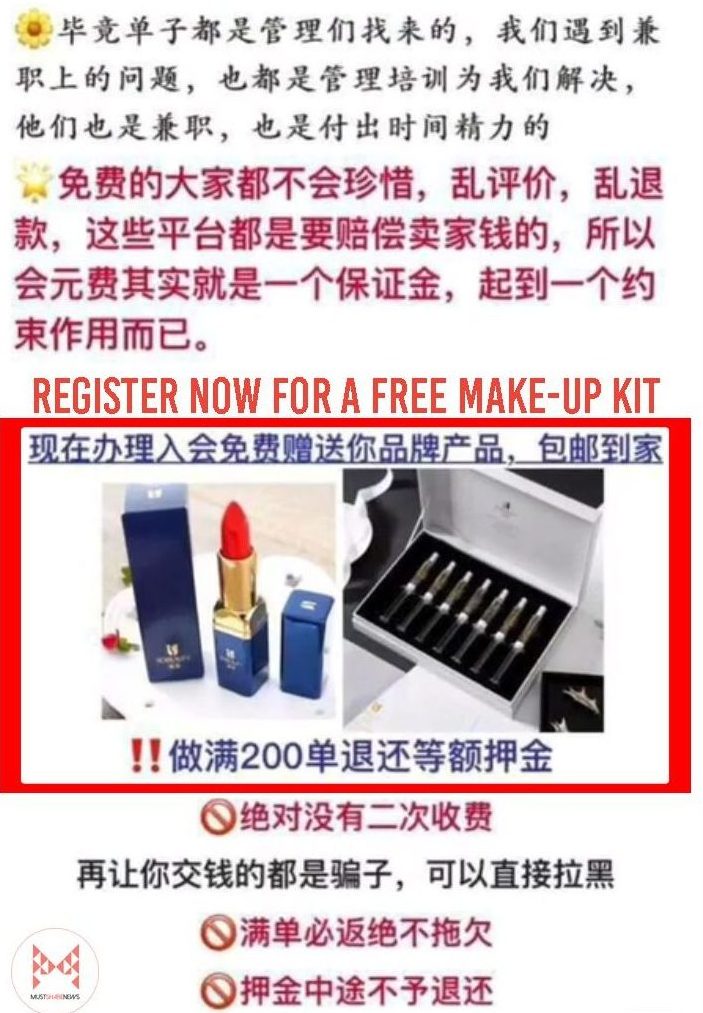 We asked if we could forgo the kit and pay S$6 instead. Or even to deduct the S$66 from our pay. They declined our requests.

Once upon completion of 200 lists with the agents, they would refund the deposit.

Payment is made daily at 12am. For a commission of less than $50, the agents would issue money out via a WeChat Red Envelope. Larger sums are processed directly by bank transfer.

The agent sent us screenshots of past transactions as proof of successful transfer payments to employees. 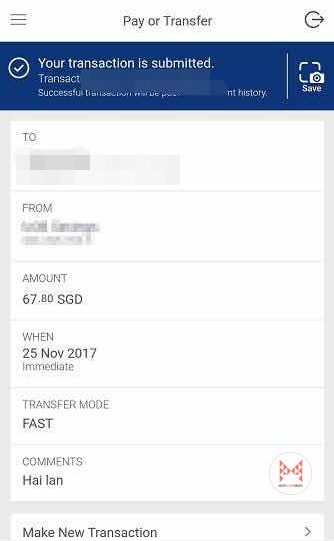 Everything seemed to be planned and executed with the deadliest precision.

Hold up – is this even legal?

The syndicate is made up of 46 WeChat exchange chat groups, with members from Singapore, Malaysia, Hong Kong, Taiwan and Mainland China.

When I asked if this was a licensed operation, they sent me a certificate in Chinese, allegedly from the Guangzhou Municipal Commission of Commerce. 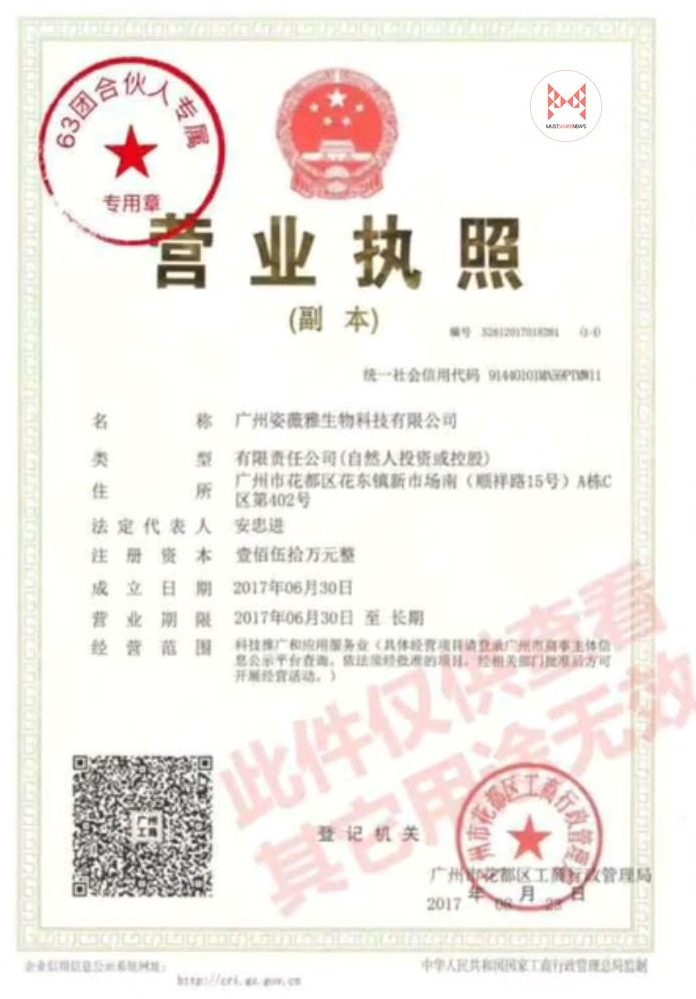 However, upon reading the ‘license’ carefully, we found that it seems to be for a biotechnology company.

Naturally, I questioned why they owned a commercial licence for biotechnology. She insisted that the company is a research and development faculty for cosmetics, and they are simply recruitment agents working for the same company.

According to her, Wei Ji Ya Cosmetics (薇姿雅化妆品), the cosmetic company at the heart of this conspiracy, allegedly has an extensive cosmetics line.

Review what you read online carefully

We’ve revealed the darker sides of online shopping, with regards to the prevalence of fake reviews on-site.

There are currently two schools of thought, on whether shopping sites like Taobao should intervene.

Sellers obviously believe they shouldn’t, since eliminating these fake positive reviews aren’t in their business interests.

On the contrary, buyers believe more should be done to protect users of these websites from inaccurate reviews.

Until shopping sites figure out a lasting solution to this problem, we urge you to take the necessary precautions as a buyer.

Don’t just read the reviews, read them wisely and carefully.

Share this with your online shopaholic friends to warn them about such unscrupulous merchants.