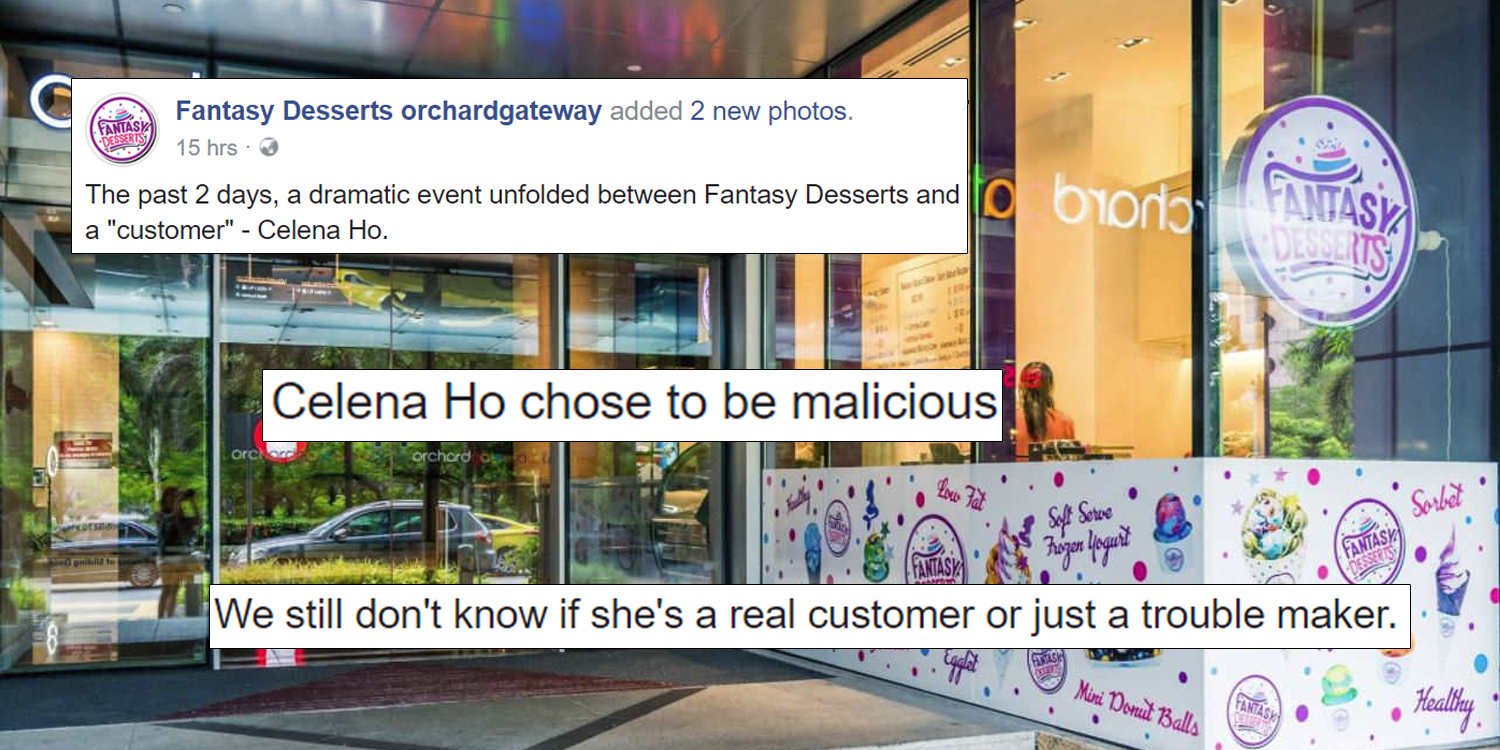 Fantasy Desserts is back and they are not pleased.

Having recently made headlines after a dispute with one of their customers over a negative review, the ice cream shop quickly gained infamy on social media in a matter of hours — which further diminished their already rapidly depleting reputation. On Sunday (28 Jan), Ms Celena Ho left the following after a particularly unpleasant trip to Fantasy Desserts at Orchard Gateway.

Note: Ms Ho has since removed her original Facebook post. All images seen are screenshots before she did so. 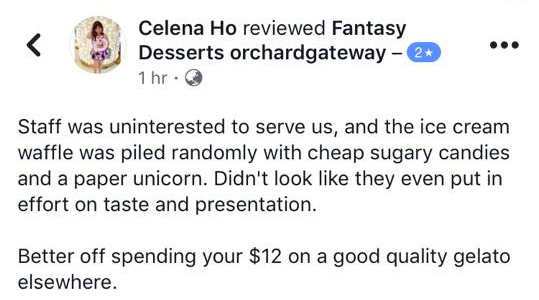 What followed after was a series of back and forth replies between both parties that ultimately led to netizens supporting Ms Ho and chastising Fantasy Desserts.

With many criticising the dessert outlet for having poor PR abilities, surely it was only a matter of time before they released a statement of their own?

Lo and behold on Wed (31 Jan), Fantasy Desserts released a lengthy statement on their Facebook page explaining their perspective – or the truth, as they call it – on the incident. 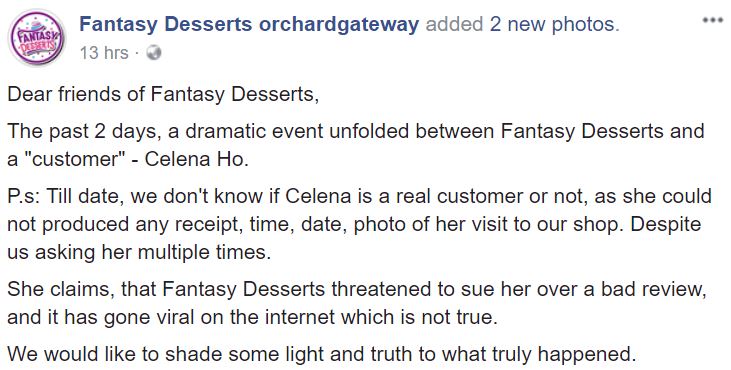 However, it’s pretty long which is why we’ve decided to summarise it just for you loyal readers — so sit back, grab your popcorn and read on.

“Fake” review due to “fake” price

They begin by addressing the initial comments made by founder and director Sara Lim.

In case you were wondering, this was what she said:

According to them, Ms Lim had thought that Ms Ho’s review was fake as nothing from her shop was sold at $12. This amount was eventually revealed to have been an error of Ms Ho’s part — what she meant was $10.90 instead.

While this might’ve provided Ms Lim with a legitimate reason to discredit the review, she could’ve perhaps described it with a word other than fake.

Anyway, Fantasy Desserts attempts to set the record straight, with a summary of their side of the story. 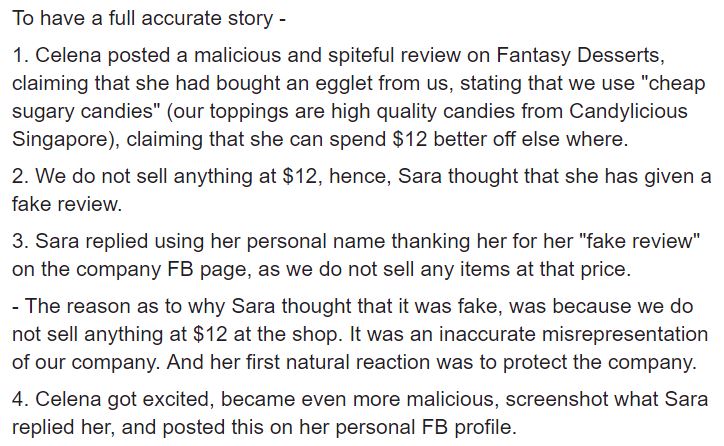 Fantasy Desserts then went on to describe Ms Ho’s intentions to further defame the company as “malicious”, and called her out for being overly eager to do so.

They also accused her of the following:

They were merely informing Ms Ho about the rights that they had to sue her — and never actually said they were going to sue. While Fantasy Desserts is technically correct by saying that they never once threatened legal actions, it’s easy to misinterpret their statement as just that given the aggressive tone used — especially from a customers’ perspective as well.

Which brings us to their next point where they mentioned that the company had already publicly apologised to Ms Ho for their comments.

All while still insinuating that Ms Ho could just be making up the bad review.

They also added that Ms Lim herself had privately apologised to Ms Ho in an attempt to clarify and rectify the misunderstanding.

They even provided screenshots of the private messages as evidence that they totally did what they said.

So much for the apology being private, huh? 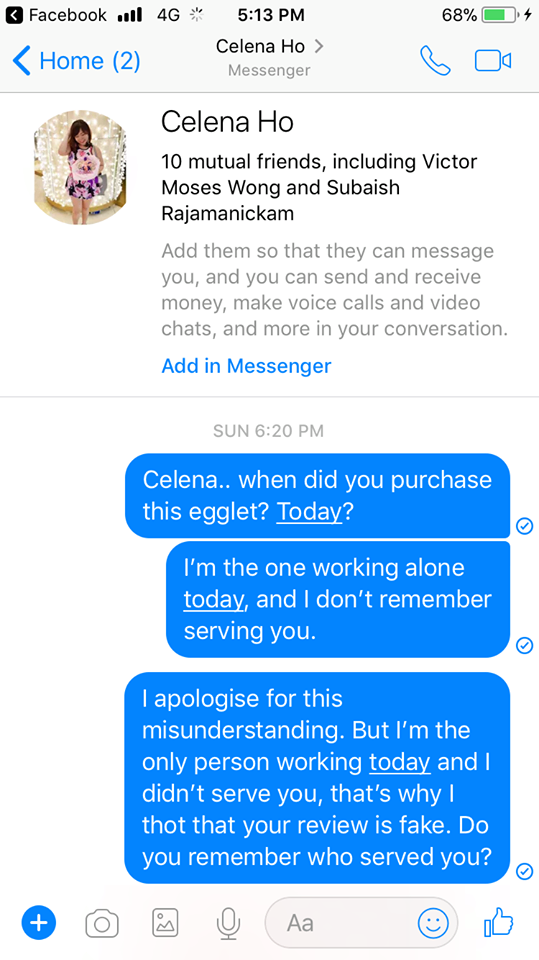 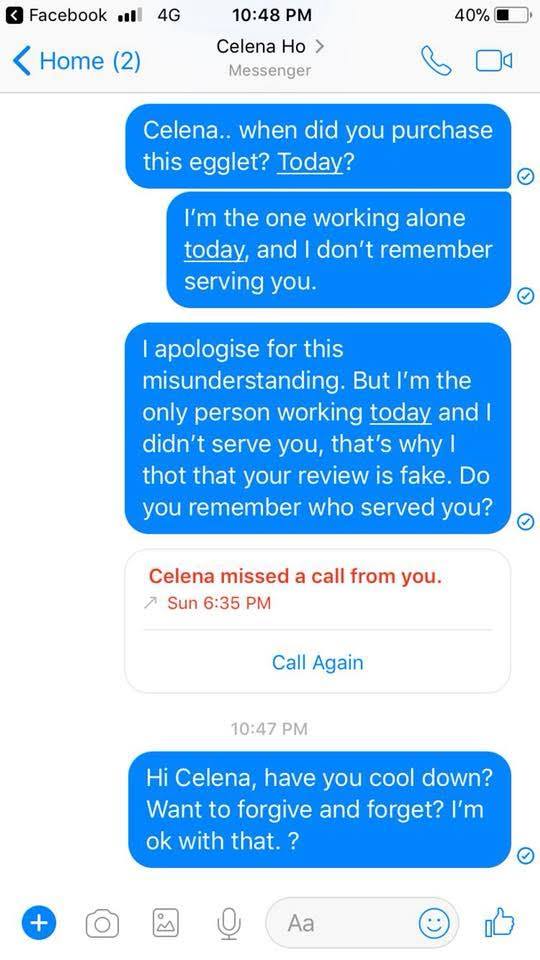 They then ended off by stating that they had already admitted their mistakes even though Ms Ho “chose to continue to be spiteful” and accused her of intentionally ruining the image of the company.

They also called her a liar as well but sticks and stones, right?

Additional notes from the statement

Aside from what was mentioned above, the remainder of their post is pretty much a repeat of what was already said — that Ms Ho never went to the store, and only wanted to defame the company.

They then encouraged netizens to read the true and unbiased version of what happened on Singapore’s most credible source of legitimate journalism:

Finally, they added that Ms Ho could simply be a “troublemaker”, especially seeing how she’s deleted her original post of Facebook with her “false claims”.

If only someone had written or taken screenshots of her original post.

Your thoughts on Fantasy Desserts

What do you think about Fantasy Desserts’ statement?

Do you believe their claims that Ms Ho was simply a troll looking to defame them or are they simply victimising themselves in a simple case of really poor customer service? 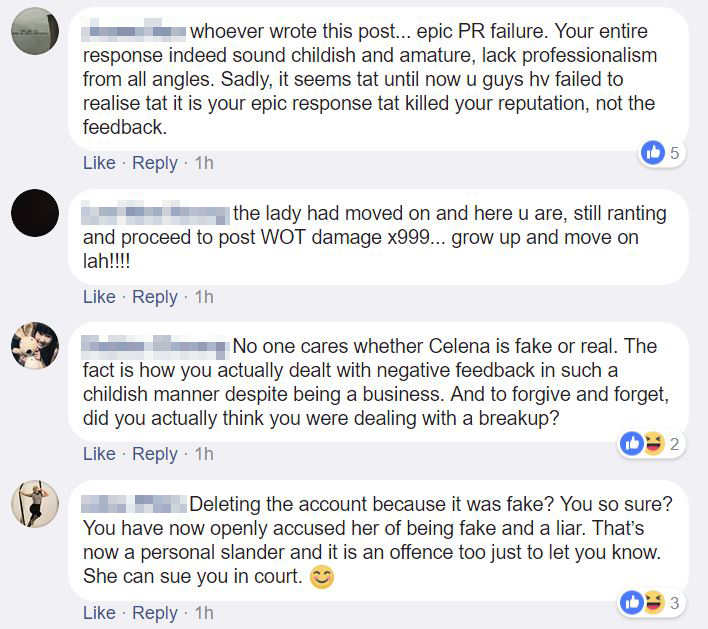 If comments on their post are anything to go by, seems like the dessert shop is living in their own fantasy.