Disgruntled Singaporeans are targeting foreign workers against a backdrop of rising xenophobia. They are creating a ruckus both online and offline.

As one Singaporean boarded the train on Saturday, he observed a female passenger scolding another woman of an undisclosed nationality. She said, “Stop shouting! I can’t stand your shouting! Your stupid shouting, going on for so long! The past 20 minutes, shouting in your stupid language!”

The lady on the receiving end of the shouting looked shocked. She apparently tried to say something but stopped short. The woman who yelled took advantage of and butted in, “shout shout shout, always shouting! You are so stupid! You want to talk in your stupid (language redacted), then go back to your own country, you stupid (nationality redacted)!”

And that was just the beginning of one xenophobic outburst that unfolded over the weekend. The post later swirled on social media pages.

Such blatant outbursts of racism are not even shocking anymore. Amid increasing anti-foreigner sentiment, a backlash towards the Filipino group has unfolded itself in recent years.

Earlier in 2014, a plan to host a Philippines Independence Day celebrations at Orchard Road was cancelled after abusive online complaints by commenters who opposed the event venue.

One vocal critic of Singapore’s migration policies, Gilbert Goh, received plenty of support for his rally against holding the celebrations. 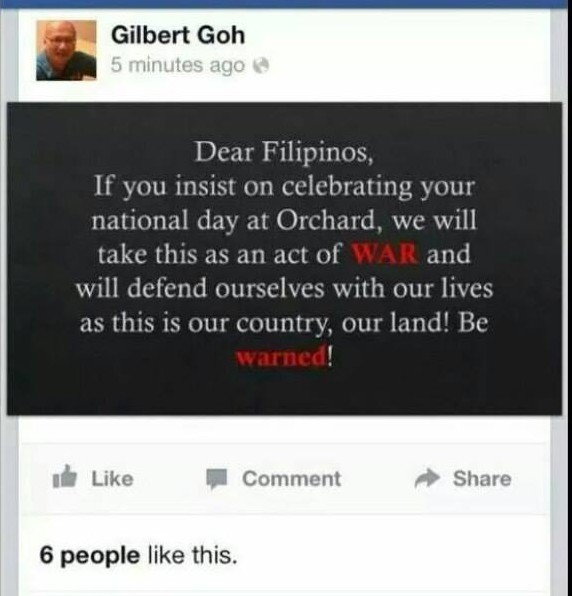 For decades, Singapore has relied on foreign workers to bump up the economy and low birth rates. These workers make up 40% of Singapore’s population today. Without them, Singapore’s economy and infrastructure will likely collapse from the lack of manpower.

So why exactly do people love to hate these foreigners? We need to step back and understand what fuels this abuse.

Like most workers who come to Singapore in search of a brighter future, Filipinos are willing to work in conditions unacceptable to Singaporeans, at lower salaries.

Sociologist Tan Ern Ser told BBC that when Filipinos took on domestic work, “they posed less of a threat, since they were in jobs which were less attractive to locals.”

But now, “they may be perceived as competitors for jobs in sales, services, or professions that Singaporeans would take up but preferably at higher wage levels, consistent with their aspirations”.

The expansion in profile of jobs that Filipino foreign workers look for in Singapore is one of the reasons of the unease generated. More Filipino workers are expanding into more job sectors. Today, it is normal for a Singaporean office worker to have Filipino colleagues. With more joining the service industry, he is just as likely to meet a Filipino waitress, cashier or clerk.

Singaporeans have been often told theirs is a tiny island that lacks natural resources. Now, foreigners are seen as competition for the pool of limited resources in this pressure-cooker meritocracy. 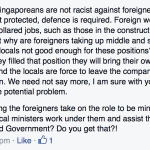 A warmer reception for immigrants needed from the land of immigrants

Thankfully though, those hostile towards foreign workers are still far from the majority. Some just need more time to adjust and realise that nothing great was ever achieved without some sort of help from those around. Singapore would not be the first-world metropolitan that is it today without the contribution of both locals and foreigners.

There is no magic wand to undo the existing damage or a deadline where the ever- expanding, multiracial puzzle pieces will comfortably complement each other. It is a process that takes time.

But I am sure it is in the Singapore psyche to be more accepting of foreign workers, especially for a country built by the hands of our own immigrant forefathers.