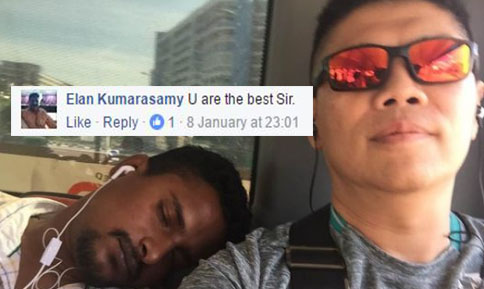 So far we have run stories on foreign workers helping locals out, retrieving balloons and saving toddlers alike.

But it may seem that the affection isn’t reciprocated, and locals don’t treat foreign workers so well.

So here’s a story that will prove that wrong, and there are people in Singapore who do appreciate what foreign workers have done for us.

Somebody To Lean On

We all know that feeling– you’ve just ended a long, exhausting day at work and you would kill for a nap on the way home. Alas! Strangers do not look kindly upon other strangers who use them as a free pillow. But as the famous Major Lazer & DJ Snake song preaches, “all we need is somebody to lean on”.

Well, this one foreign worker managed to find somebody to lean on – Facebook user Yeo KSeah. 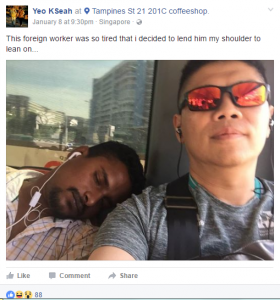 It may seem like a small gesture, but small acts of kindness do go a long way. And netizens on Facebook seem to agree: 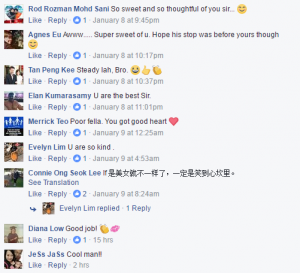 With this belief, Ms Dipa initiated the “itsrainingraincoats” project last year to distribute raincoats and phone cards to foreign workers in Little India during Deepavali. She did so despite her fractured foot, as she wanted to create a more inclusive society for foreign workers.

Be it providing shoulders for foreign workers to lean on, or taking it one step further and offering them a listening ear, every single one of us are capable of making foreign workers feel at home.

We hope there will be more people like Yeo KSeah and Ms Dipa Swaminathan to show us that paying foreign workers isn’t the only way to thank them for helping build our country.

TraceTogether Token Collection Only At Nearest CCs, Wait Till They’re Available To Get Yours