Must Share News – Independent News For Singaporeans
Home People Social Issues 5 Things Foreigners Can Do In Singapore, Despite Being Banned From Pink...

Foreigners Can’t Attend Pink Dot, But Can Do Other Things In Singapore

Pink Dot is supposed to be an event that champions the inclusivity of those with a sexual orientation that isn’t mainstream. In this year’s edition, however, it is being forced to discriminate against foreigners.

Due to recent changes to the Public Order Act, only Singaporeans and permanent residents (PRs) are permitted to attend the event. Read our story about foreigners not being allowed to attend Pink Dot.

However, if you’re a foreigner who wanted to attend Pink Dot but now can’t, don’t fret — there are a lot of other things you can do in Singapore. 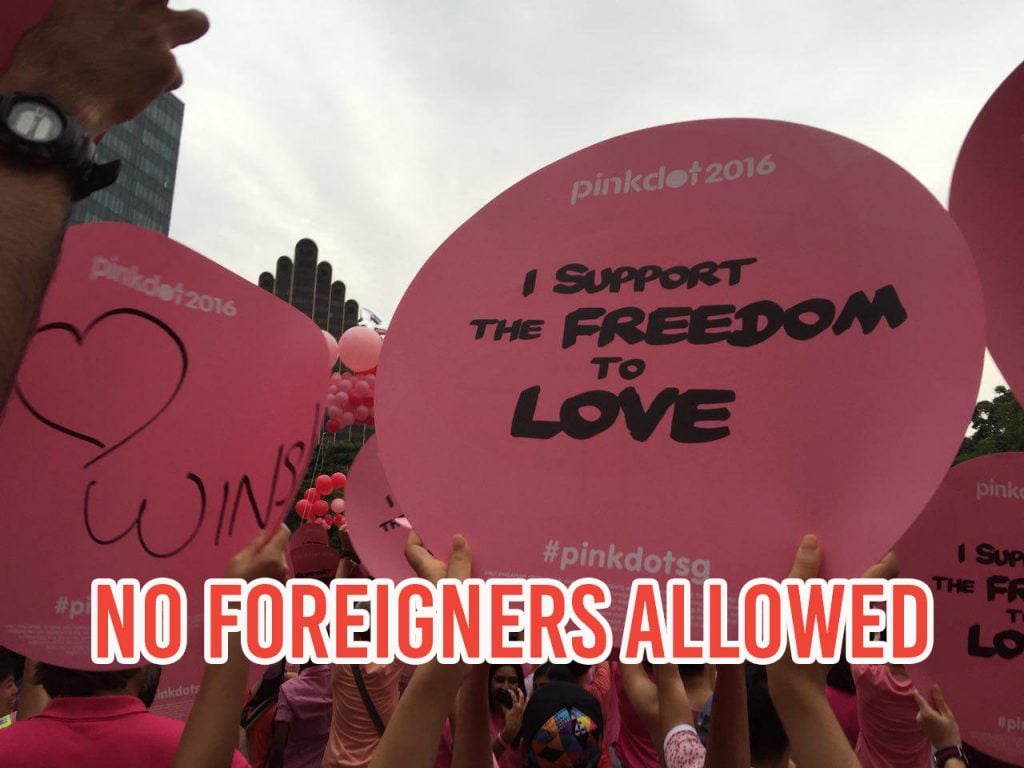 What Foreigners CAN Do

The authorities are clearly reluctant to allow foreigners to be part of the discourse over those who are LGBT (lesbian, gay, bisexual or transgender), according to this vague statement from the Ministry of Home Affairs (MHA) issued a few days after the 2016 edition of Pink Dot.

The Government’s general position has always been that foreign entities should not interfere in our domestic issues, especially political issues or controversial social issues with political overtones. These are political, social or moral choices for Singaporeans to decide for ourselves. LGBT issues are one such example.

However, foreigners are permitted to influence our domestic affairs in other ways.

Let’s examine 5 of the activities our foreign friends can do.

The National Wage Council (NWC) was established by the Government in 1972 to stabilise the labour market. The tripartite advisory board would consist of representatives from trade unions, employers and the Government, allowing the authorities to adapt to higher salary demands from workers without compromising on Singapore’s competitiveness in the global economy.

Advising on the wages of Singaporeans? Surely that’s a sociopolitical issue best left for us Singaporeans to decide for ourselves, isn’t it?

Members of the NWC include foreigners like Mr Hisanobu Hayashi, a council member of the Japanese Chamber of Commerce & Industry, and Mr Wolfgang Huppenbauer, president of the Singaporean-German Chamber of Industry & Commerce.

Various other foreign organisations are represented as well — the American Chamber of Commerce in Singapore is one such example.

The authorities might point to the financial benefits these organisations’ countries provide to justify their inclusion in the NWC — American companies have invested a staggering US$229 billion (S$317.7 billion) in Singapore thus far.

But by the same stretch of logic, shouldn’t foreign companies like Apple and Google be applauded for supporting an event that benefits thousands of marginalised Singaporeans?

If so, why is one set of organisations then allowed to dictate matters affecting the salaries of Singaporeans, while the another set is prohibited from merely funding an event to support members of a stigmatised Singapore minority group?

A good chunk of Christians oppose the Pink Dot events, but few do it with more vigour than Pastor Lawrence Khong.

The part-time magician and full-time pastor of Faith Community Baptist Church (FCBC) absolutely abhors the event. He staunchly believes in “natural marriage”, meaning between a man and a woman, and feels that the act of homosexuality is as morally dubious as incest and bestiality.

Thus, when the anti-LGBT Wear White movement was started by an Islamic religious teacher, Mr Khong wasted no time in mobilising over a hundred churches under his LoveSingapore network to “collaborate” in the initiative. 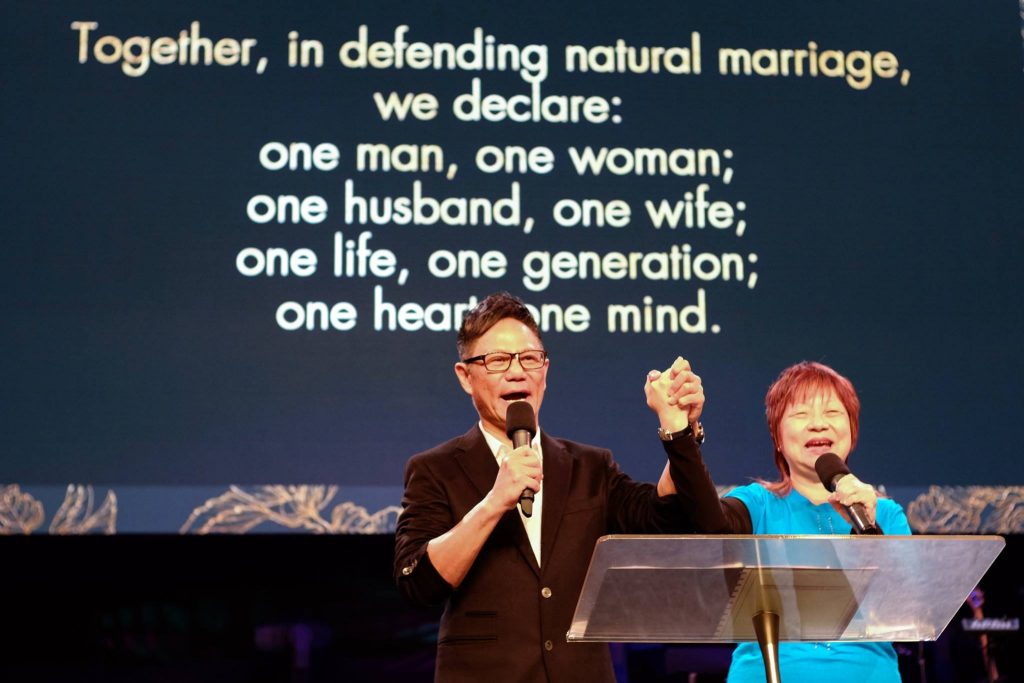 He was reported as saying by Today that foreigners “have no business” supporting Pink Dot as they “cannot and should not meddle with Singapore’s national values”.

Despite taking a strict stance against foreigners being involved in Singapore’s affairs, Mr Khong has, in highly ironic fashion, invited numerous foreign speakers to preach at his church and events.

His more renowned guests include evangelist Ravi Zacharias, economist Zhao Xiao, and author Bill Garlow, all of whom spoke at his moMentum forums.

In fact, the majority of speakers at the G12 Asia Conference, an annual event that he coordinates, are foreign, some hailing from as far as Brazil and Russia.

FCBC isn’t the only (mega)church in Singapore that invites foreigners to preach.

Kong Hee’s City Harvest Church (CHC) does it at a much more prolific rate, securing high-profile visits from figures like Korean David Yonggi Cho, who was convicted for embezzling 13 billion won (S$16 million) in church funds, and televangelist Benny Hinn, who claims he can heal people on behalf of God.

The most frequent visitor to the church, however, was Pastor Phil Pringle, a close friend of Kong. The latter would often shower him with praises, thanking him for sticking with him from the start when CHC was only 200 members-strong and operating out of a “rat-infested warehouse”.

The “bromance” wasn’t a one-way street — when Kong was awaiting the results of his trial in 2015, Mr Pringle urged his followers in a blog post to stand by Kong Hee and blamed the mess he was in on an attack by the Devil.

He then questioned the competency of the prosecutors, claiming that they “failed to produce a single piece of evidence of Kong wrongfully gaining anything”.

Despite the accusations made against the Singapore judiciary, Phil Pringle was still allowed to enter Singapore and preach at City Harvest Church as recently as April 2017.

If questionable foreign individuals are allowed to speak to masses of Singaporeans and directly influence them on political, social and moral issues, all 3 of which the authorities claim should be reserved for locals to discuss, then we should question the ban of foreign entities from Pink Dot.

The Government of Singapore Investment Corporation, more affectionately known as GIC, is a sovereign wealth fund set up by the government to manage Singapore’s foreign reserves. Established in 1981, the firm basically invests in everything from equities, fixed income, and real estate worldwide.

Although investing the country’s money should be a strictly Singaporean affair judging by the MHA’s criteria, the GIC decided to dedicate an entire department to soliciting advice from a panel of foreigners.

The International Advisory Board consists of high-profile players such as Mr David Denison, the former president and CEO of Canada Pension Plan Investment Board, and Mr Deepak Parekh, chairman of India’s Housing Development Finance Corporation, who provide the GIC with perspectives on market developments and advise them on new trends and growth opportunities. 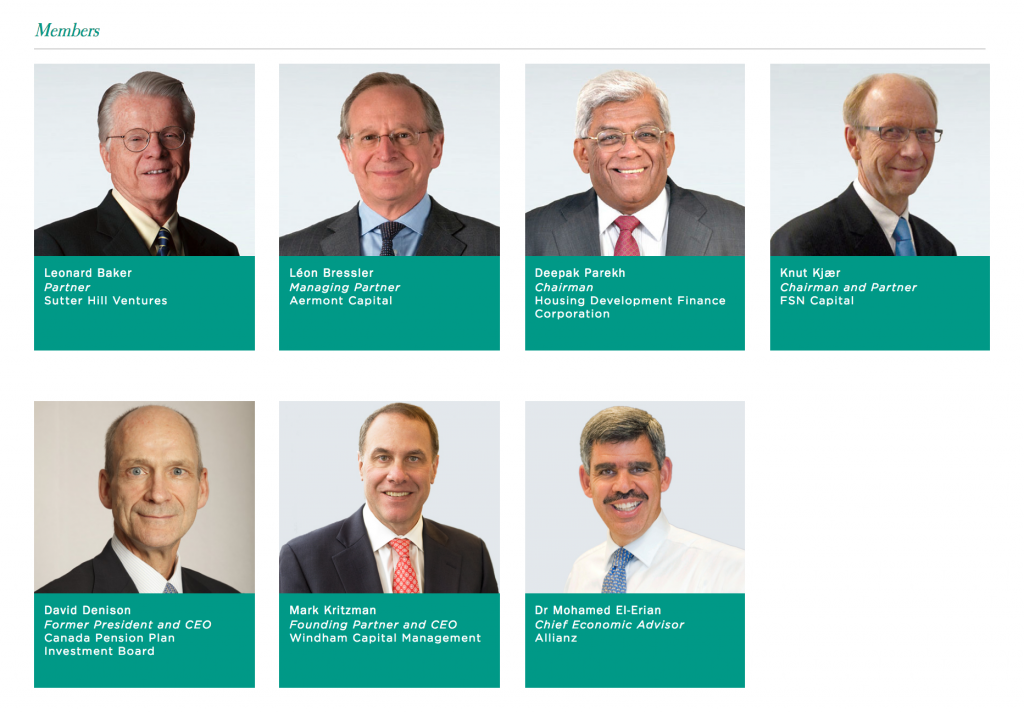 The job scope of some of these advisers extends beyond consulting.

Some, like Morgan Stanley managing director Martin Leibowitz, analyse the risk profiles of current and potential investments, while others like Mr Léon Bressler, managing partner of Aermont Capital, assist the GIC during the investment process itself.

The GIC has been in the news lately following a failed investment in Swiss bank UBS during the 2008 financial crisis — the losses are estimated to be in the billions.

Is offering advice and aiding the Government in investing Singapore’s money an interference in our local affairs? Many would say yes.

If foreigners and major financial institutions get a say in something that has far-reaching consequences, why aren’t foreigners or MNCs allowed to sponsor or participate in an event that’s significantly smaller in scale and doesn’t involve billions of Singaporeans’ money?

4. Sponsor Events Organised By The Govt

As even The Straits Times has noted, events organised by the Singapore Government actively seek sponsorships from foreign companies.

However, both Visa and Microsoft, both previous sponsors of Pink Dot, are curiously barred from sponsoring Pink Dot this time round, while they were allowed to support the World Cities Summit and Fintech Festival.

If sponsoring an event constitutes “interference”, as it is deemed to be when foreign companies sponsor Pink Dot, how come MasterCard and Microsoft are allowed to “interfere” in the World Cities Summit?

And if the lives of Singaporeans are potentially affected by discussions that are “interfered in” by foreign companies, then why isn’t a community-organised event, one with considerably less corporate agendas, afforded the same freedom when sourcing their partners?

5. Accept Scholarships To Study In Singapore

This figure was closer to 16% in AY2012, based on an archived reply by the Ministry of Education. 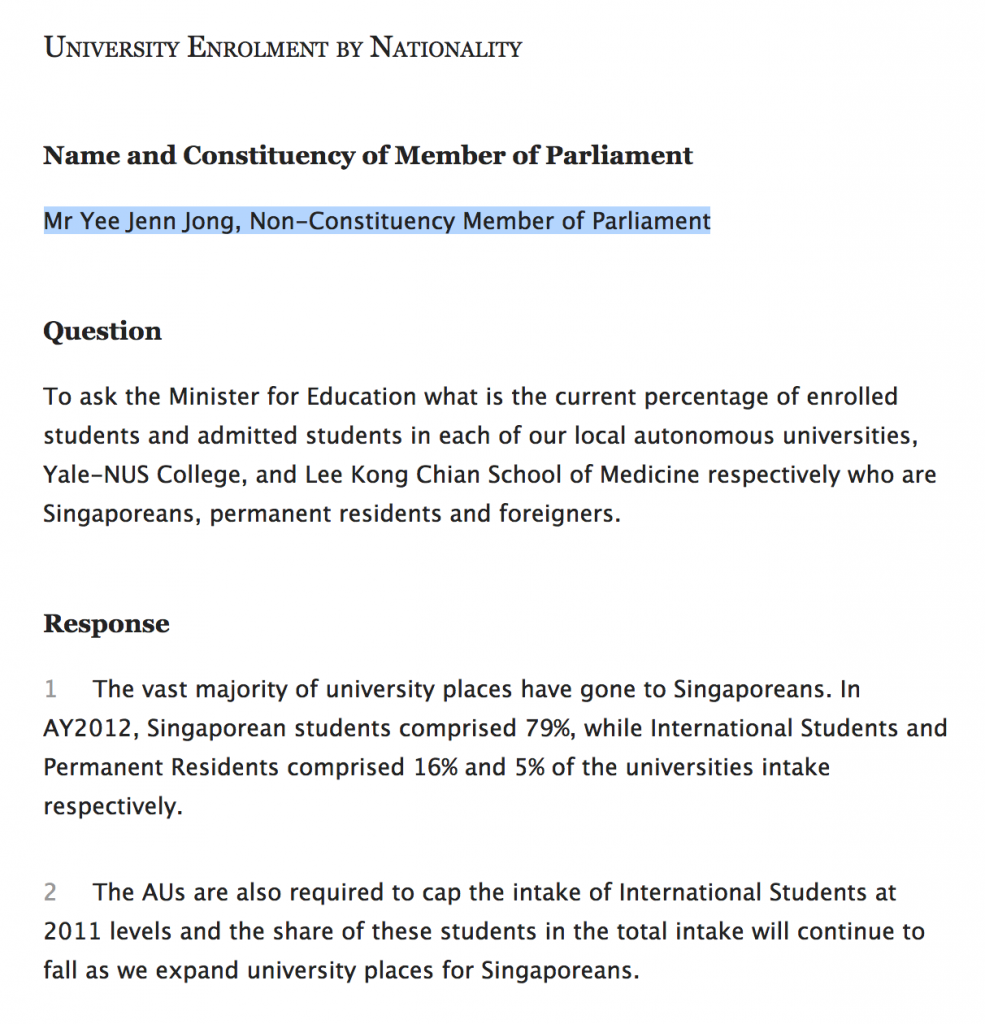 Although most international students pay significantly higher school fees, the experience they are getting is similar to that of local students — they organise events, participate in varsity activities, and interact with the rest of the student population daily.

By slowly integrating them into our society, could one argue that they’re slowly influencing our thinking based on their perspectives and actions?

If an ang moh student manages to convince his local classmate that there’s nothing criminal about being LGBT, would he be deemed a foreign threat that’s interfering with our local affairs? What about a foreign professor who shares his opinion on why Section 377A should be repealed with his Singaporean students?

The influencing done on such a micro level is hard to police, and attempting to just restrict the most visible entity (Pink Dot) instead of addressing the issue head on only raises more questions in the public’s eyes.

What Foreigners CAN’T Do

According to an announcement from Pink Dot on May 14, the law “no longer distinguishes between participants and observers, and regards anyone who turns up to the Speakers’ Corner in support of an event to be part of an assembly”. Under previous regulations, foreigners were allowed to observe proceedings from the sidelines.

The changes extend beyond the Pink Dot event — organisers and participants of events held at the Speakers’ Corner would have to abide by the new rules. Organisers and foreigners caught flouting this rule can be fined up to $10,000 and/or jailed for up to 6 months.

Some might find the latest move unsurprising — inevitable, even — following a clampdown on foreign interference in local affairs. 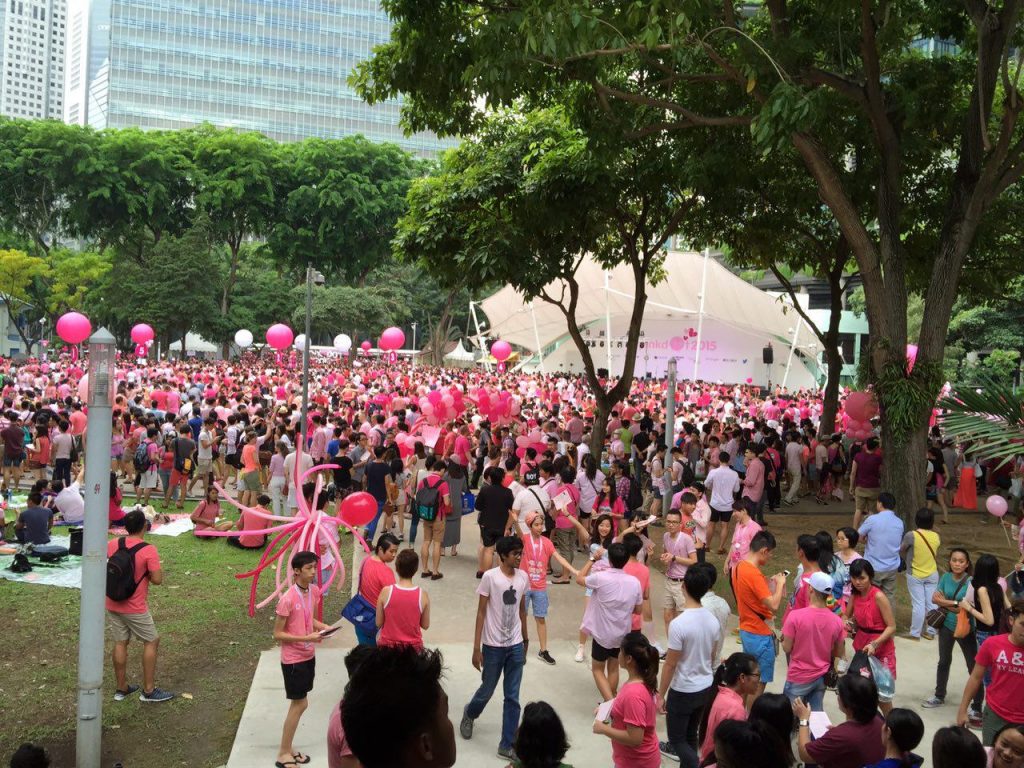 There was a silver lining, however. The ban on foreign sponsors triggered the Streisand Effect, with many local brands now eager to jump on the bandwagon despite Pink Dot opponents attempting to shame them. As of right now, over 100 local companies have signed up to fund the event; in 2015, the organisation could barely convince one to do so. Read our story on local brands that sponsored Pink Dot.

Is the support for a marginalised minority such a threat to our society that an all-encompassing ban on foreigners is required to protect our country’s interests?

As clearly illustrated above, foreigners have already been woven into the social fabric of our country and influencing local affairs in different ways. They are in our schools, in our workplaces, and even in our government organisations.

Advising on our wages, importing foreign religious ideologies and investing the country’s reserves are all actions that have actual, far-reaching consequences for the everyday Singaporean compared to a once-a-year event at Hong Lim Park.

Should the authorities insist on restricting foreign elements in events like Pink Dot, they first need to remember their cordial relationships with them in other stratas of society.

Otherwise, the hypocrisy will continue to be deafening.

Featured images adapted from the GIC 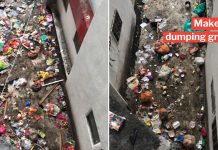 M’sians Throw Trash Out Of Windows As They’re Under Lockdown, Turning Ground Floor Into Dump 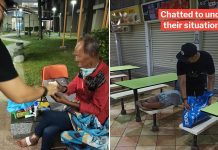 Volunteers Distribute Basic Necessities To Homeless In S’pore, Urge Others To Spread Kindness