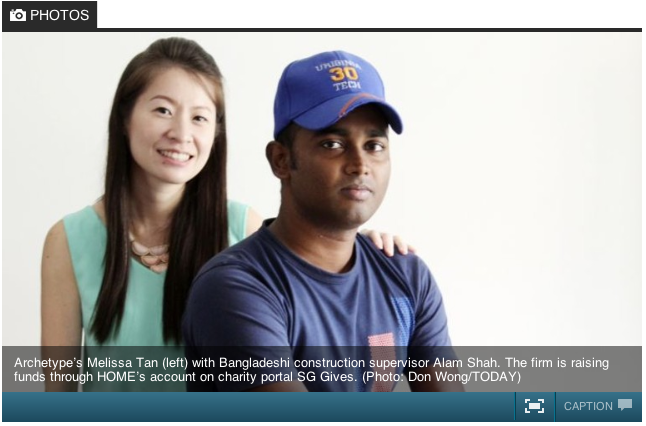 A company that goes by Archetype is helping a Bangladeshi construction supervisor raise funds to help him fight cancer.

His story is a heartbreaking, one—Mr Alam Shah was two months into his new job after working for four years as a manual labourer. He was earning $1,200 a month and had a bride waiting in Bangladesh. Then, he was diagnosed with cancer, and doctors gave him a year to live if the disease was not treated.

While most employers would have sent him home, his company decided to do otherwise and raise funds for his treatment, which costs about $60,000. Archetype hopes to raise $100,000, which includes help for his ageing parents and follow-up care.

Archetype will have to use its profits to help Alam, and they have also asked the Humanitarian Organization for Migration Economics (HOME) to raise funds through the latter’s portal called SG Gives. The NGO has said that this is a first for an employer.

Treatment Alam Shah Has Had So Far

Alam Shah has had treatment for stage 3 brain cancer last month, with doctors removing 40% of the brain tumour. He would have to undergo chemotherapy and radiotherapy to stop the cancer from spreading further. This may prolong his life up to 10 years.

How You Can Help

With so much resentment about foreigners coming to work in Singapore, this incident makes us sit up and take notice. It’s awesome that a company is doing all they can to help this man, and so far, they have raised about $2,200.

Singaporeans are kind, generous and gracious. It’s up to us to dispel the stereotypes that portray us as rude and nasty people.