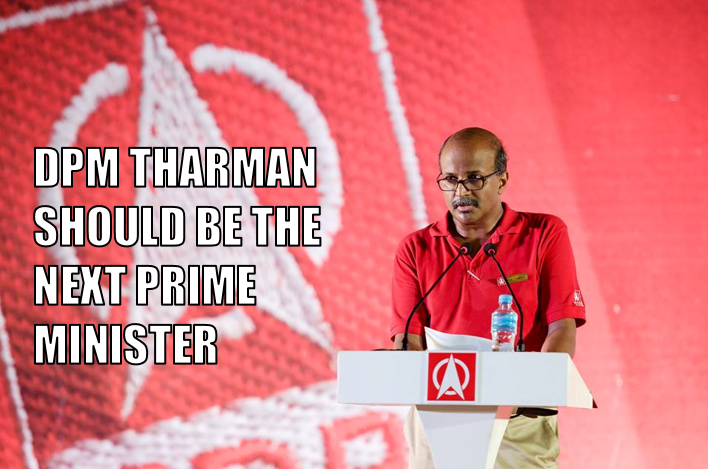 The electoral rallies are fast approaching to an end

The sixth day of rally commenced on 7th September including the first lunch-time rally held by the Singapore Democratic Party (SDP).

There were tears, political swipes, and warnings made by candidates from various political parties at the rallies last night (7 September).

MustShareNews share with you 14 best quotes that defined that sixth day of rallies at the 2015 General Election.

DPM Tharman is probably the most brilliant of our current ministers and many of us think he would make a fine Prime Minister.

To tell you a secret, there are many of us in the alternative parties who hope that one day DPM Tharman will have a falling out with the Prime Minister, and will come out to lead a grand coalition of opposition parties – Pakatan Rakyat Singapura – to present a real alternative to the PAP Government.

It’s not very often you see an opposition endorsing a PAP candidate.

Meanwhile, Tan Jee Say, whose party will be up against DPM Tharman at the Jurong GRC must be like —

Dr Tambyah has been wow-ing Singaporeans with his English speeches in recent rallies. Last night, he decided to take it up a notch and gave a speech in Mandarin.

Dr Tambyah’s enunciation of the Mandarin is really remarkable, the whole speech is quote-worthy. 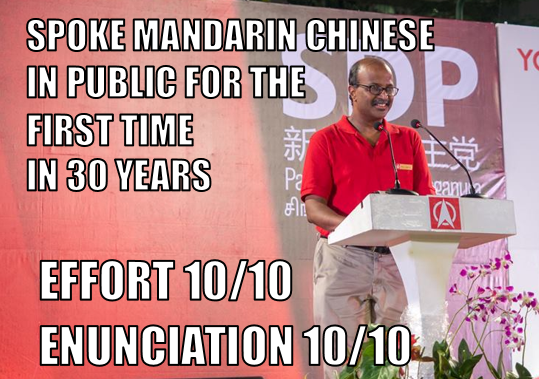 As you laid down to rest, democracy is not yet at hand.

But don’t you ever believe those who say that your fight on earth was irrelevant and personal.

Nothing could be further from the truth — you have inspired an entire generation of Singaporeans and we will keep the fight going.

In the whole of Singapore, if Dr Chee says he is second when it comes to ‘chut pattern’, no one else would dare to claim first. [in Mandarin]

Not quite the most professional thing to say at a rally.

5. What are the Opposition really up to?

They [the opposition] are only interested to get into Parliament for the glamour; for them to make some noises there; for them to give flowery speeches.

The candidates have no interest to visit our residents to hear their ground concerns.

Have they seriously walked the corridors and staircase of our HDB blocks? Have they really walk through the private estates? I heard they just cycle through, I don’t know whether they had really walked through.

I have just one message to send to the SDP.

In the PAP, we do not have a tradition of backstabbing our mentors. 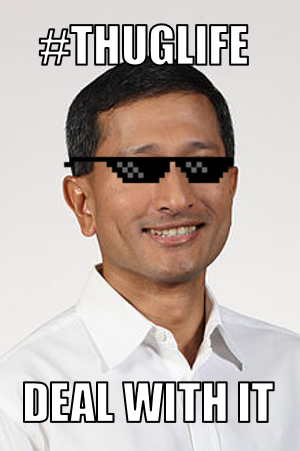 Boundaries redrawing in Singapore is not just a joke, it is also a waste of money.

8. What an election really ought to be

It should not be about the playing of nasty politics.

This General Election should not be about trying to pin Singaporeans — who might not fully support the PAP, or pledge their undying loyalty to the PAP — as being disloyal to our country.

9. I joined the Opposition because…..

I’m angry. I joined the opposition because I feel that the PAP has become very arrogant. 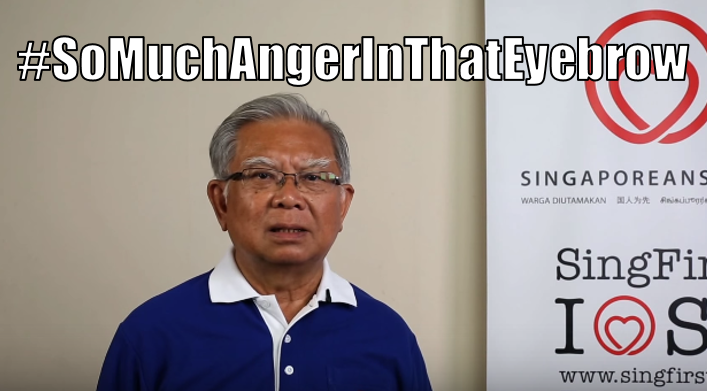 Ang Yong Guan response to the PAP holding many rallies around Singapore — the PAP is also planning to hold 7 rallies today (8 September), including a lunch time rally.

They (PAP) want to flood S’pore with rallies but one WP rally (turnout) can beat at all their rallies combined! 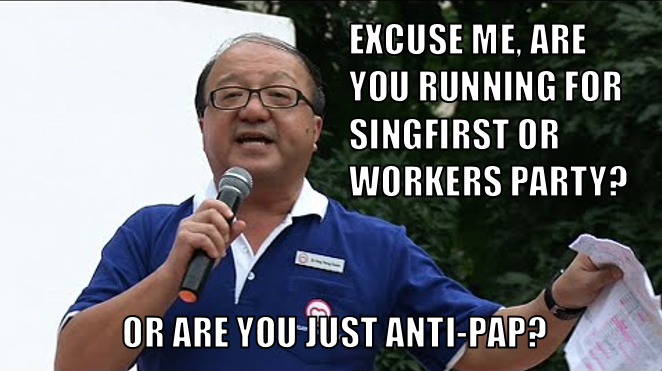 11. What a handshake means

A handshake is basically, a promise, a commitment, a tall order, means I must meet the tall order.

And if the result is good, thumbs up man.

And if the result is lousy, what happen?

I’ll have whatever he’s having before rally speeches.

In the National Rally, when PAP talked about baby bonus, maternity leave, paternity leave — but he never mentioned about single-parent families.

They also hold a Singaporean passport.

A lot of you may not be able to see all this, but if you walk the ground, you can see them suffering.

13. What is this election about?

This election is not about upgrading your facilities or have new facilities.

This election is about our right — our right to get back our CPF.

If they [PAP] going to achieve 6.9 million, we, Singaporeans is going to be a minority in our own country!

The entire campaign is ending soon

Its just 2 days to the end of all the rallies and speeches.

3 days to cooling off day and 4 days to the day we have to cast our votes.

With the campaign setting down soon, we only expect the fight by political parties to intensify and it will be much more exciting as candidates will attempt to reclaim lost grounds to make last minute assaults against their opponents.