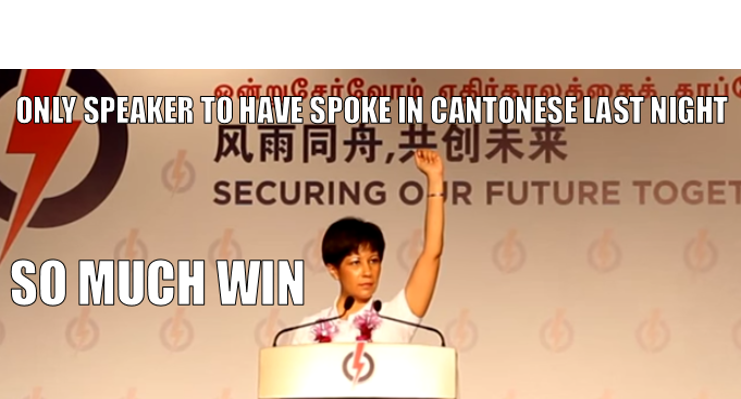 It was the PAP vs WP on the first night

Here it is, the first night rally of GE2015 and a fitting “clash” between the incumbent, People’s Action Party (PAP) and the main opposition, The Workers’ Party (WP).

WP spoke at Hougang, while PAP spoke at Tanjong Pagar, both for similar symbolic reasons.

Hougang SMC is a stronghold of the Workers Party, having been under the charge of the WP Secretary-General, Low Thia Khiang for 20 years. Hougang remained a WP stronghold even after Mr Low left the constituency for loftier aims in the previous election — unlike a certain Potong Pasir.

Likewise for the PAP, Tanjong Pagar is the constituency of the late former Prime Minister Lee Kuan Yew since 1988. Holding their first rally there certainly is trying to bring up the Lee Kuan Yew-vibe in the coming General Election.

The WP rally was rather more densely populated than the PAP  one. 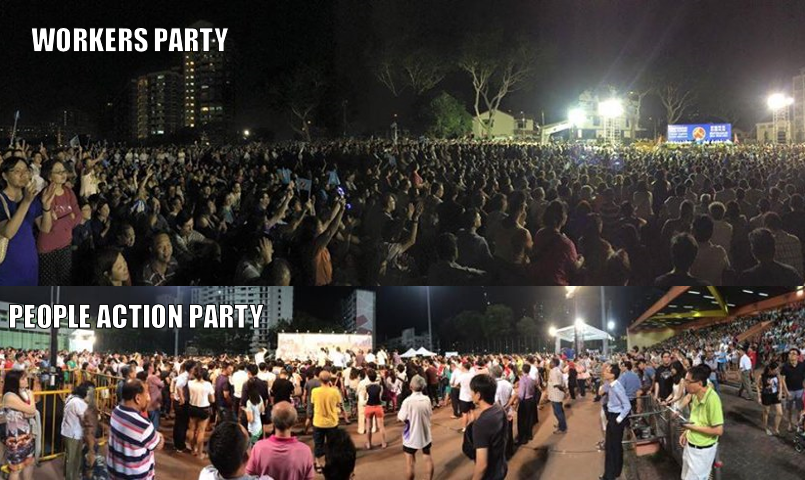 However, it may be more important to hear what candidates said during the rallies, MustShareNews pick out 16 best quotes of the night from both parties.

Honest, capable, most of all these are people of integrity.

You can trust them.

Because in politics, its not just what you say, its not just how good you are at making a speech — not so hard to stand on a platform like this and look good.

Smile, wave a little bit, relax. Can — anybody can do that, train you — can. But if your heart is wrong, cannot be trained.

The PAP Secretary General let in on big plans for Tanjong Pagar to support the PAP.

We will have a big area [in Tanjong Pagar].

3 times size of Marina Bay & we will build something 3 times as beautiful as Marina Bay.

No surprise that Lee Kuan Yew name was brought up during the rally in the constituency of the late founding father.

50 years on, we have tried so hard to build a special country for ourselves and for our children.

Why should we let go of this because someone else promise us to be average and normal?

Mr Chan makes it clear that his conscience is clear when he stands before Tanjong Pagar in the General Election.

[T]he Oppositions do not know you.

They do not know you like we do. They will not care for you, the same way as we do.

7. The special thing about Tanjong Pagar

And we care for each and every single one of them who have come to see us.

That is the Tanjong Pagar Spirit.

The entire speech was pretty quote-worthy.

Note her Cantonese reply to a resident from 0:30 – 0:33 — she was totally not reading off the script.

Our purpose is to better your life, not to oppose for the sake of opposing.

On why he joined politics —

Life is too short and too special to be kiasu, kiasee, and kiagui (scared of ghost).

Why he disagree with the Primary School Leaving Examination system —

[B]ecause 12-year-olds need to be encouraged, not to be sorted out like sheeps and goats.

12. What colour is Marine Parade?

[B]ecause Marine should be blue, not white

[W]hen somebody pushes you around, you must fight back or else the bully will keep pushing you around.

I guess fixing the Opposition is more important to the PAP than fixing the SMRT, the hospital bed shortage, and improving the Singaporean core in our workforce.

Without Hougang, the Worker’s Party will not have Aljunied or Punggol East, we remember you, Hougang.

If we (the WP) had done anything wrong, we would all be in jail! If there was any corruption, the Corrupt Practices Investigation Bureau would have checked on us — they couldn’t have let us off! [in Teochew]

There you go, the 16 most quote-worthy phrases from the Workers Party and the People Action Party on the first night of the election rallies.

Tonight, we will see 6 elections rallies across the island with other opposition parties also kicking off their rallies.

Its 9 days to Polling Day when you will decide the future of this nation.

Featured Image Via TanglinCairnhill
With References from The Workers Party, People Action Party