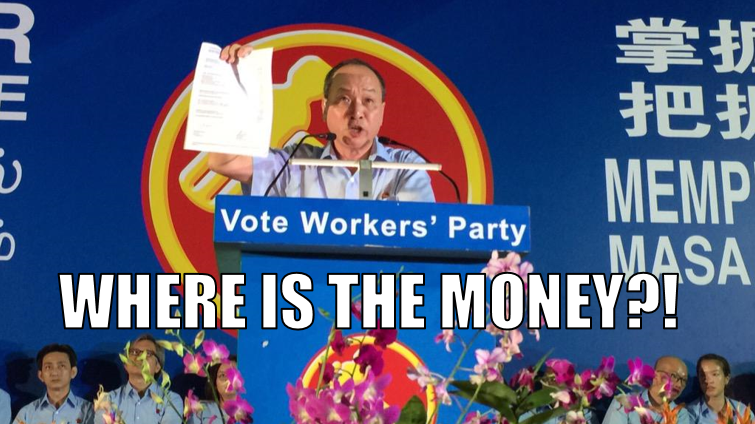 It was coincidentally Low Thia Khiang’s birthday yesterday as well

Singapore entered the fourth night of the General Election last night (5 September). 9 rallies were held at various part of Singapore. Candidates were fiery, and audiences were excited as usual.

With just 5 more days left before you cast your votes, its time to keep up with the election news if you haven’t been doing so, because its all very exciting.

Once again, MustShareNews brings you the 13 best quotes from the rally last night.

In an election, it’s natural for Opposition parties to focus on things that are doing so well, and then they use that to stir and to get people excitement, and all upset.

And certainly, not everything perfect here in Singapore. In fact, I think if you are looking for perfection, you probably can’t find perfection this side of eternity.

But I learnt from young to count my blessings in life.

2. What is cheap? Ask Tharman Shanmugaratnam

But there are also scare mongers, talking about what the PAP would do after the elections.

They [SDP] say, cut the defense budget to half what is it today, within 5 years time.

That is naive, dangerous, but most of all, for discerning voters, opportunistic.

Sure he [Chee Soon Juan] made mistakes, in particular, he made some political mistakes early on in his career.

But all of us have, even the Prime Minister in the last General Election, made a very public apology.

And some people think he’s going to make another apology in the next few days.

Upon hearing the audience booing at the mention of Dr Vivian Balakrishnan, Dr Tambyah urged the audience not to boo.

It may come as a shock to you, if I say this, you better hold on to your seats or whatever you sitting.

Because what I’m about to say will record significantly on the Richter scale.

I said this before, and I will say it again — the PAP is NOT all bad.

Some of the MPs genuinely work and care for the people. But by the same token, neither is the Opposition the useless and destructive force that the PAP makes us out to be.

Do you see all the notices and signs? the white colour? With the abbreviation of PAP.

No…. Its telling you to Pick Another Party!

They [PAP] wanted to look backwards, what I call misguided nostalgia.

They wanted to keep reminding Singapore of Lee Kuan Yew.

His speech is pretty inaudible but the fact that Mr Chiam See Tong, spoke for SPP’s second rally simply speaks volumes on the Singapore icon. And is definitely quote-worthy.

In his speech, Mr Chiam introduces the candidates of the SPP and thank the support from the audience.

10. On Members of Parliament

If they [Members of Parliament] say, I’m going to give you a covered walkway, now if you want that, great, wonderful.

But if you never ask for that?

But what if you want is more childcare centre, if you never ask for a walkway or what you want is another polyclinic.

Have they heard you?

[Pritam Singh asked] for an explanation why they refuse to [help].

And he [member of the CCC] shamelessly went on to say that the CCC is, and I quote, a monetary organisation for the PAP, unquote.

Now, now if that was the case, why call it the Citizen’s Consultative Committee?

Flashing a report that shows that the Punggol East Town Council had a deficit of more than $S200,000 at the takeover in 2013. Low Thia Khiang turned the tables on the PAP —

So now I want to ask the PAP — where did the Punggol East money go?!

Tonight will be the first night rally with the People’s Action Party. They will only be 4 rallies to choose from tonight — it may be easier for us to decide which rally to attend then.

However, we can totally expect rallies to bump up and more barbs will be traded across the island once the new week commerce.

Featured image via The Workers Party