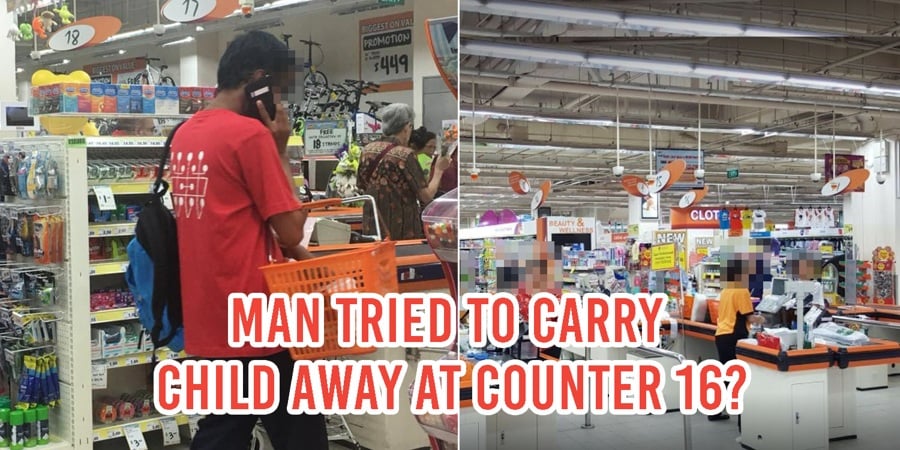 Giant IMM Hypermarket Incident: Man Tried To Carry Young Child Away At Checkout Counter, Police Report Has Been Made

Groceries check. Husband check. Son…taken by a stranger in red. Wait — what?

This was probably what flashed through Facebook user’s Ms Syahirah’s mind, on a regular grocery shopping trip to Giant hypermarket at IMM in Jurong East. Here’s her shocking account in full, posted on Facebook on Saturday (28 Apr) which has garnered more than 5,600 shares at the time of writing.

Some netizens have also clarified that this incident may be a misunderstanding, as the man in red may have special needs.

We summarise the incident after the jump. 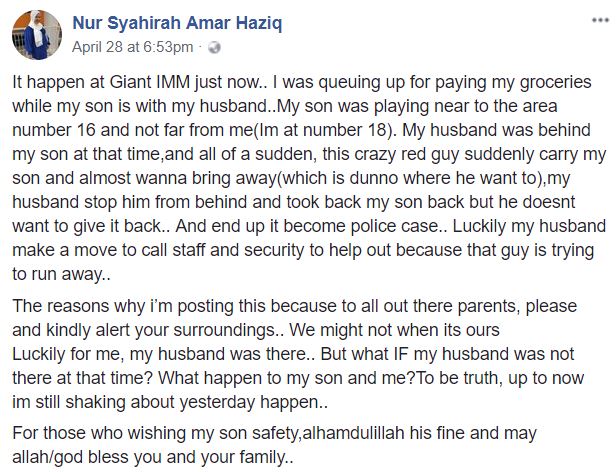 According to Ms Syahirah, the incident began when she was queuing up to pay for her groceries.

Her young son was under the care of her husband, playing around the area near Counter 16. 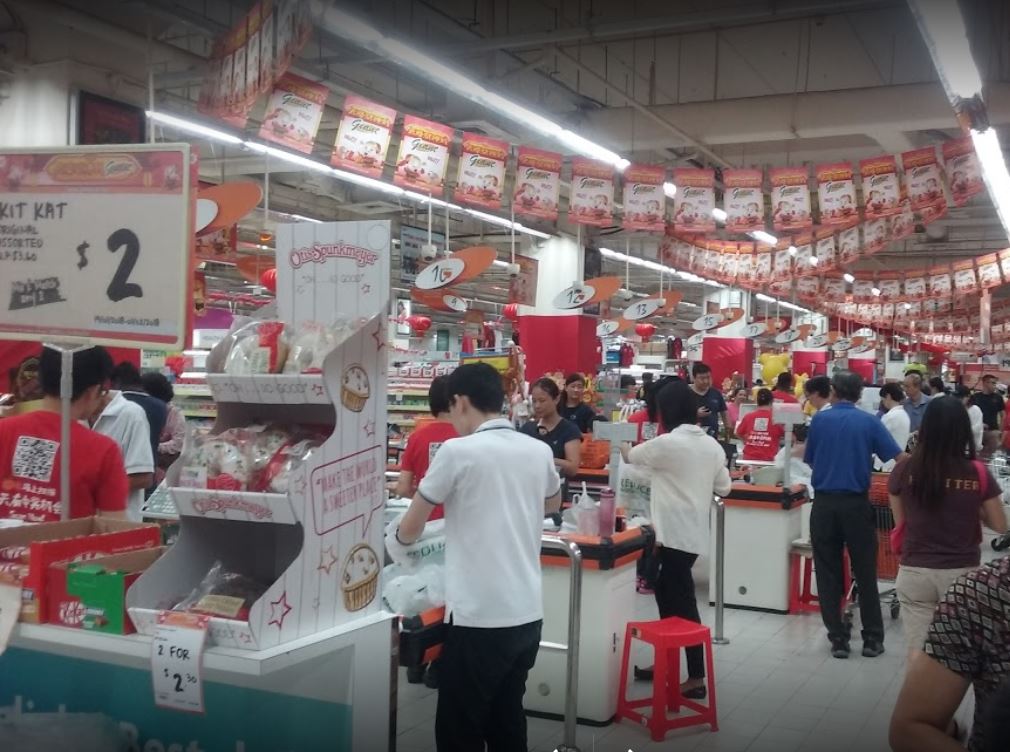 This was not far away from the queue Ms Syahirah had joined at Counter 18.

Ms Syahirah’s husband was also behind her son at the time, watching over him.

What happened next was truly shocking.

All of a sudden, this crazy red guy suddenly carry my son and almost wanna bring away.

Amidst the confusion, it was also unclear where the guy in red wished to bring her son.

However, her husband stopped him from behind and “took back [their] son”.

Only to face resistance from the guy in red who apparently didn’t “want to give [him] back”.

Giant hypermarket staff and security officers were called in

Ms Syahirah’s husband then called the staff and security officers for assistance, as the guy in red tried to run away. 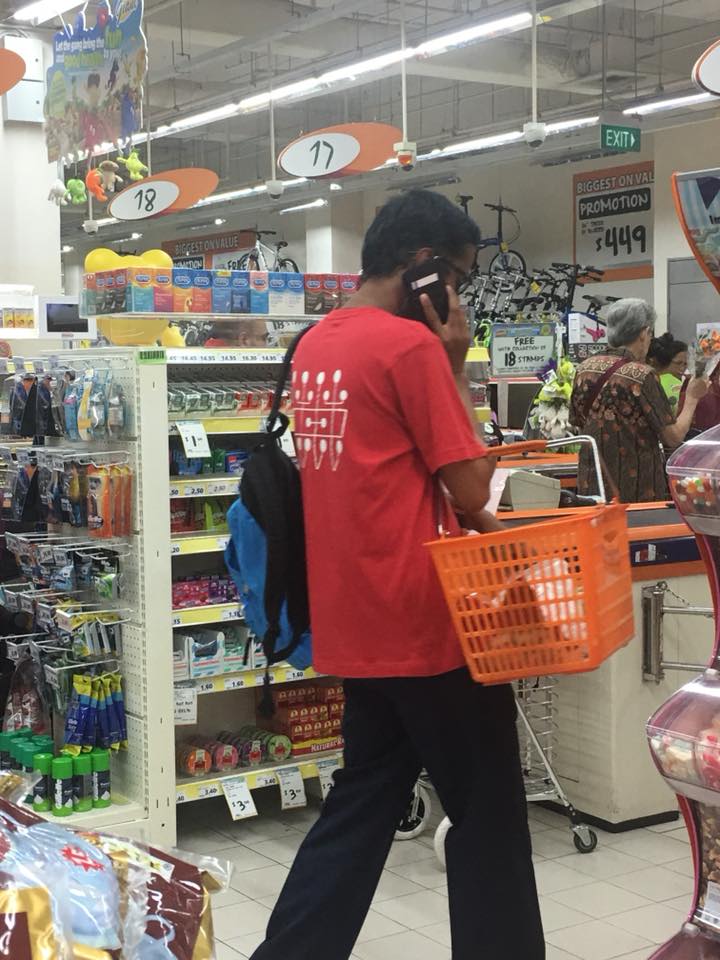 She has also said that it’s now a police case, in her post and in various comments that followed.

This translates to “2 cars, 5 police, 1 encik” and an Investigation Officer (IO) who were involved.

Her husband also avoided a physical confrontation with the guy in red, as they did not wish for her husband to get into any trouble with the police.

Culprit repeatedly tried to run away

The couple also stated that the man in red repeatedly tried to run away, but to no avail. 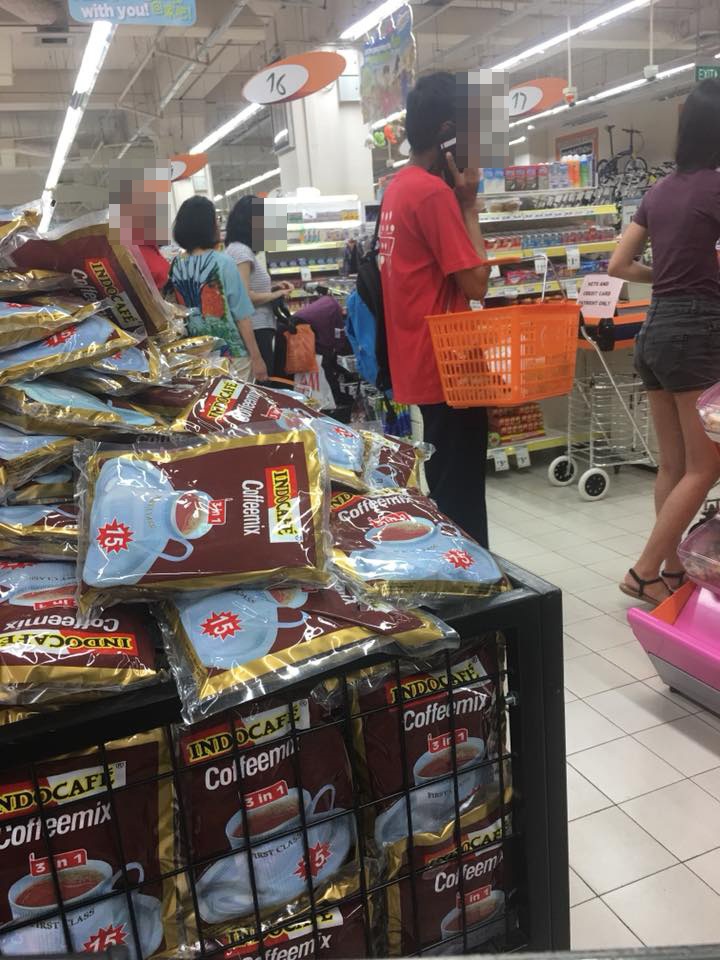 Ms Syahirah hopes the police will take action against the alleged perpetrator, since a report has been filed.

Finally, she reminds parents to always be on the alert, especially in crowded areas and not to take Singapore’s relative security for granted.

She even confessed that she was still shaken about what happened yesterday.

Thankfully, her husband was at the scene to assist her. However, she continues to question the outcome of the incident if her husband had not been present.

Ms Syahirah also thanked everyone for their well-wishes for her son’s safety.

Man in red has special needs?

According to netizens, there’s a chance that the entire incident may be a misunderstanding too.

As the man in question reportedly has special needs, and may have carried the boy because the boy was alone or thought the boy had lost his way.

We live in a comparatively safe society in Singapore, so Ms Syahirah’s experience will definitely strike fear in the hearts of many parents.

Kudos to the security and staff of Giant hypermarket and IMM for stepping in to assist her.

Most of all, her son is now safe, and we can await the results of the official police investigation to be released.

S’pore Man Asks 13-Year-Old To Be ‘Friends With Benefits’ & Agrees To Pay Her, Gets 34 Months’ Jail