In the wee hours of the morning, a man was captured in a viral dash cam video, jumping onto the hood of a Grab driver’s car. 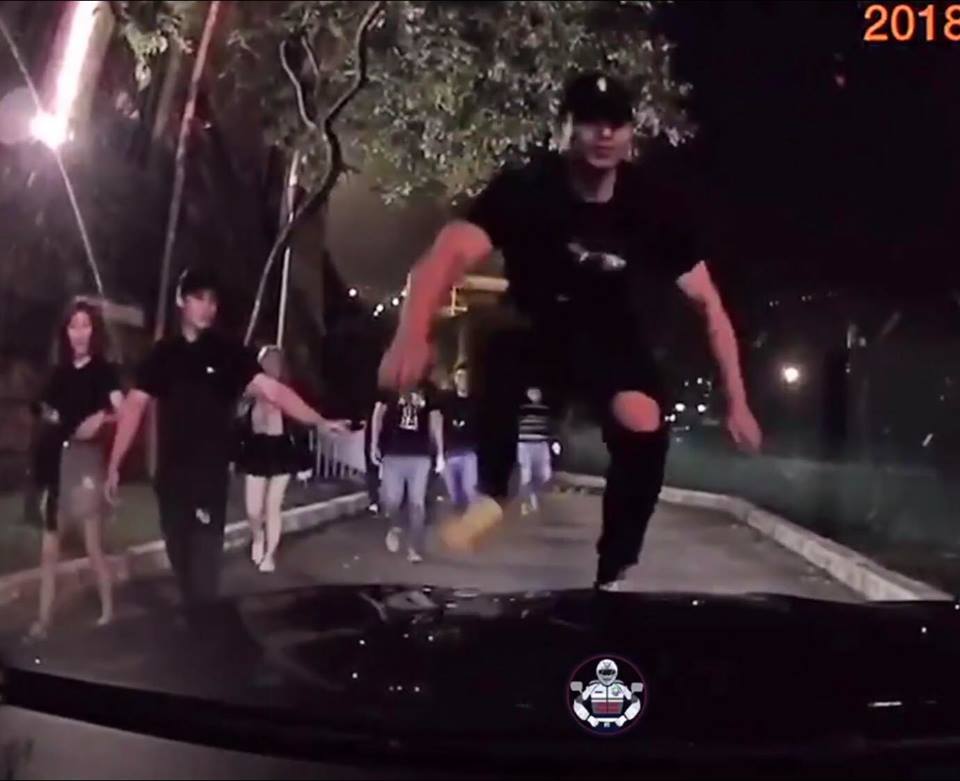 Belleiansa Xu’s Facebook post on Saturday (5 May), condemned the actions of the man who allegedly threatened her 72-year-old father.

A police report has since been made, and the family is looking for witnesses or anyone who can identify this man or his ‘friends’.

Here’s the shocking video in full, we summarise the post after the jump. 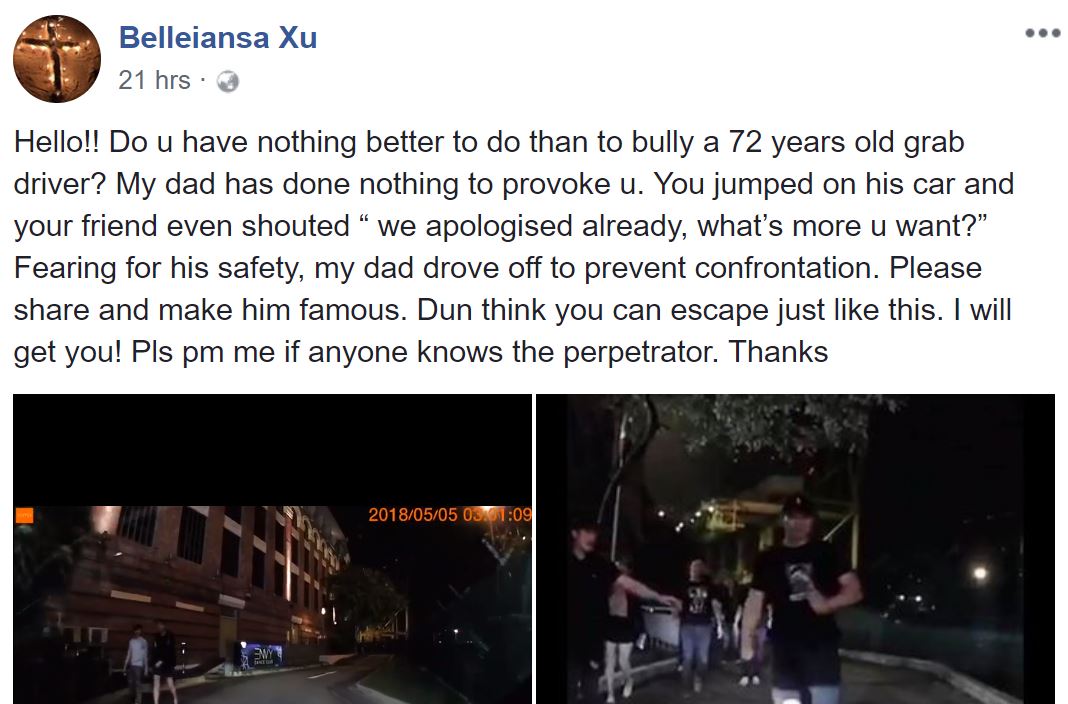 Lawless behaviour of a young man

On Saturday morning, the victim’s car drove in towards St James Power Station at around 3am, responding to a Grab request. 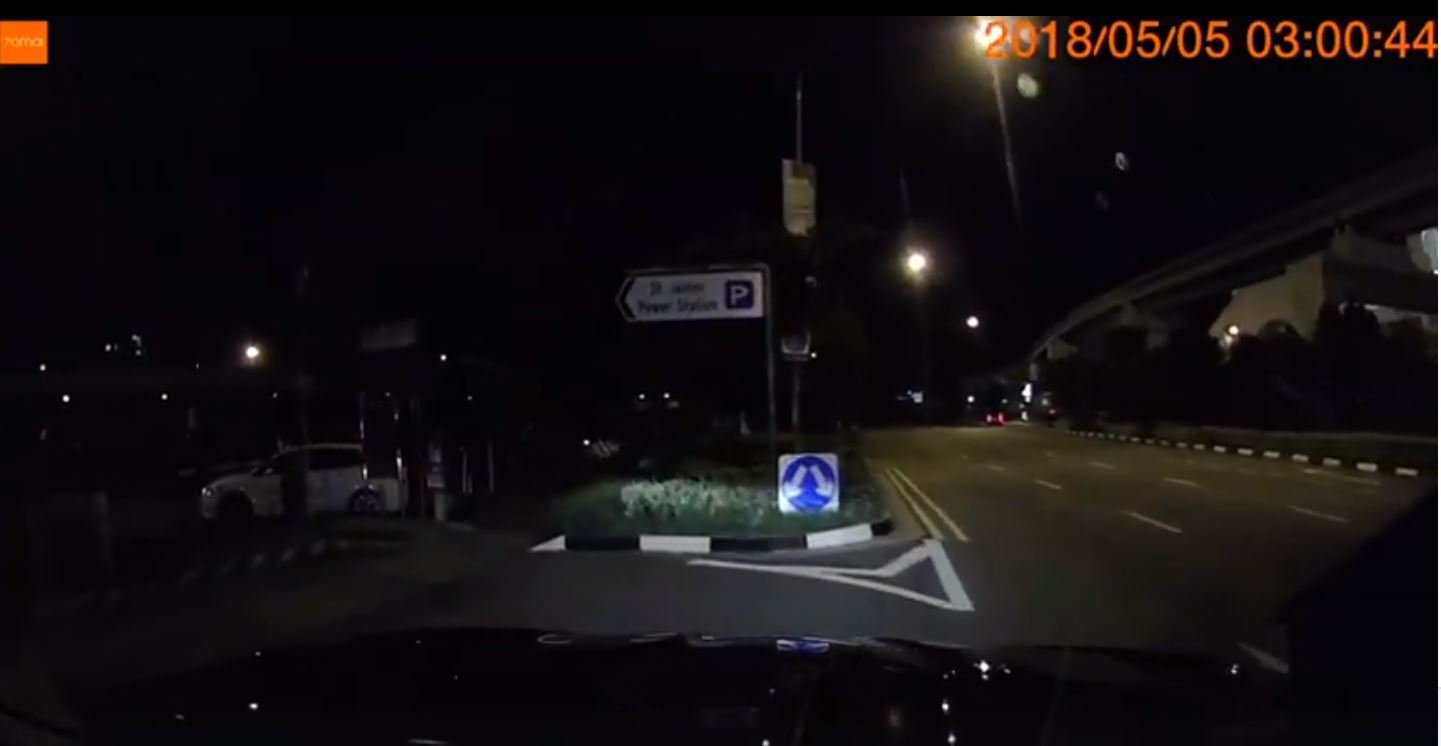 Upon clearing the carpark gantry, the car turned left and proceeded up a gentle slope.

A chilling turn of events

As the driver navigates his car past the ENVY Dance Club sign, a crowd of youths, presumably exiting the club, pass by his car on the left.

Out of nowhere, a man in ripped black jeans paired with a graphic tee and a black cap starts running towards the car at a breakneck speed.

Despite the warning calls of everyone present, he bizarrely leaps onto the hood of the car.

The video even captures the impact, with the viewing frame moving shakily as the car hood absorbed the weight of his assault.

Fortunately, the driver manages to bring the car to a grinding halt.

As the victim toots his car horn in apparent shock, the man stomps down hard on the windscreen.

Jumping off the car

The rest of the video doesn’t explicitly show how the delinquent youth gets off the car. 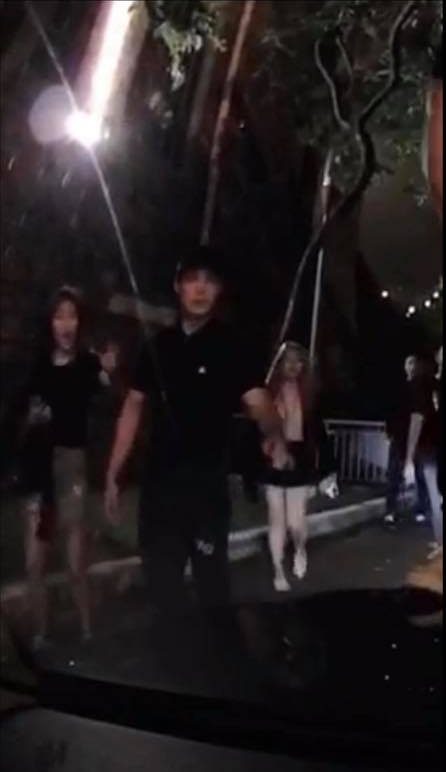 However, banging sounds can be heard in the aftermath.

And through further shakes to the camera, we can infer that he jumped off the car at some point.

The driver can be heard responding in Mandarin to what sounds like a car door being slammed, “不要这样啊”(bù yào zhè yàng a), which loosely translates to,

Don’t do this please.

His pleading tone lends to the narrative that this was certainly an unprovoked incident.

Ms Xu told MustShareNews that when her father alighted from the car to check on the damages, the man in black “wanted to come at him”.

That was when one of his friends held him back, and walked over to apologise to her dad.

But as damage was already done to the car, the apology alone did not seem sufficient.

Upon hearing that, the man’s friend allegedly retorted,

And alluded to picking a fight if her father did not wish to let the matter rest.

As her elderly father feared for his safety, he drove off to prevent further confrontation.

Disturbing reactions from the crowd

Another disturbing takeaway from the video, was the insensitive reactions from the surrounding crowd of onlookers. 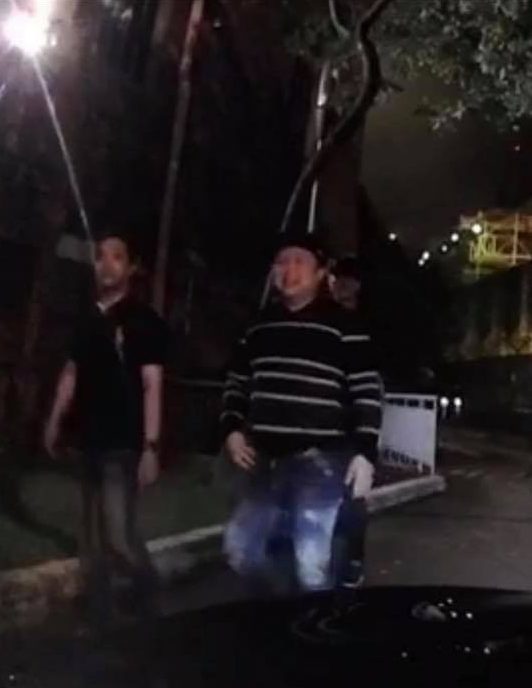 While it cannot be confirmed if they were ‘friends’ of the man in black, this man in a striped black shirt and blue jeans was captured laughing, instead of helping the poor driver. 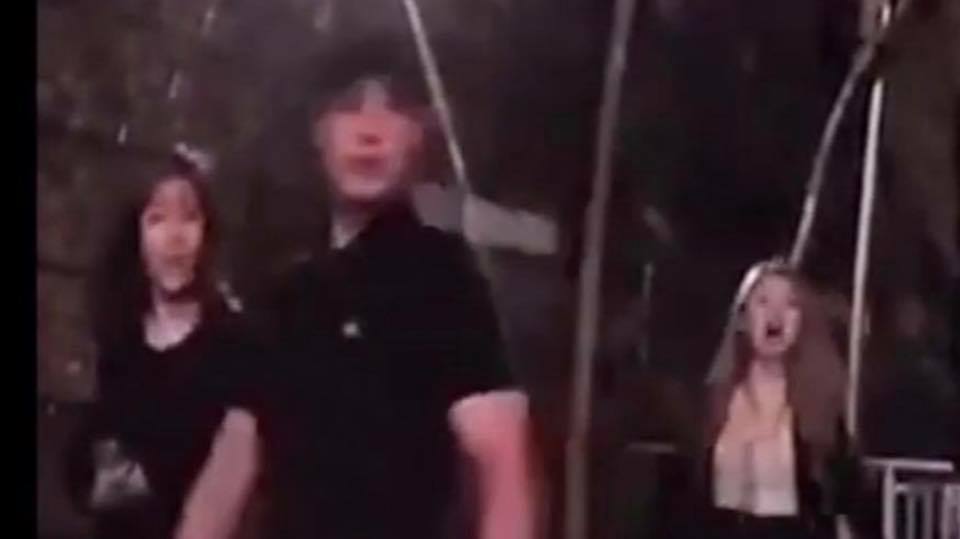 Two women were also seen shouting at the victim, along with the man in black. 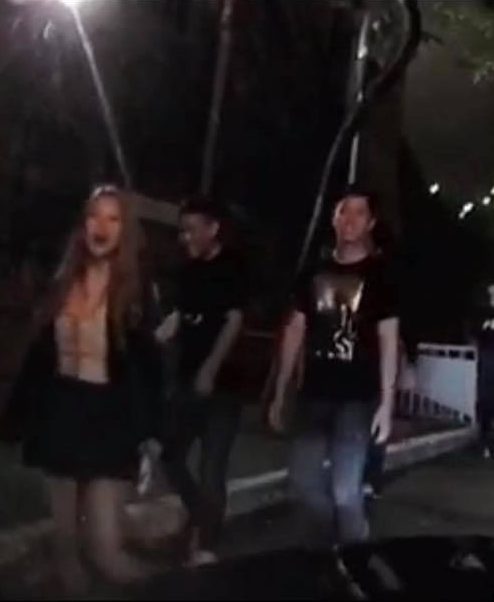 In the final picture posted, the same woman and at least two other men are captured jeering and smiling at the victim.

Clearly, no one thought to confront the man for his brazen and lawless act.

Seeking witnesses to apprehend the culprit

Many netizens have been riled up by the behavior of the thoughtless youth.

One called out the man for “act(ing) hero like a monkey”, warning him not to “bully [an] old man”.

Some even offered free legal advice, or asked to contact the police on the victim’s behalf.

Since a police report has been made, witnesses with any information should contact the police if they recognise anyone within the video.

Here are the details once again:

Date: 5 May 2018
Time: 3am
Location: St James Power Station, slope within the carpark.

Singapore roads should be safe for everyone

Our hearts simply go out to the elderly victim.

His daughter adds that the cost of repairing his car “may cost him an arm and a leg” due to “several dents on the bonnet, roof…and trunk of his car”

We think a 72-year-old plying the streets of Singapore at night, should not have to fear harassment by strangers for no reason.

In fact, no one deserves to be treated that way, regardless of age or gender.

We hope that the culprits involved will be apprehended swiftly and brought to due justice.