While GrabTaxi’s #GrabItBeatIt Campaign has caught the attention of many, the controversial initiative also raised some eyebrows.

Don’t get whats going on? Here’s what’s been happening while you were under a rock.

This notification was sent as a part of the taxi-booking app’s regional campaign in support of the fight against breast cancer.

And the suggestive push notification stirred up a storm on social media.

I find the Grabtaxi boob sms distasteful. I think family history of boob cancer might have something to do with it.

Let’s take a look at what happens once users slide into the app from the notification. 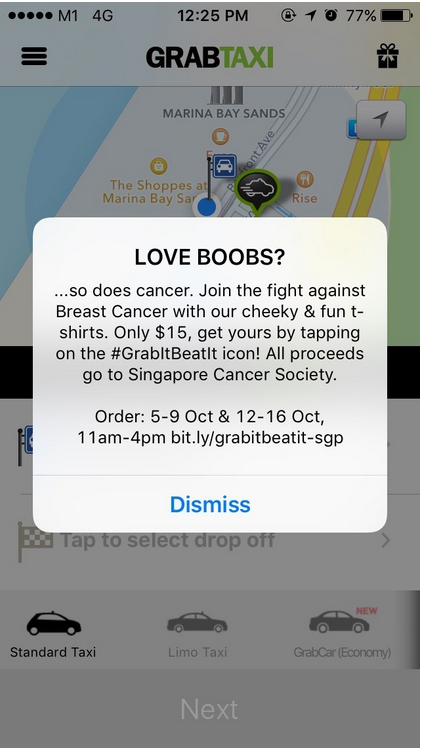 Right… so “Love boobs?” was the slogan they’re used to draw attention to their campaign — that definitely worked.

They even had the slogans ‘Love boobs? So does Cancer’ and ‘Love lady lumps?’ plastered on their obscenely pink GrabCars and taxis.

There was even a video titled “What If Boobs Don’t Exist” which was also launched as part of the campaign.

Would the world be the same without boobs? What if #Nenepok does not exist?
Support Breast Cancer Awareness this… http://t.co/4poovFyYA8

However, the video has since been privated.

That title and thumbnail though.

And yes, they hashtagged “Nenepok”…

While GrabTaxi surely had good intentions for the video, not many took it well.

After @GrabTaxi’s #Nenepok Breast Cancer video, would you trust such a sick company with your safety? #TastelessMarketing

Though the campaign was done out of pure not-so-innocence to raise awareness and rally support for the breast cancer patients, things got weird when sexual innuendo got thrown in the mix for this deadly affliction.

The various lengths and platforms this mobile e-hailing app has sought after for this campaign is definitely commendable. But it’s just a tad bit uncomfortable when fratboy-esque slogans like ‘Love Lady Lumps?’ and ‘Love Boobs?’ are plastered on emails, t-shirts, and cars.

GrabTaxi eventually made a public apology on Twitter several hours after receiving negative reactions to the campaign.

We’re glad #GrabItBeatIt grabbed your attention. It's our campaign to raise awareness about breast cancer and breast health. (1/3)

We wanted to rally women especially the young to self-check as early detection saves lives. (2/3)

We also believe men should play their part to encourage their loved ones to examine themselves. We apologise if it offended you. (3/3)

GRIM FILM, the uploader of the video has also posted a public apology on both Twitter and Facebook. They even privated the video to show their sincerity in the apology.

We are very sorry for what happened. We have removed the “What if BOOBS don’t exist?” video. It is our fault for… http://t.co/Qkipgont6Q

We have to admit that this was definitely a smart campaign. The slogans grabbed enough attention to go viral — just not in the best way possible.

While the campaign got the “marketing” part right, what the company forgot was the cause they were fighting for.

GrabTaxi seems to have abandoned one legitimate cause for the other, as if being gender-sensitive cannot co-exist with advocating for breast cancer awareness. Yes, it was definitely a good way to get people laughing, especially the young, but we just feel like the company took the situation really lightly and weren’t sincere about fighting for the campaign at all.

We are all truly grateful for all your efforts GrabTaxi, but we hope that the execution could be more refined in future.

Nonetheless, do check out their campaign here to learn more on what you can do to support this noble cause!