After the Singapore Tourism Board (STB)’s attempts to advertise on The Guardian backfired spectacularly, it appears that the British news website decided to pander instead to the anti-Singapore Western crowd by publishing an article which chose to focus on the stereotypical Western beliefs about Singapore which have been repeated ad nauseam for decades. The article written by a Melbourne-based journalist went viral, receiving close to 10,000 shares and 1,000 comments just one day after its posting.

Criticism was levied at Singapore’s status as a clean and well-ordered city as being due to its various laws and enforcement methods.

Examples of these laws were the ban on imports of chewing gum (it can be sold in pharmacies), “irritating people with a musical instrument or your own drunkenness” carrying the threat of a fine (compare this to the United Kingdom where people can get arrested for public drunkenness), and the “authoritarianism that is evident as soon as you scratch the surface of life here” (if you’re spending your time here deliberately breaking the law, that is). Is the writer expecting to get off scot-free for being a nuisance to the public while drunk, for example?

To support the writer’s presumably pre-conceived notions about the nation-state, he interviewed, of all people, Alex Au and Leslie Chew, both of whom have been subjected to lawsuits by the Prime Minister for sedition.

Understandably, they had very few good things to say about Singapore, and Au in particular was unabashed in declaring the government “Faustian” (a situation where one forsakes moral integrity for power and success). Chew called the PAP “a bunch of power-abusing hypocrites”, clearly undeterred by his run-in with the authorities.

However, the article was also riddled with factual inaccuracies. In its initial published version, Orchard Road was renamed to “Orchard Street”, a typo which was only spotted and changed after the site’s editors had been notified.

A picture in the article depicts the restrictions in place at Gardens By The Bay, which was captioned as “a sign of daily life in Singapore”. Does the writer really believe that umbrellas and heel shoes are prohibited everywhere in Singapore? I dearly hope not.

The writer’s attempts to “surprise” outsiders also managed to surprise locals, who have also never heard of the rules he listed.

There are other rules that may surprise the outsider. It’s forbidden to buy property in Singapore unless you’re married, which presents a further barrier on top of the high cost of dwellings in the city. Car ownership is also banned, unless you purchase one of a set number of expensive permits first.

Regardless of (or because of?) the factual inconsistencies present, the article managed to generate discussion of all flavours, mostly correcting the inconsistencies in the article. Some, however, were rather more tongue-in-cheek:

Oh, you mean this shirt which no local will ever be caught wearing because of its “tourist” connotations? 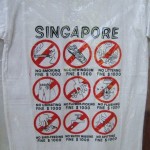 Joke’s on him — the “Singapore Is A Fine City” t-shirt is the ultimate tourist trap and it’s hilarious how shops which cater to tourists continually reinforce this belief of Singapore by selling these t-shirts like clinging to a caricature. We’re glad that he likes it though.

In his dizzy apocalyptic musings, this commenter perhaps neglected the fact that Singapore is still standing despite its lack of natural resources. Essentially he’s PRAISING the government for being able to deal with its inherent weakness of being the “least sustainable country on earth”.

The general consensus was that Singapore is really, really boring — at least in comparison to its neighbours.

Here we’d like to very politely refute the statement that Singapore is boring, by inviting everyone to take a look at this article. There are lots of things to do in Singapore, many even for free!

Sneaky adverts aside, there is the sense that a tired rhetoric spouted by Westerners for decades about our city-state is being brought up, yet again — Singapore is a police state, Singapore is Draconian, blah blah blah. Singapore isn’t perfect — regardless of what the government might try to portray. Does Singapore’s government have room for improvement, notably in freedom of expression, control over mainstream media, and being quick to sue the vocal dissidents of its policies? Of course. But laws exist for a reason and it’s not always to suppress freedom.

To blame the country’s government on Singapore not partaking in the “incomprehensible, exciting chaos of cities found in neighbouring Indonesia or Malaysia” is, dare I say, being extremely narrow-minded. Consider the fact that Singapore is the most Western-accessible country in Asia and you’ll quickly see why libertarians do not like what Singapore stands for — stability and economical success, and the lack of a revolving door of politicians to boo at (since the political hierarchy has barely changed in 50 years). The side-effect of stability is that daily life can become too stable for some, which does not sit well with many libertarians.

There is indeed an underbelly to Singapore that even locals don’t pay enough attention to — look at this article on migrant workers, for example. But without migrant workers forming the backbone of blue-collar jobs here, Singapore may not be where it is today.

The Guardian did a better job at putting the spotlight on Singapore — and by extension, its website — through a controversial article than whatever it was cobbling up when STB was paying them. This inaccurate editorial article, on the other hand, may have undone any good the initial advertising did. It may well dissuade readers from visiting Singapore due to its flawed and biased perspectives.

Or maybe this is The Guardian’s strategy to get even more advertising from STB to counteract this given their record of questionable advertising decisions.