Everything you ever wanted to know about PAP

This is the ninth and final article in a series going through the parties contesting in the General Elections.

We’re finally here! The biggest, largest, strongest party in Singapore — known for its long-time rule and synonymous with the name of one Mr. Lee Kuan Yew — is now undergoing a transitional period following his death. Some may say that the country is still in mourning. Regardless of (or because of) this momentous event, a General Election has been called on the 50th year of Singaporean independence, less than a month after the nation celebrated its birthday and less than a year after the death of LKY.

Call it whatever you like — consolidation of power, leadership renewal, fear over losing more votes if the Elections are to be held next year or in 2017. Elections are happening now and the People’s Action Party wants to form the next government, as it has done for 50 years. If anything, they have the track record and results to show: Singapore is a 1st World country with no natural resources, something completely unheard of previously. Having already done the impossible, what else can they do for Singapore?

For now, they are trying hard to keep the ship balanced over many issues which have plagued Singaporeans — some of their own doing. The PAP’s mandate is not to make policies solely to please the people, however. Their eye is always, always on the future and long-term. Will this be enough to convince voters?

Let’s take a closer look at the Men in White. 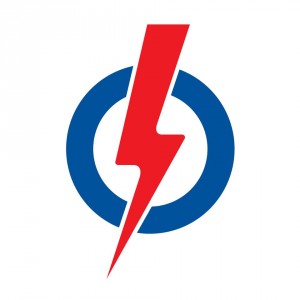 The 1950s to 1970s was a period fraught with communism and imperialism, following World War II when the British fell to the Japanese, and many were taken in by the two concepts of equality and independence. Lee Kuan Yew, who had seen with his own eyes the incompetency of the British to rule Singapore, formed the People’s Action Party in a bid for full independence. Initially people-centric (hence People’s Action Party), it made a shift to the centre after expelling its leftist faction, and further to the right in the 1960s.

Since independence, the PAP has won every General Election with an overwhelming majority, even in 2011, when the Workers’ Party captured Aljunied GRC, the first time since the Group Representative Constituency (GRC) concept was introduced in 1988.

In return for the people’s support, the needs of citizens were taken care of, and improvements are still being constructed yearly. Literacy rates are among the highest in the world, and Singapore is known widely for having a high standard of living, as well as being orderly and stable thanks to its strict rules.

However, many controversial actions have been taken by the PAP in order to remain the dominant party in politics. These include the controlling of traditional media such as television, radio, and newspapers.

The PAP has developed its own ideology pertaining to Singapore’s unique circumstances. Due to these circumstances, the PAP’s ideology became that of pragmatism, meritocracy, multiracialism, and Asian values.

As a small island with no resources, the PAP made moves to ensure Singapore’s survival; foreign investors and companies were enticed to set up shop in Singapore. English became the first language in schools.

With such measures, Singapore was able to develop its economy and thus provide its people with a better life.

Meritocracy was promoted to provide a fair system for all ethnicities, which tied together with multi-culturalism — nobody could be said to be disadvantaged by the system, since people were judged by capabilities, and nothing else. Everyone was given the opportunity to have higher income; all you had to do was study hard and get good grades, and your future would be secured. This was particularly effective in raising the education levels in Singapore, and the education system here is studied closely by many other countries.

The concept of Asian values was espoused by Lee Kuan Yew in the 1990s in opposition to Western-styled liberal democracies, citing Asia’s history of Confucianism as a reason why Western ideals would not work in Singapore.

3. Blur Sotong: What are the policies and proposals being advocated by PAP?

Their manifesto this year is “With You, For You, For Singapore”. There is a clear emphasis on Singapore’s future and willingness to serve the people, and much citing of past records were made, such as:

We made the leap from mudflats to metropolis…

As the party with the most history, they have an advantage in being able to draw on its history and what they have or will bring to Singapore, while opposition parties are limited to alternatives and solutions. There is also a clear emphasis on doing all this great stuff ‘together’ with the people, specifically for ‘you and your family’.

Improvements to each constituency have been promised for voters if the PAP are voted back in, including MRT lines, more covered walkways, bus interchanges, and the ilk. Efforts have been made to relook policies, such as the influx of foreign workers, with restrictions to stem the inflow as well as making it more difficult for employers to hire foreigners if they do not hire Singaporeans first.

Here are the policies and proposals, taken directly from their manifesto: 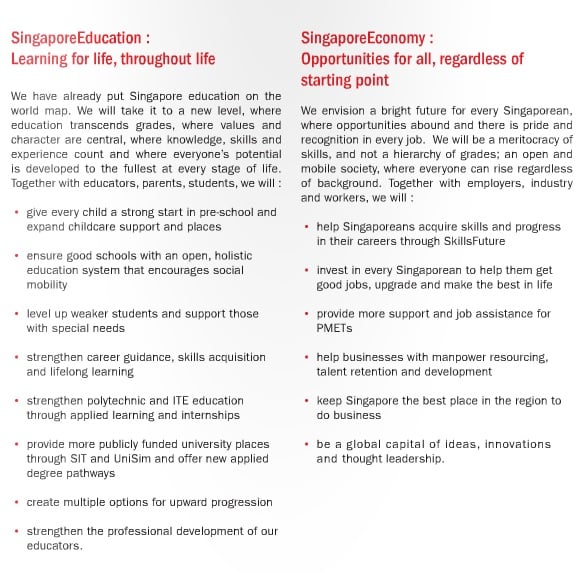 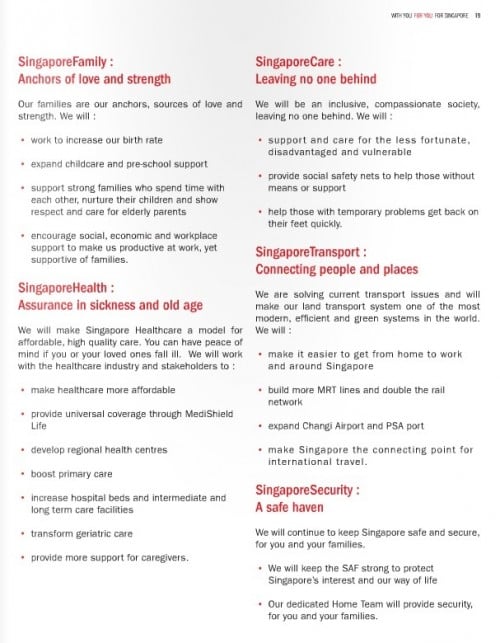 Short answer: EVERYWHERE. This place is their territory, you know?

Long answer: Every constituency will be contested by a PAP team or person, and they are realistically the only party who can form a majority in Parliament on their own.

The PAP has a nifty feature on their website where you can search for who’s running in your area simply by entering your postal code.

But for easy reference, we’ll list out all the candidates here anyway for your perusal:

5. Blur Sotong: PAP has referred extensively to the AHPETC saga before, and during the elections period.

Not hard to see why they would. Although opposition town councils have largely been run well, Aljunied became the first GRC under opposition control. It was a chance for WP to show that they could run a GRC as well as an SMC. Furthermore, five years ago Lee Kuan Yew told Aljunied residents that they would have ‘five years to live repent’ if they chose WP.

The saga may just be a continuation of the PAP’s attempts at showing whether WP can handle running one town council, let alone Singapore. It should be noted that WP did submit some of its financial statements late, and that there were lapses in running the Town Council.

PAP simply took the chance to remind voters about these lapses.

6. Blur Sotong: But didn’t the WP already reply to PAP’s allegations and largely sorted out its issues?

Sure, but as the saying goes: “Anything can be used as a weapon.”