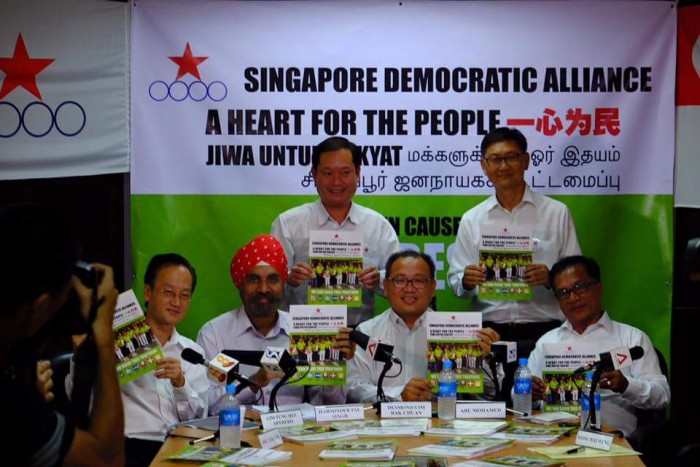 Everything you ever wanted to know about the SDA

This is the fifth in a series of articles going through the parties contesting in the General Elections.

Chiam’s Singapore People’s Party was a founding member of the alliance in 2001, which also contained the National Solidarity Party (NSP), the Singapore Justice Party (SJP) and the Singapore Malay National Organization (PKMS). In 2007, NSP left, followed by SPP in 2011 after the other members of SDA opposed a decision to bring the Reform Party into the alliance.

The same year, the Singapore National Front (SNF), a group of Malay professionals formed out of an exit group from PKMS, entered the SDA. However, they failed to send any candidates for elections and it seems they’ve fallen out of the public eye since.

Only Chiam See Tong succeeded in obtaining a seat in Parliament in 2006, while the rest faltered in their bids with low vote percentages.

SDA is known for their online rallies, but they don’t seem to understand tools like YouTube too well; leader Desmond Lim commented that a reason for the mockery of the online rally he did in 2013 was because of the shoddy subtitles that YouTube rendered.

Yes, everyone knows that, which is why no one uses these subtitles.

He has also requested that voters not look at said video now, as it does not apply to 2015.

1. Blur Sotong: Who is the leader of SDA?

Desmond Lim Bak Chuan is the current leader and has been in politics for 23 years, but has lost every time he stood for election.

In spite of numerous setbacks, the worst of which was in the 2013 by-elections at Punggol East SMC, losing his election deposit and only garnering 168 votes, he has continued to campaign, giving us this gem of a quote:

“How can a country depend on you if you give up just after losing once?”

His doggedness has been a constant feature of his life — going from sharing bread crumbs with his siblings for three meals a day, speaking his first words at 7, to obtaining a Master’s degree in Engineering Management. In 2013, he was widely ridiculed for his poor command of English in an online rally, but even that wasn’t enough to stop him.

When you think about what he’s done through his life, public ridicule is the least of his worries.

SDA began as a coalition for various opposition parties to contest under one banner. These parties are liberal in nature, although the PKMS primarily champions Malay rights.

3. Blur Sotong: What changes are being advocated by SDA?

They will be contesting in the Pasir Ris-Punggol GRC with 6 candidates, three of whom are new faces. The average age of the candidates is kinda high at 52, although according to Desmond Lim, they have volunteers in their 20’s around during their walkabouts. 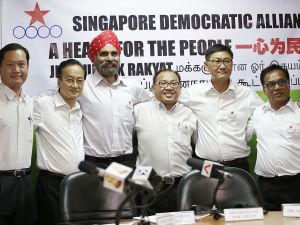 Desmond Lim gets +1 because he looks like a cuddly teddy bear. You go, you. Win the women’s hearts!

5. Blur Sotong: Desmond Lim’s English really isn’t very good, so how can he be the voice of the common people in Parliament?

He can speak Mandarin.

It is a fallacy that candidates have to have a strong command of English to be able to speak in Parliament, as MPs can speak in all 4 languages.

He’s also a quote machine; just look at the amount of quotes I’ve included by him. This guy keeps things simple and memorable, even if he occasionally mixes up his plurals.

Besides, SDA have Harminder Pal Singh in the group, who is easily one of the best speakers around.

Just check out his speech on Nomination Day.