Did you feel a sudden sense of deja vu this morning? Like there was a glitch in the Matrix? Did it feel like the morning of 23 December 2014 all over again?

Just when everyone was busy celebrating the news that we are going to have an extra public holiday on 7 Aug, controversial blogger Xiaxue released a new post on Gushcloud, titled The Big Gushcloud Expose 2.

To keep matters short, we bring you the juicy bits and people you need to know:

He recorded a private  conversation with Gushcloud Co-Founder, Althea Lim. In the conversation, he mentions that his friend, Sheng Yu, was at a party and told all the NUS kids at the party that Gushcloud forced him to falsify documents.

She circulated a brief for their client SingTel, informing influencers to complain or lament about their experiences with the other telcos. The influencers would eventually switch over to SingTel’s student plan, and relate the entire story to their followers. These influencers would gain rewards, such as free phone bills, based on the number of sign-ups they successfully influenced.

The same complaints are brought about about Gushcloud inflating their statistics, especially those of Yan Kay Kay’s Youtube channel.

Gushcloud responded on their Facebook, with a statement explaining that they were engaged by SingTel to run the Youth Plan Campaign. They also mentioned that the publicly posted brief was an internal brief prepared for the Gushcloud influencers focused on the services and strengths of SingTel.

SingTel, on the other hand, replied posts on their Facebook page with similar-sounding statements. 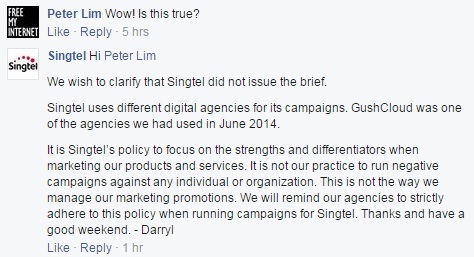 Basically, SingTel claimed that the brief was not issued by them. SingTel also mentioned that it is in their marketing policy to focus on strengths and differentiators of their products and services. SingTel then went on to assure their audiences that this is not the way their campaigns are managed.

Incidentally, today (14 Mar) happens to Nuffnang’s birthday party. Nuffnang is one of Gushcloud’s direct rivals, and counts Xiaxue as one of their influencers.

But we have to question the timing of this whole thing. Xiaxue’s release of the expose on her parent company’s birthday seems a bit coincidental.

Xiaxue’s allegations do put question marks on the way Gushcloud does business. While we’ll never really know the inner goings-on about how they work, Gushcloud does need to be more transparent, especially after these allegations.

At the start of her Gushcloud Expose posts. Xiaxue maintains that her only motivations are to uncover the truth about how Gushcloud does business. She is not, at all, doing it for her personal interests.

Cleaning up the industry

But digging up dirt is just half the work done. If Xiaxue really wants to clean up the industry, she should be working to push for more regulations in the industry, and work to have everyone follow these rules. The online blogging industry is currently largely self-regulated. Only when everybody is forced to follow the same rules, without any loopholes, can the online blogging industry be truly considered to be clean. All these mud-slinging, meanwhile, only decimates consumer and advertiser confidence in the industry, affecting BOTH companies.

Does any of these really matter?

Meanwhile, as we look at the bigger picture, we realize that life still goes on. As sure as Death and taxes, major players in any industry will butt heads and throw allegations around. But we have to ask ourselves why we’re reading all of this in the first place, when we could all be planning for the 7-10 Aug long weekend.